UP Professors on K to 12: Lengthening the Suffering, Increasing the Burden 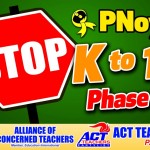 It is true that the Philippines is one of the few countries in the world that has only four  years of secondary education. It is also true that with a conservative figure of around 35 students per teacher in high school, the Philippines has currently the worst teacher student ratio in the secondary level of education  in the East Asia and the Pacific region. For example, Malaysia and Singapore have a ratio of 14 pupils per teacher, Thailand 19, Indonesia 12, Vietnam 18. (All data cited represent the latest available from UNESCO.) It furthermore cannot be denied that the Philippines allocates only a measly 2.6 % of annual Gross Domestic Product (GDP) to the total education budget in contrast to Indonesia, Thailand and Singapore which allot more than 3 %. Vietnam on the other hand allocates more than 5 % while Malaysia spends close to the ideal 6 % yearly. The industrialized nations of the world spend on average 6 % of their GDP on education. The Education Development Index (EDI) which ranks countries according to compliance with the United Nations Millennium Goal of “Education for All” puts the Philippines at rank 85 while neighboring Indonesia and Malaysia are 69 and 65 respectively. The lack of adequate budget and resources has consistently been identified in the past as the main reason for the deterioration and demoralization of Philippine education. 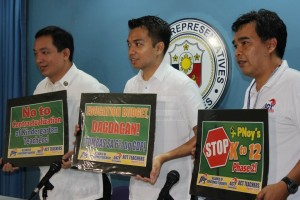 Bhutan, the setting of the fictional Kingdom of Yangdon in the telenovela “The Princess and I” underwent a similar transition to that which the Philippines will undergo under the so-called K to 12 Program. In 2003, Bhutan lengthened secondary education from four to six years. Bhutan may be a poorer country than the Philippines in many respects but it seems to have a better sense of educational priorities. In 2001, two years before the change to six years, it increased public expenditure in education as percentage of GDP from 5.8% to 5.9%. After two years of implementing the transition, public expenditure for education rose to a very high 7.2 percent of the GDP. (It has since then been lowered to around 4 percent currently.) In 1998 its teacher to pupil ratio was 38.6, but in 2006 this had been reduced to 22.8 even with the additional two years of secondary education.
Having learned nothing from Yangdon, even as it currently implements K to 12 (which the Department of Education estimates will cost P150B), the Philippine government has made no significant gesture at increasing the budget for education as a whole and towards improving such important indicators for quality as the teacher-pupil ratio. 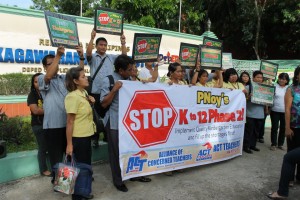 However, the more fundamental question is, does the Philippines really have to undergo such a transition to six years? A study by Felipe and Porio in 2010 has shown that the deplorable, bottom-rung results of the Philippines in international Math and Science tests (TIMMS) is not the result of merely having a shorter education cycle. They discovered that elementary students from countries such as Russia, Latvia, Hungary, Italy, Egypt and Iran with even shorter elementary cycles than the Philippines were easily able to surpass the Filipino 4th and eighth graders. It was also determined in another study that although Malaysia and Brunei had longer education cycles, it turned out that the Philippines had actually allotted longer hours of instruction time per subject. These longer hours of instruction however did not translate into higher scores. The superior results of these other countries could probably be better explained by the higher percentages of GDP reserved for education as a whole and their use of more comprehensible national languages in math and science. Some even less developed and poorer countries than the Philippines do indeed have longer basic education cycles. But this does not imply that these longer periods necessarily translate into higher quality. These may instead merely result in longer periods of “education” languishing in decrepit and deplorable conditions.
The supposed “shortage” of time in teaching is simply not as urgent as the other major shortages which have plagued Philippine education for decades. The notion that the curriculum needs to be “decongested” implies that there is not enough time to learn everything that must be learned. But who or what dictates this “everything” which supposedly must be learned and the number of hours which it must be taught? What are these knowledges, or curricular contents, which are supposedly comparable and exchangeable internationally? It is taken for granted that these are derived from some vague “international standards.” However these are actually dictated and imposed by international business interests and their spokesmen in the World Trade Organization (WTO) and in treaties such as the General Agreement on Trade in Services (GATS). The loss of national sovereignty in determining national standards and priorities in basic education is mystifyingly taken for granted by the “anti-congestion” proponents of K to 12. The deep erosion of academic freedom in institutions of higher education in the name of neo-liberal ideology, managerialism and the domination of market forces is furthermore accepted without question. 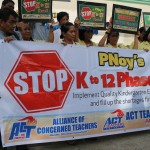 Another reason cited by the Department of Education in defense of the K to 12 Program is that the Philippines must lengthen secondary education by two years in order to comply (at least on paper) with “international standards” set by treaties such as the Bologna Process and the Washington Accord. The explicit principal intent of the Bologna Process is to make European Universities “more competitive” internationally in attracting foreign (especially Asian) students. Ironically, our “compliance” with it is intended to make us more eligible buyers and “consumers” of the educational “products” which they offer. This has obviously nothing to do with Philippine economic interests. On the other hand, the government’s labor export policy also faces the very real obstacle posed by international professional standards which supposedly require twelve years of basic education for the practice of professions. In the contemporary situation in which at least 45% of Filipinos live in poverty, a better proposal than making all poor households pay more for the additional two years of high school would be to make those who want to work or study abroad pay for the additional costs through other appropriate systems of assessment and accreditation.
Rather than spreading further the education budget for this big project, which merely reflects the politics of educational reform in our country, the State should concentrate its efforts and budget in basic education -improving the quality, building science education, scholarship, establishing centers for teachers continuing education. We can be certain that the K to 12 Program of the current government will not raise the quality of Philippine education, instead it will only lengthen the suffering of students in a decrepit, corrupt and miserably underfunded system. The additional two years will also constitute an additional and insupportable burden among the majority of poor families struggling to put their children through high school. Finally, the K to 12 Program will not redound to the benefit of the Filipino people since it firmly puts foreign interests before the development priorities and educational needs of our country.
Congress of Teachers/Educators for Nationalism and Democracy –University of the Philippines(CONTEND-UP)
Member, Alliance of Concerned Teachers-Philippines (ACT-Phils.)
Teacher Groups