The problem with Aquino's K to 12 program 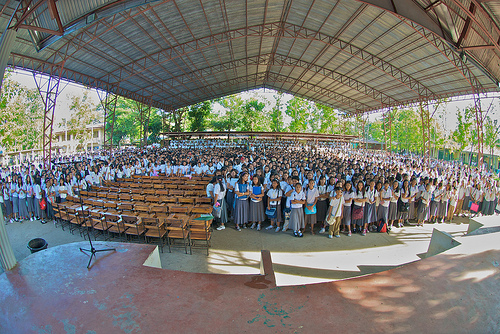 It is not that difficult to understand why, despite the additional costs the program would entail, the public generally appears to take President Benigno Aquino III's K to 12 basic education program sitting down.
That is if state-sponsored surveys are to be believed. The House Committee on Basic Education claims majority of the public surveyed during its consultations favored the K to 12 program, while separate consultations by theDepartment of Education (DepEd) showed 77 percent of the 1,417 people consulted nationwide supported Aquino's flagship education program.
For one, DepEd tried to make the lengthening of the basic education cycle palatable by saying the additional junior and senior high school levels would make students ready for the world of work when they graduate in high school.
Even as public elementary and high school education continues to be free under the new system, other expenses such as transportation, allowance, food, school projects and other school expenses would still burden families and take up a significant portion of the family budget. However, what apparently makes parents willing to shoulder such costs is the empty promise of employability after their children receive their hard-earned diplomas.
In the present scheme of things, the function of education is already reduced to the individual's mere employability. The K to 12 program reinforces this societal function of education. Society also continues to regard education as essential to social mobility, an “investment” worth undertaking as the “costs do not outweigh the benefits.”
Owing to its highly commercialized character, tertiary education has also become inaccessible for many Filipinos. Dominated by the private sector, higher educational institutions charge students with sky-high tuition and miscellaneous fees that remain unregulated and unchecked. Even as college education gives the student an advantage in the vicious and highly-competitive search for job opportunities, many youths forgo college schooling simply because they cannot afford it. This makes the K to 12's employability factor more appealing and acceptable to the parents, who are made to believe that under the new education system, college education is a path which is not for everyone to tread.
Lastly, any educational reform almost always appeals to many especially since there is a general consensus that our present state of education is in disarray. The word “reform” is always easy for the public to swallow because any move to veer away from the present arrangement of things is viewed as a welcome development.
Government officials and other advocates who are so insistent in adding two more years in the school cycle should thus join the clamor for higher wages and the regulation of prices of basic commodities and services, push for the expansion and institutionalization of student financial support systems and scholarships, and more importantly, fight for greater state subsidy to education at all levels. Any education reform program that does not take into account economic and other social factors that affect a person's schooling is bound to fail especially when its supposed beneficiaries cannot keep pace. 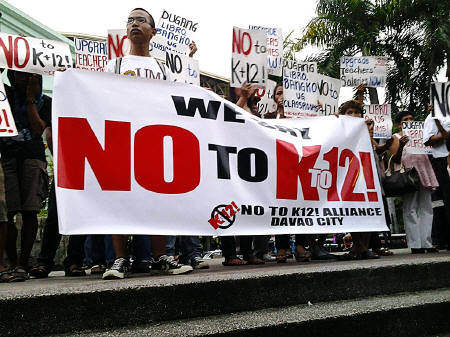 The public should not take the K to 12 program as a bitter pill to swallow. It should not pass judgment on the program based solely on its glittery promise of honing the student for employability, and the additional costs that parents have to shoulder. The heavy financial burden that comes with the implementation of the program is just one of the many issues on the surface. Basic problems such as lack of teacher training and the failure of the government to address input gaps are also considerations that if left unaddressed may imperil the full implementation of the program.
But a fundamental flaw of the program that merits equal attention is its inability to address the problem of decreasing access to education. Aquino's K to 12 is anchored on improving the competencies of in-school youths but fails to consider the situation of the growing number of out-of-school youths in the country who should enjoy the universally-acknowledged right of access to educational services. Furthermore, school survival rates are not merely influenced by the student's mental and cognitive abilities. Poverty, the peace situation, and other societal factors all contribute to the increasing drop-out rates that cannot be remedied by mere curricular reforms and additional years of schooling. What use does a more “enjoyable” learning experience have when the student cannot even afford to go to school due to his or her financial woes?
The K to 12 is marketed as a program wherein the student is given the option to pursue different paths upon graduation: employment, entrepreneurship, and higher education. This freedom of choice touted by the K to 12 proponents, however, is illusory since the student's choice is actually limited by the reality that higher education has become a privilege and that the worsening economic conditions in the country are pushing Filipinos to seek jobs instead of pursuing higher education.
The program's objective to produce “globally competitive graduates” also run counter to the supposed freedom that the student possesses in choosing his or her career path. In reality, under the present economic set-up, the prescriptions of market dictates shape our choices and decisions, be it in the brands we purchase, the artists we subscribe to, the course we take in college, and even in the profession or occupation we wish to have. With the government systematically and aggressively promoting the export of labor and the dependence on external sources of jobs and economic growth through its economic policies, it can be expected that majority of the jobs and fields of learning that the students would be pursuing are those that are in tune with the demands of global market—call center jobs, technical-vocational jobs abroad, etc. It is contemptible, how at a young age people are told to pursue whatever dreams they have but education agencies would be coming up with a list of courses that are highly discouraged simply because they are not what the global market demands.
Thus, the observation that the real motive behind the K to 12 education reform program is to further intensify labor export by systematically targeting the country's young labor force, and further service the demands of multinational firms is not without basis.
As seen from the K to 12 curriculum, there is a noticeable focus given to technology and livelihood education (TLE) during high school, with the learner even obtaining a certificate of competency required by industries. In Grades 7 and 8, TLE subjects are exploratory, which means that the learner is given the opportunity to learn 5 basic competencies: 1) mensuration and calculation, 2) use of tools and equipment, 3) interpretation of plans/drawing, 4) occupational health and safety in the workplace, and 5) maintenance of tools and equipment. In Grade 9, the learner chooses one course to specialize in from among the exploratory courses and in Grade 10, he/she pursues the TLE specialization that he/she has chosen in the previous grade in order for him/her to obtain at least a National Certificate Level I or Level II.
There is completely nothing wrong with developing the technical and vocational skills of the citizens if these are oriented towards genuine economic development through national industrialization. However, the present economic orientation of the country shows that tech-voc courses supply either the demands abroad or the pool of skilled reserve labor servicing multinational firms which take advantage of the country's cheap skilled labor.
While the intentions seem laudable at first glance, the underlying context of the implementation of the K to 12 program could be best understood by looking at the government's problematic general development framework that is the Philippine Development Plan, which seeks to reinforce the country's adherence to the flawed development paradigm of neoliberal globalization. The K to 12 program's thrust of producing “21st century graduates” is nothing but an affirmation and a reinforcement of the country's role in the uneven world order where economies such are ours are molded according to the interests of the powers-that-be. Thus, the K to 12 education program can be considered a sine qua non for the fulfillment of the government's agenda of trawling the path of the globalization project, which has only made the country vulnerable to the world economic crisis and has yielded the very crisis that plagues Philippine education.