Showing posts from April, 2016
Show all

An Appeal to Pearson Shareholders 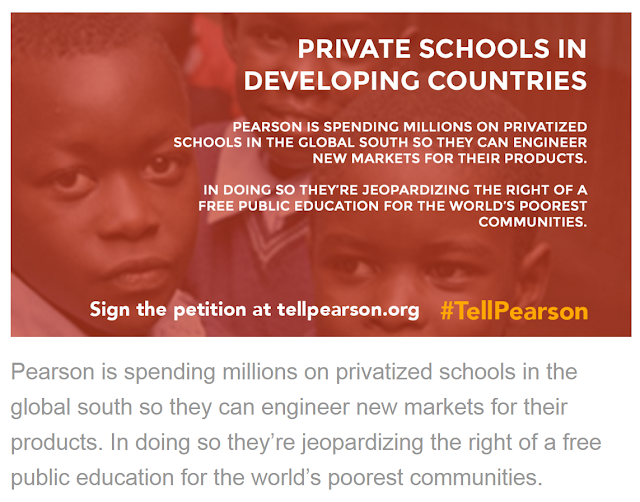 A public education system in decline, a government that is more than willing to lift restrictions just to entice privatization of education, and a globalized economy that now can easily dictate what wages should be and not ought to be can easily combine to form a destructive corporatization of basic education. Learning outcomes in basic education are closely tied to the quality of life of children both inside and outside schools. This is a fact strongly supported by research. No corporation therefore can claim any ability to turn around failing schools in poor communities or developing countries without improving first the lives of the children in these depressed neighborhoods. Randi Weingarten, president of the American Federation of Teachers is attending a shareholders' meeting in London. The company is Pearson. In an email circulated by an action network, Weingarten describes Pearson in the following manner: Pearson’s brand is becoming toxic because it promotes bad policy th
Post a Comment
Please click to read the rest of this post >>>

With Regard to Climate Change, There Is No Such Thing As "Clean Coal"

In a lightning round of questions, Mar Roxas, a candidate for president in the Philippines, said that coal as an energy source is not damaging to the environment. Roxas cites "clean coal" and expresses no opposition to the current plans of the Aquino administration to build more than an additional score of coal plants in the country. This, of course, goes way against an agreement the country has signed in Paris in which the country says it is committed to reduce its carbon dioxide emissions by seventy percent. With regard to carbon emissions, with regard to climate change, there is no such thing as "clean coal". It is one thing to be vulgar or offensive with words, something another candidate for president in the Philippines is now known for worldwide. But far more insidious is a wolf in sheep's clothing. Pretending to be environmentally friendly while doing exactly what harms the environment. "Clean coal" is really a response to other pollutan
Post a Comment
Please click to read the rest of this post >>>

Failing Schools Tell Us Much More About Ourselves 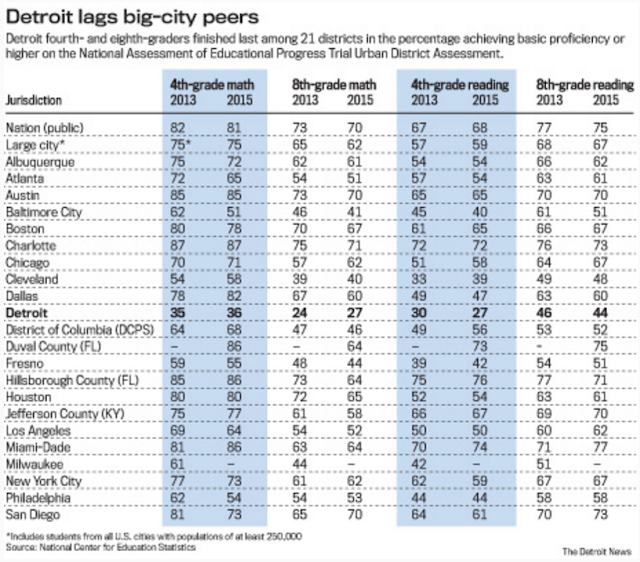 Some place their hope in education as a solution for social ills. Unfortunately, what happens inside schools is often more of a symptom than a cure. When children in schools fail, it only means that we as a society are failing to meet some of the basic needs of our children. When children fail to learn how to read, it simply points to our own failures. Children from the city of Detroit in the state of Michigan in the US are among the lowest scorers in the country's National Assessment of Educational Progress (NAEP). Above copied from Detroit News Failing test scores, however, is not the end of the story. Failing schools are frequently associated with other bad news. Here is another one from Detroit. Above copied from NPR In the above piece of news, it is alleged that a dozen principals, working independently, have given contracts for school supplies to a vendor, and in return, have received a share of the profit. It is indeed sad to see that on top of failing schools,
Post a Comment
Please click to read the rest of this post >>>

I Am Poor. What Would Help Me Succeed in School? 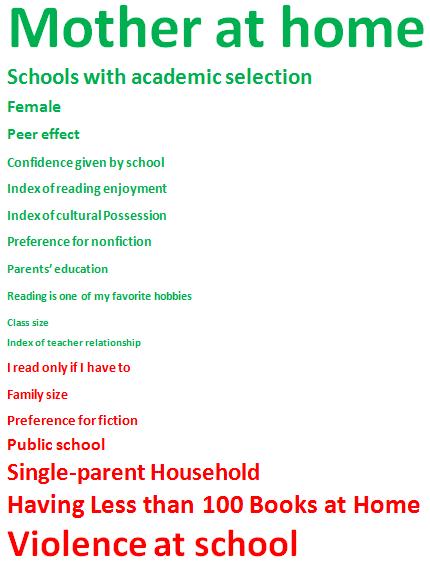 Poverty crushes education.  However, it is also true that there are poor children who succeed in school. For instance, I am an anecdote. I am one hundred percent sure that there are other examples. Citing several anecdotes, however, is not the same as data for one simple reason. We already know that these are exceptions. Nonetheless, examining these exceptions with an appropriate objective can be meaningful. A paper published in Comparative Education Review :  "Against All Odds: Outstanding Reading Performance among Chilean Youth in Vulnerable Conditions" by Gabriela Gomez Vera, Juan Pablo Valenzuela, and Carmen Sotomayor, looks at characteristics in households, students and schools that correlate with scores of poor children in an international standardized reading exam. The educational system in Chile represents one of the most socio-economic segregated schools in the world . Paying attention to scores of students from Chile therefore provides a good set of data to explor
Post a Comment
Please click to read the rest of this post >>>

The Role of Research in Schools 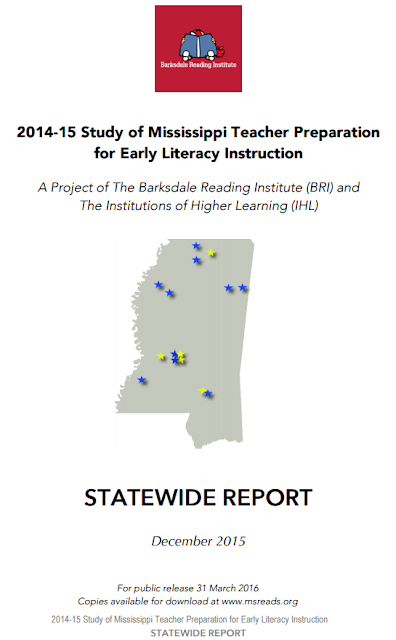 Education policy makers are often quick to claim that reforms they introduce are informed by research. Unfortunately, in education, there is usually a gap between research and practice. In the state of Mississippi, a study by the The Barksdale Reading Institute (BRI) and The Institutions of Higher Learning (IHL) found that established research-based principles of early-literacy instruction remain largely unapplied in teachers' preparation and practice. Teaching colleges fail to teach teachers practices that are currently supported by evidence. Consequently, practices that become widely used in classrooms are those unsupported by research. Often, these practices are even misinterpretations of what research says. Click here to read the entire report The research work the study focused on that is found largely missing in teaching colleges' curriculum is not actually that recent. BRI and IHL looked at teacher preparatory programs in Mississippi to check if  evidence-based p
Post a Comment
Please click to read the rest of this post >>>

Why the Philippines' K to 12 Is Unconstitutional 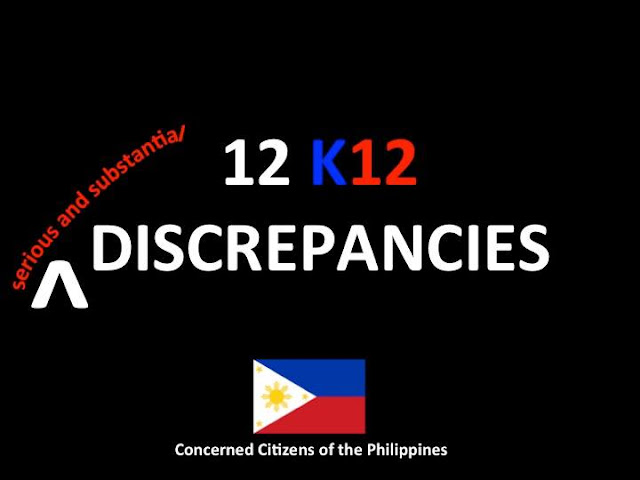 A group called Negros Movement for Quality Education  shares on Facebook contents of one of the petitions before the Philippines Supreme Court against Republic Act 10533 , the law behind the new DepEd's K to 12 curriculum. Negros is the fourth largest island in the Philippines and is composed of two provinces, Negros Occidental and Negros Oriental. It has a population of about 4 million. One of its cities, Bacolod, is home to a Parents Teachers Association Federation that is highly critical of DepEd's K to 12. Although the petition focuses mainly on major discrepancies between the bill passed by Congress and the version signed into the law by the president, it is clear that there are likewise objections to the substance behind the differences between the two versions. Here are some of the discrepancies that are deemed substantial and are therefore clearly contrary to the initial goals of lawmakers. Science is supposed to be introduced as early as first grade Teachers, pa
Post a Comment
Please click to read the rest of this post >>>

This blog does receive comments on Facebook  but it is rare when people directly post their comments on this blog. The blog received one comment last night and I would like to share the first two paragraphs of that comment: "The Philippine government doesn't want the citizens knowing how far behind the rest of the world their educational system is. The last time Philippines took international tests that I am aware of was 2003, with their fourth graders scoring 358 against an international average of 495 in Math and 332 against an average of 439 in science. There is a lot of false pride instilled in the students with celebrations, ribbons, balloons, and downright delusional thinking. My sister in law was a highly decorated student, representing her school in regional mass communications events. She didn't know Philippines was #3 in the world for murdered journalists nor the corrupt practices in Philippines where journalists take bribes to write the exact opposite of the
Post a Comment
Please click to read the rest of this post >>>

Fundraising in an Elementary School

Back in the Philippines, I remember pageants and lotteries as ways schools use to raise funds. In "T he Culture of Beauty Pageants in the Philippines ", Teresa Martinez writes, " The wisdom of holding beauty pageants is especially evident in fundraising activities since most families will back up their candidates by buying tickets. " Lottery tickets can be also successful if the prizes are attractive. Such fundraising activities, of course, are not necessarily signs of a collaborative community. Last night, I had the opportunity to attend a fundraising in my children's elementary school. It was a spaghetti dinner, a fundraising event of the fifth grade class in the school. The school cafeteria was packed. Some had to wait to be seated. The fifth graders, their parents and teachers are serving spaghetti, lasagna and salad. Of course, there was dessert. The fifth graders were waiting on tables. Each fifth grader had a piece of paper to mark
Post a Comment
Please click to read the rest of this post >>>

"Diwata-1" and What It Takes to Become a Scientist 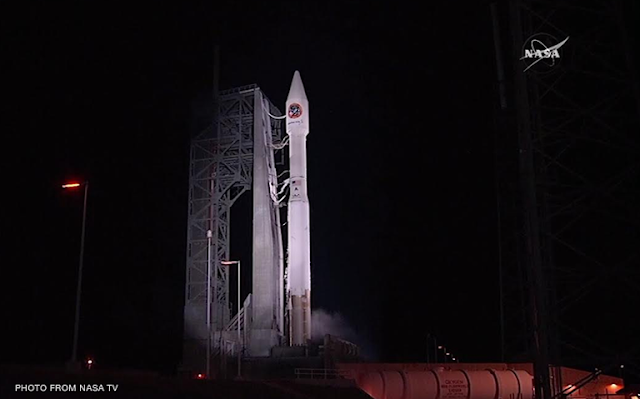 Two weeks ago, the first-Filipino made microsatellite named Diwata-1 was brought to outer space by the Atlas V rocket. Diwata-1's objective was to capture images for weather patterns, agricultural productivity, and land and water resources in the Philippines. The microsatellite was part of an initiative from Hokkaido University and Tohoku University. Countries like the Philippines, Vietnam, Indonesia, Malaysia, Myanmar, Bangladesh, Thailand and Mongolia were given the opportunity to build a network of microsatellites that would monitor the region's weather and natural resources. March 23 was a significant date. After all, it paved way for the first Philippine satellite to be launched before the end of the Aquino administration. Above copied from CNN Philippines   The first Philippine microsatellite, Diwata-1 Above photo copied from ASEAN Military Defense Review Sadly, a week later, one of the Filipino engineers, Paolo Espiritu, shared on Facebook grievances against
Post a Comment
Please click to read the rest of this post >>> 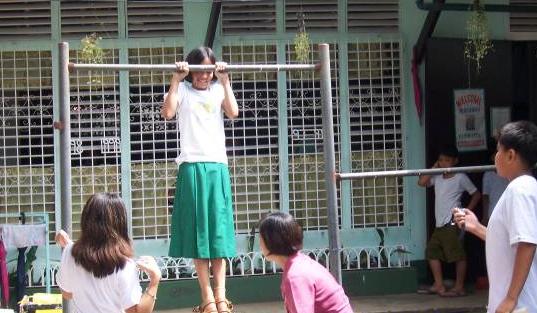 Once in a while, one can in fact stumble at some nuggets of wisdom in social media. A candidate for local office is stating that classrooms will be built for public schools with the help of a provincial governor and a senator. It was not in this statement where I found a rare insightful point. It was in one comment to this post that said that primary schools should not be regarded only as buildings with classrooms. Children need recess. Children need a place to play. Recess and play are different from physical education Although recess and play increase physical activity that builds strength and fitness, and improves health, free play among children is so much more than just physical education. Anthony D. Pellegrini and Catherine M. Bohn-Gettler have provided a good summary of what research says about the Benefits of Recess in Primary School . Research supports the notion that recess and free play are important for the following: physical fitness, classroom behavior, social skil
Post a Comment
Please click to read the rest of this post >>>
More posts