Equity Is Possible Without Sacrificing Excellence 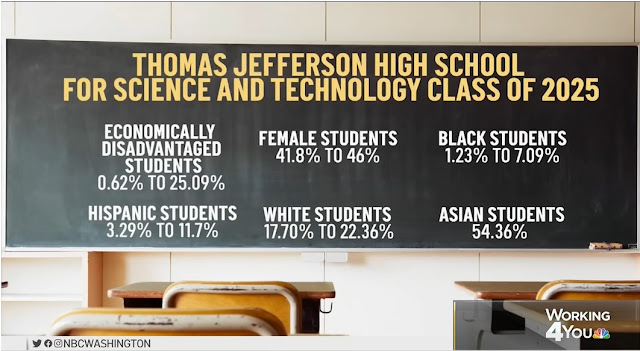 The class of 2025 of Thomas Jefferson High School for Science and Technology in Fairfax County has greater diversity. By removing the admission fee and entrance examination, and introducing a more holistic view of applicants plus assigning slots to middle schools, we now have one in four students (25%) from economically disadvantaged homes. That is a marked improvement from 0.6% in the previous class. The grade point average of accepted students for the class of 2025 is 3.95, similar to previous classes. Equity is indeed possible without sacrificing excellence. Above copied from NBCWashington Equity being possible without doing away with excellence is surely an important lesson to be learned. However, there is an additional lesson that we should not miss. Albeit the class of 2025 is larger than previous classes, it is still evident that available slots still fall short of the number of students who wish to enter a special school for science and technology. The demand is great, which is
Post a Comment
Please click to read the rest of this post >>>

Facebook's Aim Is to Make Money and Not Raising Your Child

Two years ago, there was a discussion on Intelligence Squared on whether Facebook is damaging society. Supporting this motion were Damian Collins, chair of the House of Commons Digital, Culture, Media and Sport Committee and Nina Schick, technology expert, and advisor to former NATO Secretary General Anders Fogh Rasmussen. Against this motion were Dex Torricke-Barton, former head of executive communications for Facebook, and Ed Vaizey, former Minister for Culture, Communications and Creative Industries (2010-2016). The discussion was chaired by Helen Lewis, staff writer on The Atlantic and former associate editor of the New Statesman. At the end of the discussion, the audience was asked to cast their votes and 60 percent agreed that Facebook is a menace to society. Above copied from Intelligence Squared Fast forward to present, our representatives on Capitol Hill are now asking the same question, but this time, there is an emphasis on how Facebook is affecting our children. In a Senate
Post a Comment
Please click to read the rest of this post >>>

National Merit Scholarship Semifinalists: Not Even One Student from Mason District Schools 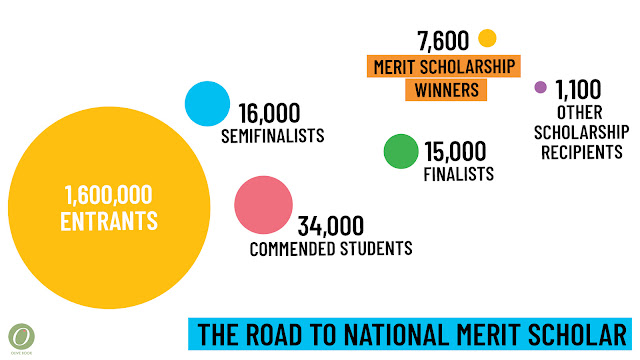 In a recent newsletter, Mason District School Board Member Ricardy Anderson commented on the news of 214 high school students in Fairfax County Public Schools (FCPS) being recognized as semifinalists for the National Merit Scholarship. Dr. Anderson wrote, "...I am concerned that none are from the comprehensive high schools in the Mason district. It’s imperative that staff identify the barriers that hinder performance and create a plan to promote more equitable representation from Falls Church, Justice and Annandale High Schools." Before questions regarding equity can be raised, it is useful to look at what is required to be recognized as a semifinalist in the National Merit Scholarship. The requirement is straightforward, to score in the top one percent on a test called PSAT. PSAT is a standardized test on reading, writing and language, and math. To become a semifinalist, one therefore has to be good at taking standardized tests. It is not a test for aptitude, intelligence or
Post a Comment
Please click to read the rest of this post >>>

Echoes from the Past

Roughly fifteen years ago, an event was held at the Wilson Center in Washington, DC . The event was a discussion on a gloomy outlook on the current state of the Philippines then. Philippines president Arroyo just survived "Hello, Garci" with her allies in Congress succeeding in stopping her impeachment. A commentator for the event, Hazel McPerson, a professor of political science at George Mason University, stated that one of the reasons the Philippines finds itself in a quandary was a weak public educational system. Basic education in the Philippines has failed miserably that most poor children would miss out on benefits of a good government. That failure in education is so evident that we do not even know our history well enough to understand who we are and what we need to do in the present for future generations. History has a lot to tell us about the Philippines today. Unfortunately, we often look at Philippine history in segments and therefore miss the overarching lesson
Post a Comment
Please click to read the rest of this post >>> 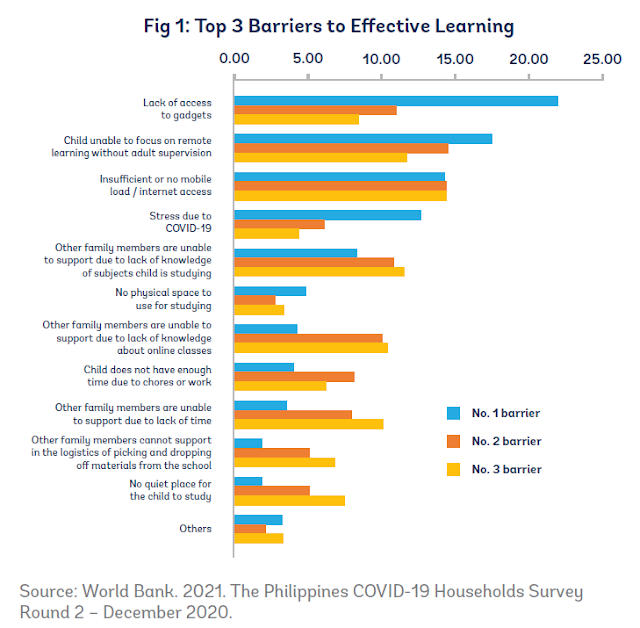 I still teach my class remotely. With a large class of more than a hundred students, it is very difficult to implement contact tracing in case a student in my class does test positive for the coronavirus. I do not like teaching remotely. I am not able to receive instant feedback by simply observing the expressions on my students' faces. The pandemic does bring some new challenges in both teaching and learning. The situation in the Philippines, however, is different. What the current pandemic has magnified are the same persistent problems basic education in the Philippines faces. With schools not having adequate restrooms or wash stations, it is not really easy to attend to the necessary hygiene measures. With crowded classrooms and high pupil to teacher ratios, it is not really possible to keep an eye on each student and maintain social distance. The lack of resources (school facilities and learning materials) exists even before the pandemic. And as important, children not finding
Post a Comment
Please click to read the rest of this post >>>

Schools Remain Closed in the Philippines 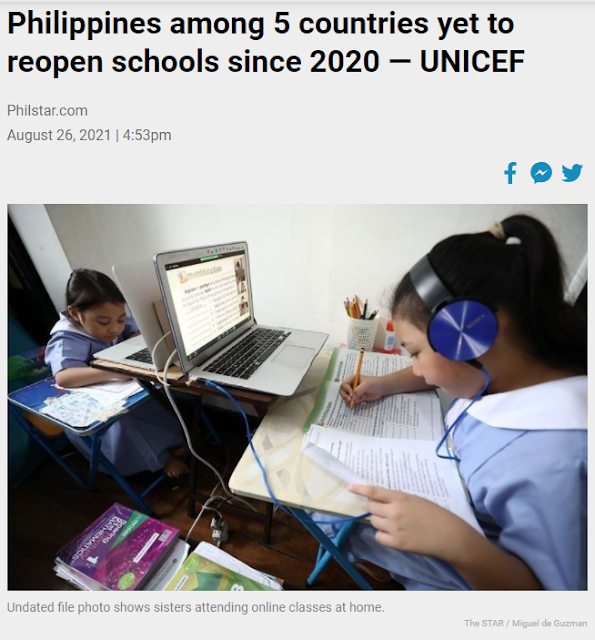 While most K-12 schools in the United States have reopened to in-person classes this school year, the United Nations Children's Fund (UNICEF) tells us that about 140 million children are still waiting for their first day to attend school. Among countries that have not reopened schools is the Philippines. The country is currently facing a surge in COVID cases and vaccination has only reached seventeen percent of the population. Above copied from PhilStar A teacher's group in the Philippines, Teachers' Dignity Coalition , recently criticized the plans of the Department of Education to hold webinars for teachers: Most schools were closed last year and we do have plenty of lessons to learn regarding what is important in both teaching and learning. In an article, " Adapting and Enduring: Lessons Learned from International School Educators During COVID-19 ", published in the Journal of Research in International Education, these lessons are summarized: Technology Access
Post a Comment
Please click to read the rest of this post >>>

Are We Ready for School? 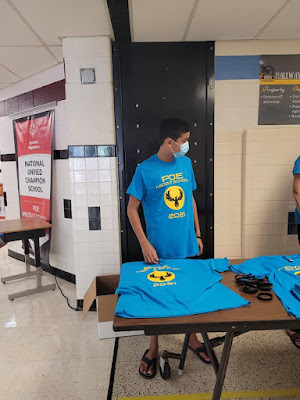 This school year is different from most years. Being ready for school is much more than just having the necessary school supplies and clothing. The COVID pandemic is still very much upon all of us. Without herd immunity, the spread of the coronavirus as schools reopen is highly likely. There are measures like requiring masks indoors but contingency plans are urgent as well. "What if?" is certainly an important question to consider. How we do things now tells a bit of how prepared we really are. Yesterday was the kickoff/open house at my son's high school and it happened with crowded corridors. My daughter's middle school also had an open house, but only for sixth grade students, thus, unlike in the high school, parents and students were not elbow to elbow. I am still scheduled to teach online at Georgetown University, as it is not possible to keep track of all students in a more than 100 person class in case contract tracing becomes necessary.  My son helping the Pare
Post a Comment
Please click to read the rest of this post >>>
More posts