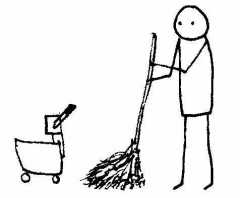 Among the various education-related news items that greeted the start of the new school year this week was one that did not seem to receive much attention: The Commission on Higher Education (CHED) has extended the moratorium first imposed last school year on new undergraduate and graduate programs in five “oversubscribed” courses – Business Administration, Nursing, Teacher Education, Hotel and Restaurant Management, and Information Technology. These courses were added to a ban on maritime courses imposed in 2009 because, according to CHED Director for the NCR Karen Castañeda, there is very little demand in the job market for graduates of these courses.
The moratorium was established by CHED Memorandum Order 32 of September 30, 2010, which explains the commission’s rationale in a little more detail:
Let’s rearrange these points into a more sensible order and see if we can follow the logic here, shall we? The most significant problem is that graduates of these programs are having difficulty finding jobs. The next assertion is that the “quality of graduates” of these programs is declining. The third point is that the increase in the number of these programs is the likely cause in the decline in graduate quality.
The position of the CHED is unfortunately typically illustrative of the lunacy which seems to guide government policy in the Aquino Era 2.0. If the intention is to control an oversupply of labor in these particular fields, then a moratorium on new programs achieves exactly nothing. Schools that already offer these programs can continue to do so, and evidently there is a great demand for them; according to the Manila Standard article, more than 800,000 students enrolled in business administration and related courses this year, with nearly 400,000 studying education, 425,000 studying IT-related courses, and a little over 350,000 enrolled in nursing and other medical courses. That’s nearly two million future graduates from existing programs; if the job market is already tight, all the moratorium does, if anything, is to not make the problem worse. Likewise, the decline in “graduate quality” is the fault of those existing programs, not new ones; any of those courses of study typically takes between three and five years to complete; a new program now is not going to reflect on “graduate quality” for at least a couple years.
The biggest disservice CHED’s moratorium does to the nation is in the elimination of choice through its narrow-minded, OFW-oriented perspective. Business administration, hotel and restaurant management, and information technology are not only very broad academic fields, but also disciplines that are likely to encourage entrepreneurship. By discouraging students from taking these courses – or worse, forcing them into programs which are evidently already underperforming – CHED is working against the very problem of the lack of economic development and job creation that concerns them so much. By preventing existing schools from expanding their programs and preventing new schools from opening, CHED is also working against the problem of program quality they are trying to solve by tossing an ill-considered and poorly-written Memorandum Order at it. Without potential competition, the existing programs have no incentive to improve – nor, it could be said, quite as many resources with which to improve, since CHED would like to limit the number of Education graduates.
Not every college graduate will have the opportunity or the desire to mop floors in Hong Kong or wait tables in Dubai, and the number of jobs in the call center industry is inevitably finite. Before they come up with any more bright ideas, maybe the PhD.’s at CHED ought to equip their offices with a couple calendars – that might help to better remind them that there is such a thing as tomorrow.
Higher Education