June 14, 2012
The Quacquarelli Symmonds (QS) ranking of Asian universities for 2012 is now available.  Five schools in the Philippines made it to the list of the top 300.  In 2011, UP ranked 62nd; ADMU, 65th; UST, 104th; and DLSU, 107th.  This year, University of the Philippines is 68th, Ateneo de Manila University  ranks 86th, De LaSalle University, 142nd, University of Santo Tomas, 148th.  All four schools have dropped in this year's ranking. The University of Southeastern Philippines in Davao City made the list for the first time.


This year marks the second phase of the implementation of the new K to 12 curriculum by the Department of Education in the Philippines. The new curriculum aims to address the problems of Philippine basic education. Although the additional two years at the end of high school are not yet in place in all schools, significant parts of the current 10-year education program have been changed this year.

Still, DepEd is determined to push its K to 12 program. The problems remain as the government insists on pushing a reform while neglecting two very important ingredients: (1) seriousness as seen in funding and (2) listening to the voice of the people.

One additional year, kindergarten, has already been formally added to the basic education program of the country. One can evaluate the sincerity and the determination of the Philippine government in this area in "The State of Kindergarten", http://philbasiceducation.blogspot.com/2012/06/state-of-kindergarten.html. Volunteer teachers are paid 3000 pesos a month and in most cases, this payment is even delayed. 100000 kindergarten teachers paid at a much more respectable rate of 15000 pesos a month will cost the government 18 billion pesos a year. Since kindergarten represents at the moment a tenth of the country's basic education program, 18 billion pesos for kindergarten teachers will represent a serious and thoughtful implementation of DepEd's K to 12 program. Unfortunately, DepEd's K to 12 does not have the funding that is required for the program to be implemented in at least a satisfactory manner. Kindergarten is the first year of DepEd's K to 12, yet, it does not receive the tools it requires to succeed.

The other new elements that came with the K to 12 program this school year are likewise detrimental to the education system because of poor implementation. These changes are occurring within the curriculum of the current ten-year program. At the root of this misstep is the lack of teacher representation and participation in drawing these reforms. These changes were not initiated from the ground. Instead, these were designed from the top and most lack careful and published studies. For example, with regard to the mother tongue - multilingual education component;

"Luistro admitted that DepEd did not have any research data to back its position and that he was not prepared to declare that an early-exit scheme was superior to a long-exit program. He then said that he was open to the idea of expanding L1 instruction throughout the basic education cycle and of deleting any wording in the bill that would peg L1 instruction to an early exit program."  ("K to 12: More than just decongesting the curriculum", Ricardo Ma. Duran Nolasco, http://opinion.inquirer.net/30287/k-to-12-more-than-just-decongesting-the-curriculum)


The spiral approach to both mathematics and the sciences is likewise criticized by the groups of teachers (Manila Public School Teachers Association, MPSTA, and the Alliance of Concerned Teachers, ACT):

"Valbuena (MPSTA president and ACT vice president) could not agree more, saying that Spiral Approach – which is one of the main highlights of the new curriculum – is "impossible" for teachers. The basic premise of the Spiral Approach is that students will learn two or more concepts all at once and within the same lesson. "This is impossible for teachers because we cannot be very flexible since most of us have majored in a specific study. For instance, it will be very difficult for a Math teacher to incorporate Science or Biology concepts in one lesson," he added."  (http://www.mb.com.ph/articles/361446/deped-confusion-or-not-k-to-12-stays)

All these changes will only worsen basic education in the Philippines.

At the beginning of this post, the drop in the ranking of universities in the Philippines was shown. Mentioned recently in the Santa Catalina Global Newsletter is even more disconcerting:

"...Another identified problem is the low rate of program accreditation among programs of colleges and universities. Although accreditation is voluntary, less than 20 percent of the Higher Education Institutions have accredited programs...."

Problems in basic education can not be addressed properly if the problems in higher education are not addressed first. "Without higher education basic education cannot progress...." - Bikas C. Sanyal explains this in the Role of Higher Education. Basic Education reform can not succeed without teachers. Teachers are produced by Higher Education Institutions. This is the place where reforms must begin. Teachers can not teach without just compensation. Before any curricular reform, this likewise must be addressed first. 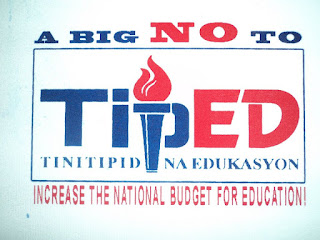