Showing posts from September, 2018
Show all

Should We Worry About Our Children's Screen Time? 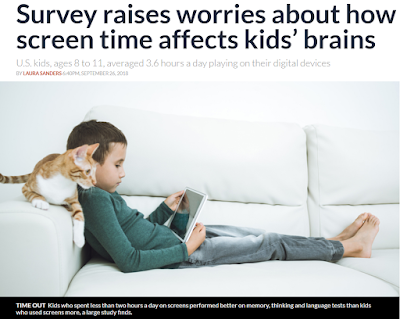 Earlier this month, this blog talked about the increased use of social media by teenagers in the United States over the past six years. A recent news article in Science adds to this concern. Citing a study published in the journal T he Lancet: Child & Adolescent Health , ScienceNews reports that children 8-11 years old in the United States are now on average in front of a smart screen for 3.6 hours a day. Above copied from ScienceNews It is indeed a matter of concern if a large chunk of a child's waking hours are now spent in front of a screen. The study also shows that only 1 in 3 children aged 8-11 years uses the screen for less than two hours. Clearly, some other childhood activity is losing time. The report also looks at physical activity and only about 1 in 5 children in this age group perform the recommended 60 minute physical activity per day. On the sleep recommendation, at least half of the children are still able to sleep 9 to 11 hours per day. Homework has a
Post a Comment
Please click to read the rest of this post >>> 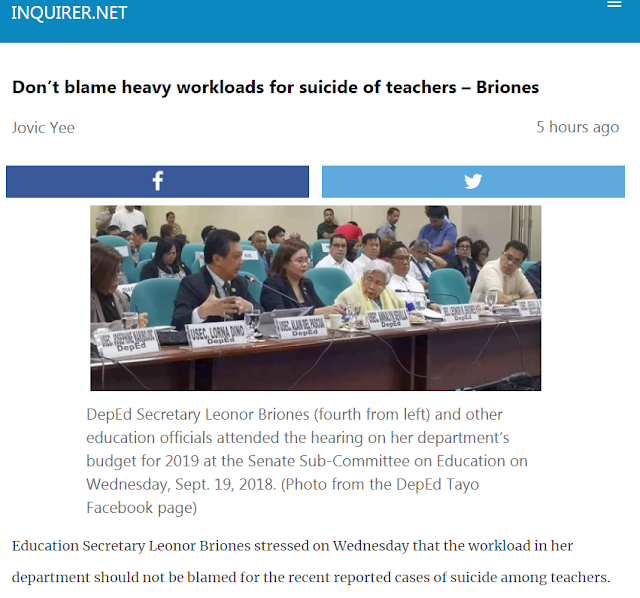 A headline of a recent news article on the Philippine Daily   Inquirer  caught my attention this morning. The secretary of education, Briones, was reported to had drawn attention to the "unprofessional" correlation made by certain individuals or groups that connect heavy workloads to suicide incidents among teachers. It is true that the specific driving force behind a suicide is complex. It is often a combination of impulsiveness and a variety of external factors and circumstances. However, there is no uncertainty regarding the relationship between heavy workloads and stress. More importantly, heavy workloads are obviously not good for an effective basic education. A heavy workload, regardless of whether it is the primary cause of suicide or not, should be addressed for the well being of teachers and their students. Above copied from the Inquirer Therefore, it is not proper for the Department of Education to brush aside concerns regarding heavy workload simply because
Post a Comment
Please click to read the rest of this post >>> 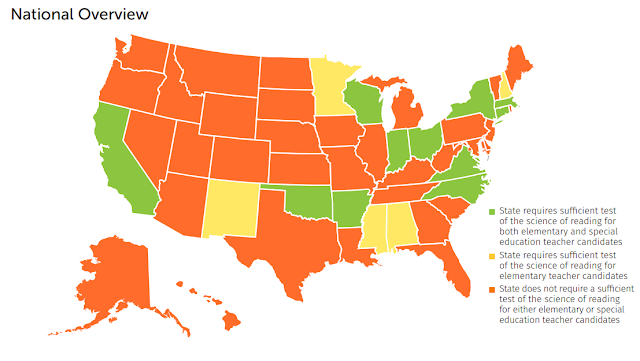 The American Academy of Special Education Professionals lists ten roles and responsibilities of a special education teacher.  Most of these roles especially those that pertain to a classroom no doubt require something in addition to what we expect from a general education teacher. It follows then that a special education teacher not only knows content and pedagogy that apply to all students in general but also specific strategies or toolkits that help address challenges and strengths special students have. Foremost, a special education teacher must be aware of the Golem effect, where lower expectations simply lead to poor performance. Special students after all do not simply have challenges. They also have strengths. With the additional responsibilities, it does seem that special educators should be the cream of the crop among teachers. What is disconcerting at the moment, as reported by the National Council on Teacher Quality , is that some states in the United States of America act
1 comment
Please click to read the rest of this post >>>

Should We Encourage Young Children to Use Their Fingers When Doing Math? 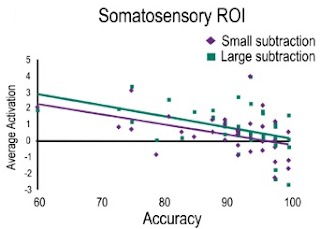 I was recently reminded of an article written by Boaler and Chen a couple of years ago on why math teachers should encourage their young students to use their fingers while I was browsing through Facebook.  These authors were apparently drawing their conclusion from a study published in the journal Frontiers in Psychology    by Berteletti and Booth. Unfortunately, this article is an excellent example of how the public can be misinformed by not reading properly the research article. In fact, one sentence in the summary of the research article should have forced Boaler and Chen to be more thoughtful before they write scientific findings for public consumption. Here is the sentence: "Interestingly, better performance in subtraction problems was associated with lower activation in the finger somatosensory area." And here is the graph: Above copied from Frontiers in Psychology What is shown above is how much a certain region in the brain is activated, specifically the s
Post a Comment
Please click to read the rest of this post >>> 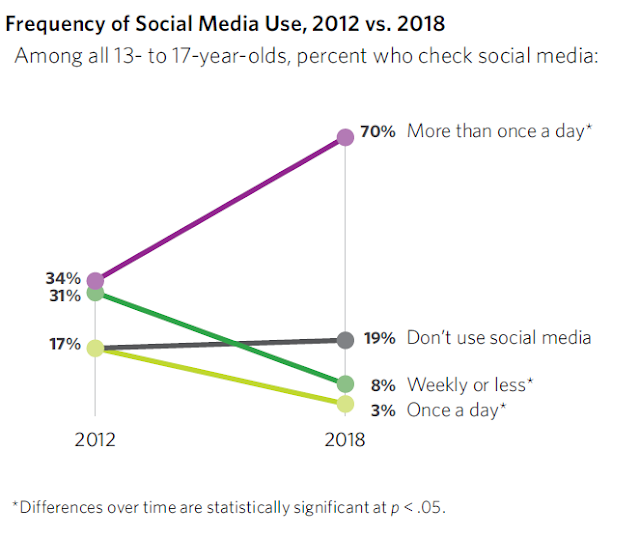 A new report is available from Common Sense Media . The report is on social media use of teenagers based on a nationally representative survey of more than 1000 13- to 17-year olds in the United States. The major findings of the survey are: an increased usage of social media by teenagers compared to the survey made six years ago, a generally positive experience is reported by teenagers who use social media, and a continuing concern regarding a lack of self-regulation in using social media devices. Social media keep us connected. And in general, there is no doubt that this additional means of communication is beneficial. The report shows first of all that daily usage has increased over the past few years although the percentage of users has decreased a bit. Teenagers are checking social media much more frequently. Above copied from Common Sense Media Another finding is that social media seems to make teenagers less depressed. This is only expected from any additional means of c
Post a Comment
Please click to read the rest of this post >>>

Excellence and Equity Can Go Hand in Hand 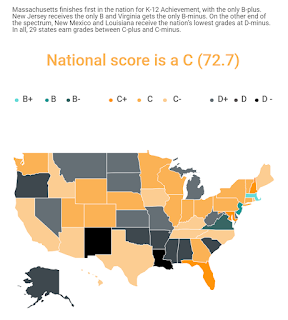 Back in 2009, Tom Loveless  of the conservative Fordham Institute warned against the detracking of schools in Massachusetts. He suggested that tracking (grouping students according to abilities) leads to higher achievement since advanced students are given wider opportunities and greater challenges. Loveless, in his article, was specifically referring to the public schools in the state of Massachusetts, where detracking has become widespread in middle schools. Fast forward, ten years later, the state of Massachusetts has received the honor of being number one in the nation in terms of K-12 achievement, scoring high on all criteria: current performance, improvement throughout the past 15 years, and in addressing the poverty achievement gap. Excellence and equity can indeed be realized at the same time. Above copied from  EdWeek Massachusetts in the only state in the United States that scored a grade of B+. New Jersey gets a B and Virginia gets a B-. These are the only states t
Post a Comment
Please click to read the rest of this post >>> 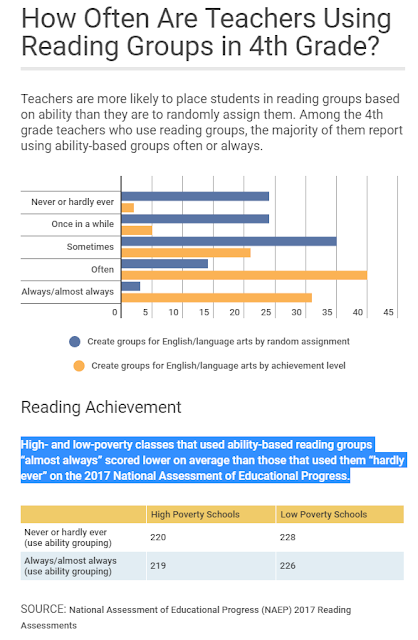 Meritocracy is often used in education for some perceived efficiency. Sadly, part of that efficiency entails a selection process that provides society with laborers of differentiated skills. Not everyone can be a CEO. The Philippines' K to 12 has a tracking program in senior high school and during my basic education years, students are divided into sections based on their past performance. Obviously, there is a question of efficiency versus equity. If schools only focus on how much their students actually learn, there is no question that equity beats efficiency. As standardized exams show, "High- and low-poverty classes that used ability-based reading groups “almost always” scored lower on average than those that used them “hardly ever” on the 2017 National Assessment of Educational Progress." Above copied from EdWeek The problem with selection or "tracking" in schools is this. We are biased whether we admit it or not. A recent experiment involving psych
Post a Comment
Please click to read the rest of this post >>>
More posts