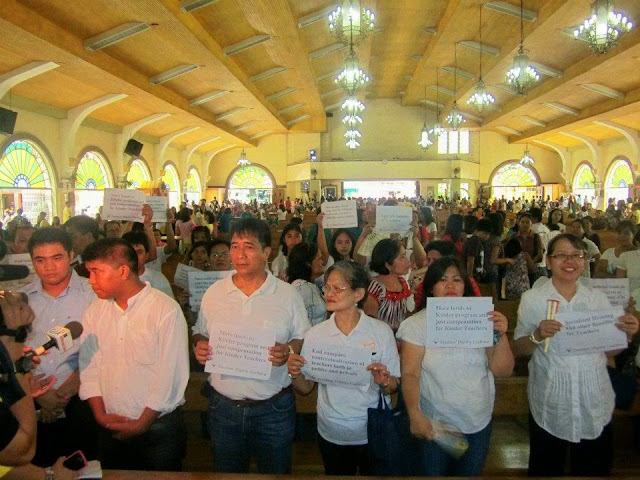 Using K-12 program's grading system as standard, the Teachers’ Dignity Coalition (TDC) gives the government a "B" for its performance showed during the first week of the school year, which is also the pilot year of the K-12 program. Based on the grading system for K-12 which is contained in DepEd Order No. 31, s. 2012, "B" stands for "Beginning" which has a numeric equivalent of 74% and below. Other marks are D for Developing; AP for Approaching Proficiency; P for Proficient; and A forAdvanced. The TDC based its rating on the problems surfaced during the first week of classes which include the shortages in teachers, seats, classrooms, toilets and other facilities. The group also pointed out that instructional materials for K-12 curriculum which will be in taught in Grade 1 and Grade 7 (first year junior high school) are not readily available. And the worst, according to TDC is the government’s disregard to the welfare of teachers when the it hired the kinder teachers in contractual terms and will be paid P3000 monthly for the special job. The group again asked Malacañang to consider postponement of the program and call for a wider dialogue, information dissemination or even national debate. The group instead, challenged President Aquino to put necessary funds to resolve the shortages in school inputs, most of them are actually backlogs of the past administrations.

The school opening last June 4 was greeted by the same problems experienced during the previous school years. It was disastrous as usual. The students were once again greeted by lack of chairs, books, classrooms and most specially teachers. The government’s answer to this perennial problems of shortages and poor quality of the education in the Philippines is the K to 12 program. The said curriculum is the flagship program of President Benigno “Noynoy” S. Aquino III aside from the dole-out Conditional Cash Transfer (CCT) program.

In news reports, Education Sec. Armin Luistro was quoted as saying that the Department of Education (DepEd) was ready for school year 2012-2013. “We’re ready. In fact, all students who will come to school on the first day of classes will have a seat and textbook ready for them.”

At the Corazon Aquino Elementary School in Batasan, Quezon City, the books just arrived on June 4. According to Paulino Medrano, school principal, they have yet to distribute the books to the students.

The figures of shortages are glaring; the public schools across the country still needs an additional 50,921 classrooms, 74,178 teachers, 123,196 toilets, 62.4 million textbooks and about 1.3 million classroom chairs – a gap that the DepEd targets to fill up until 2016. In the meantime, a lot of parents complained that their children were suddenly transferred to the home school program, without any prior notice, to decongest public schools and give an image that all is well and that shortages are a thing of the past. In reality, the implementation of the K to 12 program, without any budgetary support, made the shortages only worse.

"K to 12’s grading system alone is more than enough for lawmakers and parents to oppose its implementation.

Forget about the additional cost of two more years in senior high school.

Forget about the lack of classrooms, teachers and books and classes under the shade of mango trees.

Think of smart alecks bragging to their parents, “Pa, Ma, I got a grade of “B” in all subjects. That’s because I’m the best!”"
By Eddie O. Barrita