Showing posts from 2012
Show all

A Letter to a Teacher 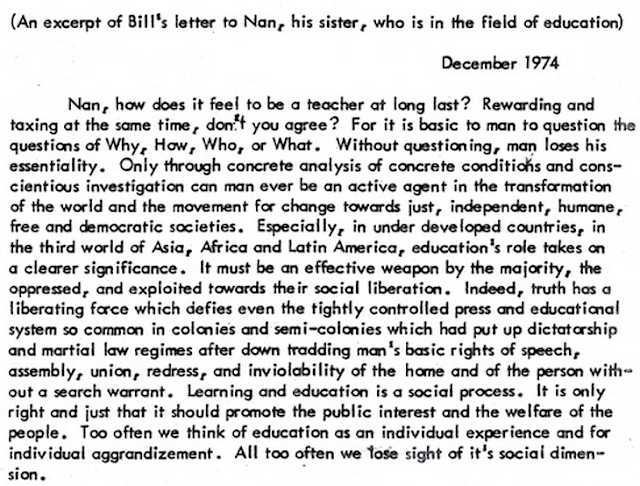 The year 2012 is now at its end. At this time, I would like to share an excerpt of a letter that I read recently. The letter was written by William Begg  and posted in the " Bantayog ng mga Bayani " site. And as the year ends, here are some photos from Tudla Productions , reminding us that there are children who have lost their homes and schools because of typhoon Pablo. 2013 is another opportunity to right what is wrong....
Post a Comment
Please click to read the rest of this post >>>

Right Time and a Right Place 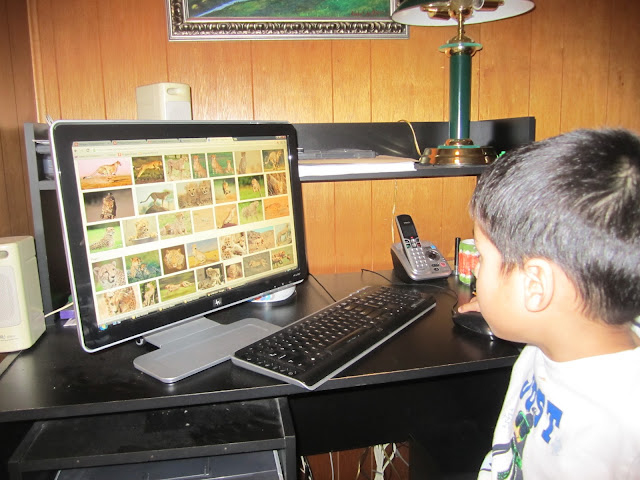 "There is a right time and a right place" is perhaps better known as a collection of words that talks about luck or serendipity. But in a curriculum for basic education, it speaks of appropriateness. An earlier post in this blog, " A Question of Heroes: A Question of Education Reforms ", talked about resolutions for the coming new year which included avoiding some phrases when describing education reform. One of those phrases was "high standards". No education reform out there would claim anything other than "higher standards". It is within this context that the phrase "Right Time and a Right Place" maybe helpful. A good curriculum in basic education wisely chooses the skills and content to be taught that are appropriate for the background and age of school children. I recently came across an article, " A Day at an Elementary School with a Cognitive Psychologist " by Cedar Riener, assistant professor of Psychology at Randolp
Post a Comment
Please click to read the rest of this post >>> 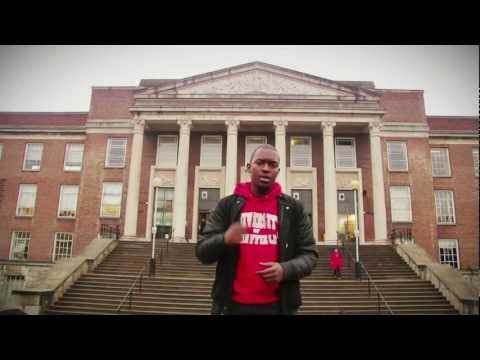 Suli Breaks recently came out with a video, " " Why I Hate School But Love Education ". At this time, the video has been viewed almost 2,000,000 times and it has drawn more than 30,000 likes and less than 2000 likes. That is a whopping 94% favorability rating.  The video raises questions and answers these with "data". Emmeline Zhao, associate education editor at the Huffington Post wrote a commentary on this video entitled, "' Why I Hate School But Love Education' Viral Video Points To Stupid In America And All The Wrong Questions ". She wrote: Suli Breaks has a point -- school might not be for everyone, but an education is crucial, and students should assess whether they're really in school to learn. But the arguments he uses to make it have their flaws -- evocative of  this crisis of "stupid in America"  ( a phrase borrowed from a 2006 ABC investigation ) that in the end, is only perpetuated by a whirlpool of communiti
2 comments
Please click to read the rest of this post >>> 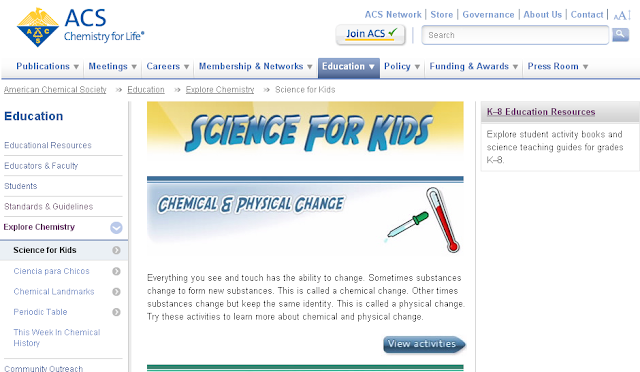 The American Chemical Society provides web resources designed specifically for elementary and high school students. It is called "Science for Kids". Screen capture of ACS Science for Kids site The site contains activities, articles, puzzles and games that are appropriate for young children. Worth noting is its series of articles describing real chemists. An important part of science education of young children is to introduce them to real scientists, to give them the correct impression and image of scientists. The following is an example (This is taken from the page describing chemist Pamela Helms of the Caldrea Company, Minneapolis, MN): To see more, visit the American Chemical Society's "Science for Kids" site .
Post a Comment
Please click to read the rest of this post >>>

My grandmother used to tell a story about "tibi-tibi". I am not sure how that word is correctly spelled. As far as I understand, "tibi" refers to hard dry stool often associated with constipation. In Paete, Laguna, where sewage mixes with storm drains, "tibi-tibi" is a character that floats with the flow, meeting others in the story as it finds its final destination. I think my grandmother got tired telling the story before I got tired hearing it. Oral tradition was the only way to tell stories then. There were no books, no pictures. I was not required to read, but I simply had to imagine inside my head the scenes and characters portrayed in the story.  During my early years in school and this continued up till college, I found comfort in mathematics. Especially in first grade, all I had to know are the numbers and the plus, minus and equals signs. Algebra was a shock because I had to read problems to construct the equation. I could solve for x  given t
Post a Comment
Please click to read the rest of this post >>> 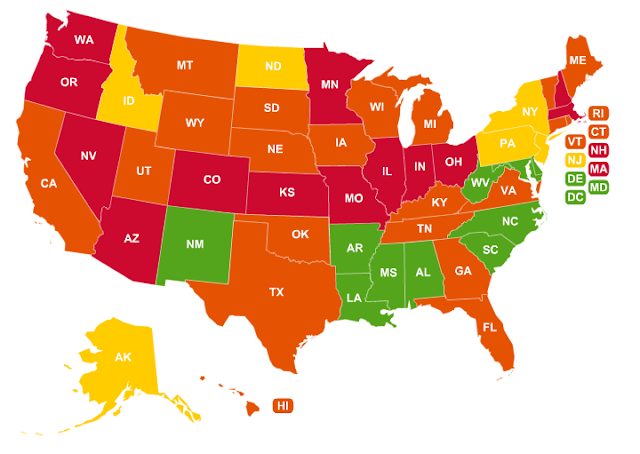 During this holiday season, I am taking the opportunity to look in the mirror. “The main driver of steady progress of our school system since the 1970s has been consistent emphasis on enhancing equity, not academic excellence, in our school system.” -Pasi Sahlberg, education reformer, Finland The Children's Defense Fund  (CDF) has the following data in the United States that demand our attention. First, the state of kindergarten: FULL-DAY KINDERGARTEN IN THE STATES by the Chidren's Defense Fund http://www.childrensdefense.org/child-research-data-publications/data/state-data-repository/full-day-k/full-day-kindergarten-states-2012.html Release Date: January 31, 2012  CDF has taken a snap shot of the status of kindergarten in America in order to focus the national, state and local dialogue on the missing half-step of our public school K-12 system. A thorough review of the literature was done followed by research correspondence and calls with state dep
Post a Comment
Please click to read the rest of this post >>> 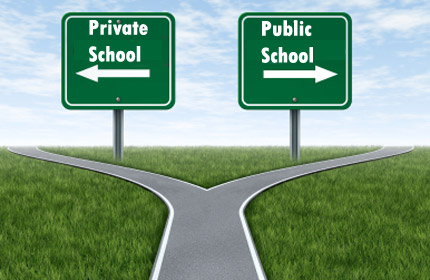 "Here in America," Sahlberg said at the Teachers College, "parents can choose to take their kids to private schools. It's the same idea of a marketplace that applies to, say, shops. Schools are a shop and parents can buy what ever they want. In Finland parents can also choose. But the options are all the same."  Herein lay the real shocker. As Sahlberg continued, his core message emerged, whether or not anyone in his American audience heard it. Decades ago, when the Finnish school system was badly in need of reform, the goal of the program that Finland instituted, resulting in so much success today, was never excellence. It was equity. -"What Americans Keep Ignoring About Finland's School Success"   The Atlantic , December 2011 Downloaded from " Private vs. Public Schools " Both education and health care costs are skyrocketing in the United States. Costs escalate with people so willing to pay whatever it takes to get higher
1 comment
Please click to read the rest of this post >>>

Teachers' Bonus Released on Time, But Cut in Half

December 24, 2012
by Teachers' Dignity, December 24, 2012 The productivity Enhancement Incentive (PEI) of public school teachers and government employees was released on-time according to the Teachers’ Dignity Coalition (TDC). However, the group’s monitoring this weekend revealed that several schools in some areas like Quezon City in NCR and Sultan Kudarat, Cotabato and ARMM provinces in Mindanao failed to receive the one-time across-the-board incentive of P5, 000.00 last Friday, the last working day before the long weekend. The reason for this, according to the group is likely technicalities on the procedure in the field. But it does not mean that the DBM or DepEd failed to release the amount. The TDC reiterated their appeal to DBM and Malacanang to defer the implementation of the Performance-Based Bonus (PBB). Under the PBB scheme, teachers and government employees will again receive another amount ranging from P5, 000. 00 to P35, 000.00 depending on the performance rating/ranking of t
Post a Comment
Please click to read the rest of this post >>>

"Christmas Love at the Book Bridge" 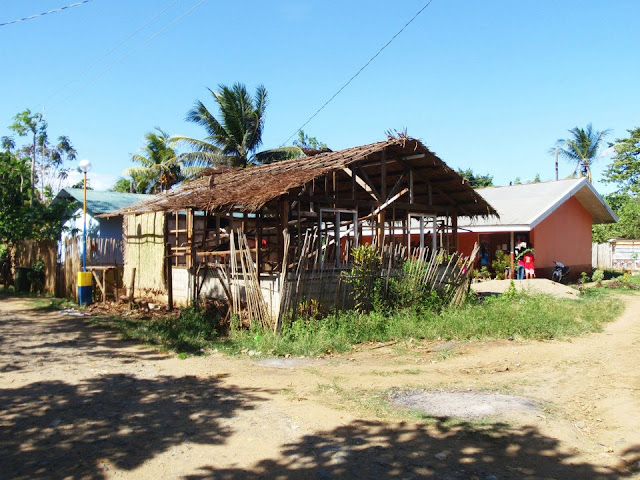 When I was a child, our family had a small artificial Christmas tree. It was about two feet tall. But I was always mesmerized by a nativity scene that my mother placed underneath the tree. In a way, it was nice that the tree was small, the manger looked bigger. In your palace wall mighty king Do you know what I know A child, a child Shivers in the cold Let us bring him silver and gold Let us bring him silver and gold The scene had the three wise men (or three kings) bearing gifts to a child born inside a stable. And I have always wondered why with all our wisdom, we bring a shivering child silver and gold. The spirit of Christmas as my parents had taught me is opening one's house and one's heart to the needs of others. I am taking this opportunity to share with readers of this blog an inspiring story from the island of Palawan in the Philippines. The story is shown here with photos and captions kindly shared by  Cynthia Sumagaysay- DelRosario and Sharon S. Salazar . It is
Post a Comment
Please click to read the rest of this post >>>
More posts