Two Sides of a Disaster: Preparation and Response

November 11, 2013
To err is human but is to blame likewise? Surely, there are circumstances beyond our control. There are limits to how much we could prepare. When disaster strikes, it is true that there are lessons to be learned. Time, however, does not pause. There are needs that need to be met immediately. Otherwise, disaster becomes even more catastrophic. We expect our government to help us prepare for a calamity. But we should expect more in terms of how a government responds when suffering is already present. In CNN's "Our Year of Living Dangerously" Mong Palatino writes:

"This latest tragedy should be a reminder that while disasters will strike no matter what we do, cleaner, more efficient governance can sometimes help stop disaster turning into catastrophe."

One simply has to look at some of the posts made in social media to appreciate what Palatino is saying: 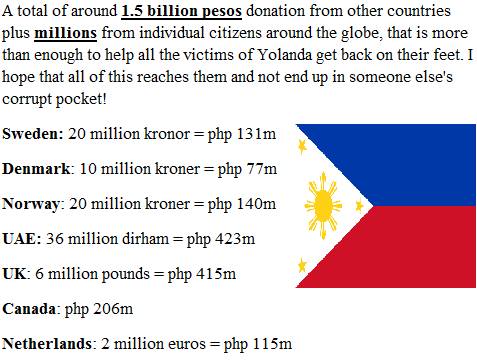 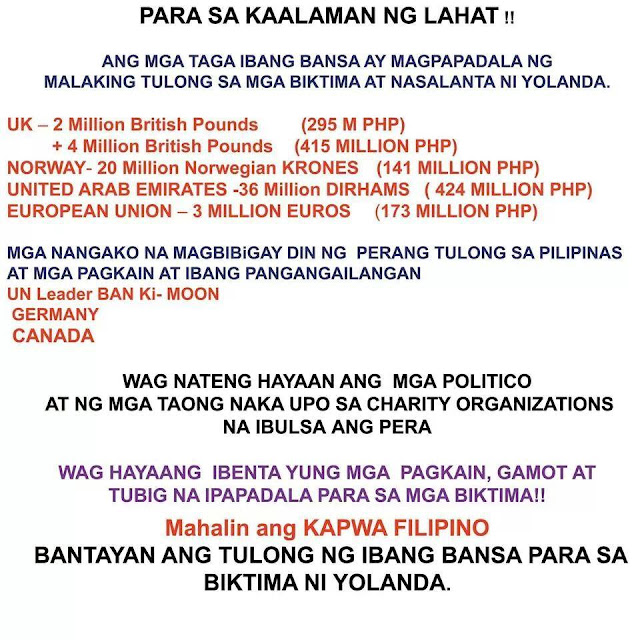 The following is another response from climate change deniers: 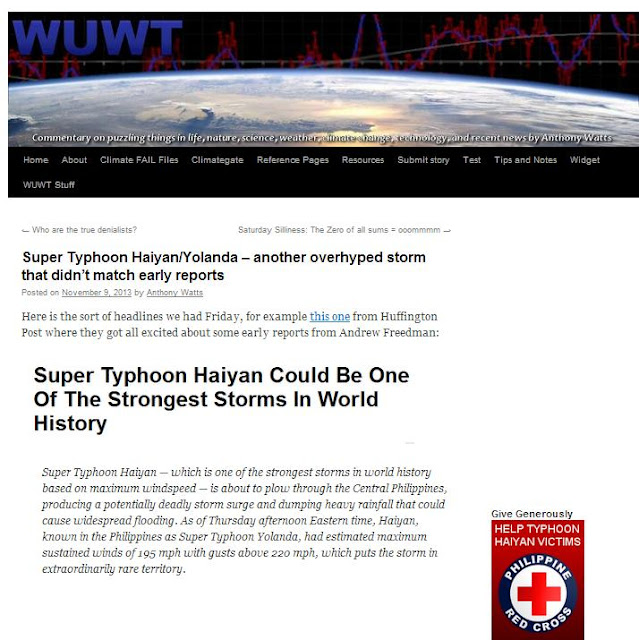 At least, it had an ad from the Philippine Red Cross.

PLEASE READ AND SHARE! I AM SHARING THIS TO RAPPLER AND OTHER NEWS AGENCIES FOR THEM TO KNOW WHAT IS REALLY GOING ON IN LEYTE RIGHT NOW.

Finally heard from a friend who left for Tacloban Saturday morning (through the help of her family's friends in the military) to look for her family members in the towns of Palo and Tanauan whom she hasn't heard from since Thursday night prior to supertyphoon Yolanda's landfall. Below are her exact messages to me.


And here are two statements, the first one from Obama, the second from Aquino:


The White House
Office of the Press Secretary
For Immediate Release

Statement by the President on Super Typhoon Haiyan/Yolanda

Michelle and I are deeply saddened by the loss of life and extensive damage done by Super Typhoon Yolanda. But I know the incredible resiliency of the Philippine people, and I am confident that the spirit of Bayanihan will see you through this tragedy. The United States is already providing significant humanitarian assistance, and we stand ready to further assist the Government's relief and recovery efforts. Our thoughts and prayers go out to the millions of people affected by this devastating storm.
Aquino:

Statement
of
His Excellency Benigno S. Aquino III
President of the Philippines
On typhoon Yolanda
[This is an English translation of the speech delivered on November 11, 2013]
Last Friday, Typhoon Yolanda ravaged a large part of the Visayas region. It was one of the strongest typhoons in this country’s history, if not the world’s. We thank the experts from PAGASA, the Mines and Geosciences Bureau, Phivolcs, and DOST, who gathered together and gave us the right, detailed, information, which allowed our countrymen to prepare for the coming storm. This was also the reason for the reports of low casualty counts from the other provinces that were also in the typhoon’s path, such as Oriental and Occidental Mindoro, Negros Occidental, Palawan, Aklan, and Romblon, where their local governments were able to prepare in advance.
In spite of all this, we all witnessed the vast destruction that this typhoon wrought in Leyte and Samar. It was there where Typhoon Yolanda’s storm surges were seemingly funneled to the land, and where we saw the heaviest damage; and it is there were we are focusing aid and assistance.
We are also asking for the understanding of all. As Yolanda battered the country, electricity and communications were lost in many areas. This affected not only the communications of those who want to ensure that their families are safe, but also the coordination of our relief efforts. For us to give the aid that is required, we need to know what is needed in each area; and we had difficulty obtaining this data. There were also a number of local governments that, because of the extent of the destruction, were paralyzed, because among those who fell victim to the storm were their own personnel and officials. Just think: we returned to a situation where information had to be spread through word-of-mouth—no TVs, cellphones, or internet; stores and establishments were closed; it was difficult to organize relief efforts. This was the root cause of the chaos that erupted in some areas.
This is where the national government comes in. Instead of just cooperating and adding our efforts to that of communities, the national government must lead. The DPWH cleared roads blocked by the collapse of massive trees; all reported obstructions of roads have likewise been opened. In fulfillment of the requests of local officials, we sent 800 soldiers and policemen to Tacloban to restore peace and order. We have three repacking centers producing 55,000 family food packs every day; and I have already instructed Secretary Abaya of the DOTC to take charge of efforts to deliver relief goods where they are most needed.
The delivery of food, water, and medicines to the most heavily affected areas is at the head of our priorities. We have tasked barangays to deliver and distribute these vital needs; 24,000 family food packs were already distributed in Tacloban yesterday; and these efforts are centralized in the eight largest barangays there. We already have two water purification facilities, and many more are arriving, to ensure that our countrymen have safe drinking water. We are fixing the mechanisms to widen the scope of our government’s social housing program. And from our calamity funds, contingency funds, and savings, we have 18.7 billion pesos that can be used to rehabilitate areas that were devastated by this typhoon.
Aid is also arriving from other countries; 22 countries have pledged their assistance, including Indonesia, America, England, Japan, Singapore, New Zealand, and Hungary. The private sector is also finding different ways to help our countrymen recover, such as restoring telecommunications and the supply of oil to affected areas.
At the same time, we are declaring a State of National Calamity to accelerate the efforts of government to save, to render aid, and to rehabilitate the provinces that were ravaged by Yolanda. This is important so that we can ensure control over the prices of the basic commodities and services that our countrymen will need—to avoid overpricing and hoarding of vital products. We have also approved an additional 1.1 billion pesos for the Quick Response Fund of the DSWD and the DPWH, so that they can more quickly provide the necessary support for the recovery of our countrymen who were the victims of this typhoon.
Although we recorded a low casualty count in many of the provinces through which Yolanda passed, in the areas that were seemingly swallowed up by storm surges, it cannot be denied that we witnessed massive destruction and loss of life. Like you, I also want to know what we can do to prevent similar situations in these areas in the future.
In the coming days, be assured: help will reach you faster and faster. My appeal to you all is: remaining calm, praying, cooperating with, and assisting one another are the things that will help us to rise from this calamity.
Thank you.