Responding to a Hurricane Disaster

November 13, 2013
While it seems extremely difficult to address problems in basic education both in the Philippines and in the United States, responding both before and after a hurricane is much more daunting because of its immediate nature. Time is extremely important. Logistics plays a much more decisive role. When an inability to prioritize and devise effective solutions is so clearly evident for problems that have been lingering for years if not decades, such as high school dropout rates and poor quality primary education, it is only to be expected that appropriate and effective measures in mitigating the effects of a natural disaster will be likewise immensely lacking.

In 2011, hurricane Irene was threatening the North Carolina east coast. Irene was a Category 1 hurricane when it made landfall, more than a hundred times weaker than the super typhoon that just went through Central Philippines. We were on the outer banks at that time and were told to evacuate immediately. There was heavy traffic on our way out to the mainland. All across the eastern states of the US there are designated hurricane evacuation routes. During evacuations, these roads become one-way, either northbound or westbound. Vehicles are not allowed to go east or south. These hurricane evacuation routes stretch more than a hundred miles away from the coastline: 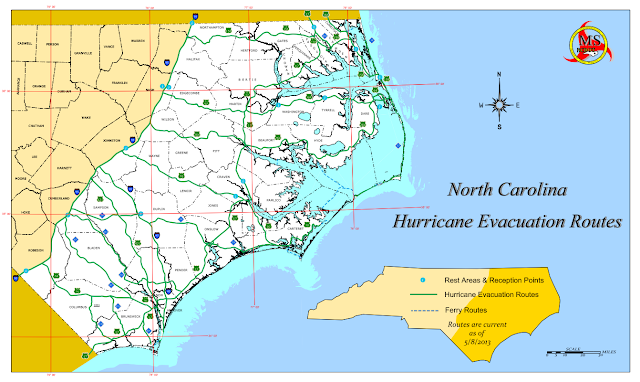 For the Central Philippines, it is really difficult to imagine placing a similar system like this. The island of Leyte, example, is about 50-100 miles wide from east to west. There is really no place to go to escape a super typhoon packing category 5 winds within a radius that is of the same size as the island. Structures that can withstand the enormous force of a super typhoon can be built. These structures, however, could only protect the people during the height of the storm. Food, clothing and water are needed after the typhoon. With roads destroyed, one would then face the same problem of logistics, how to reach the survivors.

Hurricane Katrina provided important lessons on what needs to be done after a disaster. "All the best laid plans…conditions impeding proper emergency response", published in the International Journal of Production Economics, lays out some of the problems learned from Katrina as well as the 2004 earthquake near Indonesia:
This study also notes that over abundance of relief donations can be counter productive. Proliferation hinders the quality of the response. Secondly, local actors can be completely marginalized. Pressure from media coverage has also been pointed out as responsible for forcing relief agencies to spend as much as they can, as fast as they can, without properly studying the immediate and long term needs of the affected communities.

At the moment, the world has been extremely quick and generous in responding to the recent natural disaster in the Philippines. Sadly, the bigger problem is not really about supply, but more on how to bring the aid to those who are in need. Fortunately, some countries including the United States are now sending ships and aircraft to assist the Philippines in distributing the supplies to survivors of Hurricane Yolanda. US marines stationed in Japan have arrived at Tacloban city. The US forces have helped clear the airport and are now providing the much needed floodlights and radar to keep the airport operational even at dark. So far media reports have been concentrated on one city in the island of Leyte. There are other areas in Eastern Visayas that have been adversely affected by the super typhoon. Capiz, Aklan and Samar were also along the path of destruction of Yolanda. The immediate needs are indeed vast. Long term recovery, however, requires so much more. The needs of these communities unfortunately will likely last longer than the coverage of main stream media. The hope is that those who could help recognizes the need for a sustained aid and attention to these affected communities not just in the coming months but for years to come. It would take quite a while for example, for Tacloban, a city that has been totally devastated to stand on its own.

The above simply highlights the difficulty of having aid reach the victims....