A Lesson We All Need to Read and Learn

November 17, 2013
Almost a year ago, a category 5 typhoon packing sustained winds at 175 mph hit the southern island of the Philippines. The typhoon internationally known as Bopha was locally called "Pablo". While the devastation from the recent super typhoon Yolanda was attributed to storm surge, Pablo destroyed homes in Mindanao with rainfall that triggered landslides. Unlike Yolanda, Pablo did not receive ample media coverage. Patrick Fuller of CNN in "Two months on, Typhoon Bopha's victims still homeless" wrote:

...Bopha didn't get much traction in the international media. Competing against Syria for the headlines, the story appeared to drop off TV screens within days.

With scant media coverage, the job of NGO fundraisers was made even more difficult. Barely any British NGOs launched public appeals in the full knowledge that levels of public sympathy just weren't high enough. But if a category 5 super typhoon -- the largest on the scale -- does not warrant donor attention the future looks very bleak.
Bamforth takes a hard line on the indifference shown by the international community to the disaster.

"The paradox is that while donors view the Philippines as more developed and less deserving, when a disaster like Bopha strikes, those development gains become very fragile as people's levels of vulnerability increase so dramatically," he said.

Mindanao is one of the poorest regions of the country. Development has lagged behind other parts of the country, hindered in part by various long running insurgencies spanning four decades which have led to the displacement of hundreds of thousands of people....

The media coverage of Yolanda is clearly much bigger. Unfortunately, the important lessons of this natural disaster are falling on deaf ears. Worse, some people are refusing to listen. Criticisms of the rescue and relief effort of the government are frowned upon as if those who are criticizing are not helping. But those who are criticizing are also helping. The critics are not just advertising what they have donated or have done as a volunteer. The critics care. In fact, this is one reason why they are very much disappointed with the Philippine government. While the Philippine politicians are preoccupied with their image, these people are more concerned on what needs to be done.

Yes, this lesson was not from Pablo. It was from Sendong. Sendong hit Mindanao a year before Pablo did. Sendong, internationally known as Washi was only a tropical storm. But with flash floods and landslides, more than 1000 people in Mindanao lost their lives. The above lessons compiled by BALSA Mindanao, a broad Mindanao-wide network of church and church-based organizations, schools, disaster response NGOs, local executives, professional groups, youth and students, women, partylists, and concerned individuals, can be summarized with the following questions and answers: 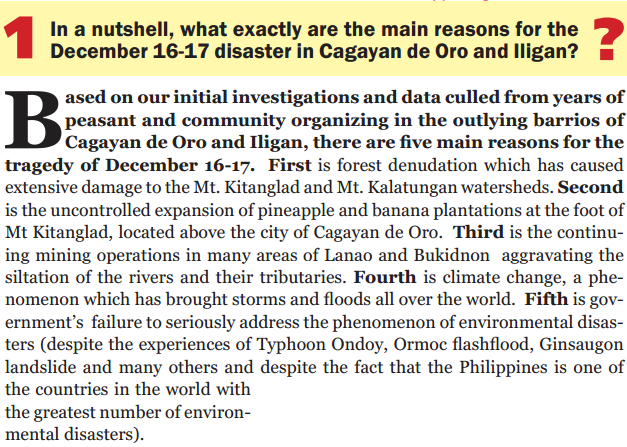 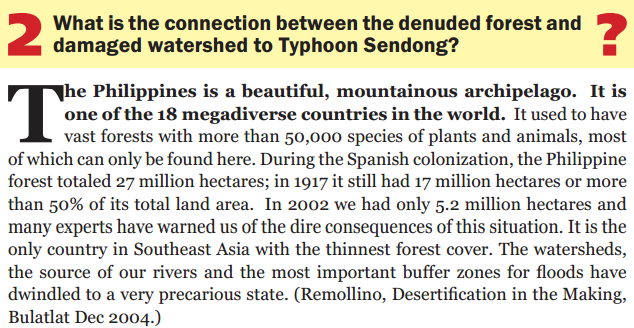 I will leave the remaining three questions as questions:


11. Is there a possibility of a disaster like Typhoon Sendong happening again in Mindanao or in any part of the country?
12. What are our demands to the Aquino administration in order to mitigate or avert tragedies such as typhoon Sendong?
13. What are the survivors’ demands to the government?


So we have Sendong, then Pablo, now Yolanda. Any questions? I hope this time we listen to the lessons....