November 28, 2013
After rescue and relief, rebuilding comes next. Rebuilding must attempt to mitigate the effects of a typhoon. Otherwise, communities will face the same tragedy when the next typhoon hits. It is also important that the extra measures take into account what these communities really need. The Philippines, with all of its islands, has a significant fraction of its people living in coastal communities. Fishing is a major part of livelihood as well as source of food. It is foolish, for example, to impose "no-build" zones on coast lines. We need to listen to one of the leaders of fishermen in the Philippines, Salvador France:


France said about 10 million Filipinos or roughly 10 percent of the country’s population live in coastal areas, the Philippines being an archipelago of 7,101 islands and islets. Declaring coastlines as no-build zones is “stupid,” France said. (Business Mirror, 27 November 2013)

One may suggest then to build homes that can resist both strong winds and storm surges. Though ideal, construction of these homes may require resources that are currently not within reach. To tackle a gigantic problem, it is useful to focus on steps that are smaller in scale but can be effective in achieving the most important goal: Preventing casualties in these natural disasters. The loss of loved ones especially young children is far more devastating than damaged properties. With this emphasis, there are solutions out there that not only address disaster preparedness, but also other challenges the country faces. Here is one example.

Thousands of schools were destroyed by the super typhoon Yolanda. 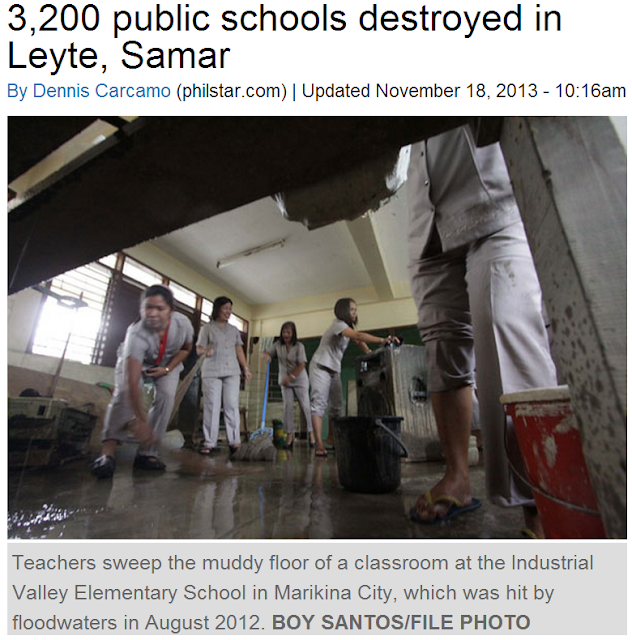 The photo above is not of a school recently damaged by Yolanda, but the title relays the information that thousands of schools were destroyed (The word "destroyed" was used instead of "damaged"). The Philippine Daily Inquirer has a photo of a school. This one is from Cebu, another island affected by Yolanda in addition to Samar and Leyte: 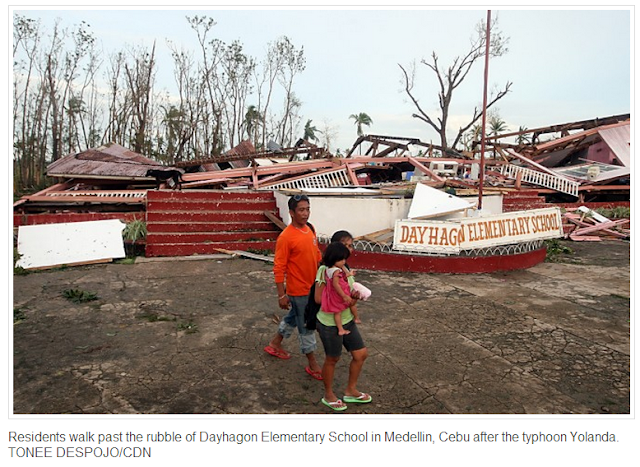 Seeing what the typhoon did to this elementary school demonstrates convincingly that this structure cannot withstand the strong winds of a typhoon. It is crystal clear that schools in this area require better design and construction. The fact that these schools have been destroyed provides an opportunity to rebuild. This reconstruction, however, should go far beyond just providing rooms where classes can be held.

Schools are usually built within the reach of everyone in a community. This makes evacuation orders easier to execute especially if it only involves a walking distance. Schools should be built with careful consideration of how many children live in a community. Schools can therefore be scaled according to the population of an area. Schools are supposed to have toilets that are adequate to serve the needs of all the children attending. Schools have rooms for a specific purpose like canteens and clinics. These rooms are important as well for an evacuation shelter. Some of these rooms can likewise be used as a warehouse for relief goods. Schools are therefore ideal evacuation shelters.

Bangladesh is one country that has always been in the news when it comes to deaths due to cyclones. In 1991, for example, almost 200,000 people died because of a cyclone and its accompanying storm surge. But after a couple of decades, the number of deaths has significantly decreased. This is not due to cyclones becoming less frequent. The decline in casualties comes from better disaster preparedness. In a report published by the International Federation of Red Cross and Red Crescent Societies, "Empowering Communities to Prepare for Cyclones", one cannot miss the following photo: