November 01, 2013
Based on the PISA tests - the Programme for International Student Assessment, China is home to the best performing schools in the world. In published reports, Shanghai and Hong Kong are among the top of the international ranking. PISA's leader, Andreas Schleicher, also notes that the results from Shanghai and Hong Kong are not mere pockets of success in China's educational system. The entire country, even schools from the poor provinces, has performed well in the PISA tests. Sean Coughlan of BBC quotes Schleicher in his report "China: The world's most clever country": 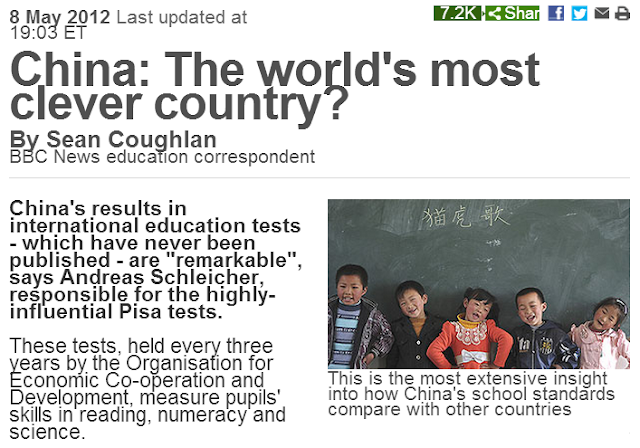 "... Mr Schleicher says the results reveal a picture of a society investing individually and collectively in education.
On a recent trip to a poor province in China, he says he saw that schools were often the most impressive buildings.
He says in the West, it is more likely to be a shopping centre.
"You get an image of a society that is investing in its future, rather than in current consumption."
There were also major cultural differences when teenagers were asked about why people succeeded at school.
"North Americans tell you typically it's all luck. 'I'm born talented in mathematics, or I'm born less talented so I'll study something else.'
"In Europe, it's all about social heritage: 'My father was a plumber so I'm going to be a plumber'.
"In China, more than nine out of 10 children tell you: 'It depends on the effort I invest and I can succeed if I study hard.'
"They take on responsibility. They can overcome obstacles and say 'I'm the owner of my own success', rather than blaming it on the system.""

Amid this success, China is now paying attention to an unwanted side-effect of its successful education system:  Excessive academic burden on children. The country is concerned about its children not being afforded a balanced and healthy environment to grow. To address this problem, the Ministry of Education has drafted ten rules to guide China's new reform on education. The rules are currently open for public comment from its citizens and these rules are as follows:


I am happy to see that China is seeing the fact that a child must be given the opportunity to experience being a child. I remember that when I was in grade school, I had always looked forward to going to school. Of course, there were also things that made school less attractive then. I never liked numerical grades. I never liked competition. I did not like homework nor supplementary materials for education. I did not like projects. I believed that we were attending schools to both learn and play, and not be subjected to cottage industries. I think there is a thing or two to learn from China's recent education reform.