Have We Lost Our Minds?

November 05, 2013
The DepEd K+12 curriculum is supposed to be implemented in phases. For this reason, some students remain on the old curriculum while the new curriculum is being introduced one year at a time. Only the students who enrolled in first grade in 2012 would have gone through the new K+12 curriculum while in high school, only those who began first year in 2012 would have received the new 6-year secondary education. This means that during this year (school year 2013-2014) first and second year high school students are under the new curriculum while third and fourth year high students are still studying under the old 10-year basic education program. The phased implementation is in fact displayed in one of the web sites of the Philippines' Department of Education:

With the above phased implementation, it is clear that grade 11, the first of the additional two years at the end of high school, can only be offered in 2016. The reason is simple: Only in 2016 would the first year high school students in 2012 have reached this stage. Providing the two additional years before 2016 would introduce the new curriculum to students who have not gone through any year of DepEd K+12. Students who would finish fourth year of high school in 2015, for example, have not had any opportunity to experience DepEd K+12. Yet, we see the following news: 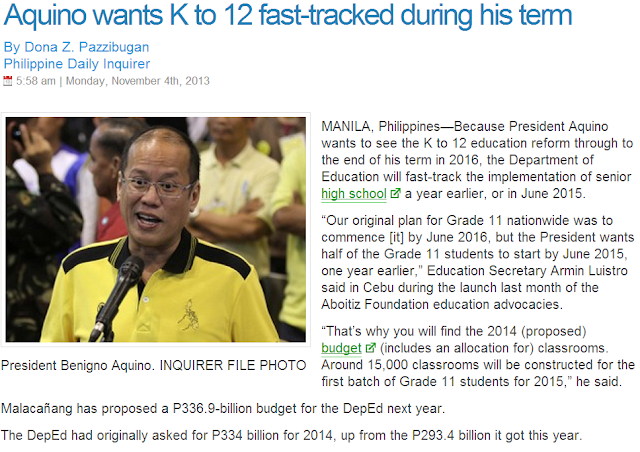 Seriously? The additional years brought by DepEd K+12 will indeed require additional classrooms. Basic education, however, requires so much more than just classrooms. Colleges have not even figured out how to handle the drop in enrollment in 2016. Now, it is going to come sooner. Where are the additional teachers coming from? Has this been sorted out? But most importantly, this fast track completely throws out the phased implementation. Providing grade 11 in 2015 to half the students means throwing hundreds of thousands of students into a new curriculum that was not intended for them. Students who would be finishing grade 10 in 2015 are students who went through all ten years of basic education under the old curriculum. Does this mean grade 11 is simply an appendix? President Aquino's thinking clearly illustrates what DepEd K+12 is really all about. It is not a holistic reform of basic education. It is simply a cosmetic addition. DepEd K+12 simply adds two years at the end of high school for show. This is one conclusion that can be easily drawn from the president's action, the truth that DepEd K+12 is nothing but a mere hodgepodge. The phased implementation is a hoax because it really does not matter. The president has shown this crystal clear.

Contrast this to the way educators in Finland think. Here is a quote from Pasi Sahlberg:


”Reforming schools is a slow process. To rush this process is to ruin it.”