Why Is Mother Tongue Education Important?

September 27, 2014
Among immigrants in the United States, several studies have shown that children who have proficiency in both English and their mother tongue tend to be more successful in school compared to their ethnic peers. (See, for example, Social Capital and the Adaptation of the Second Generation: The Case of Vietnamese Youth in New Orleans. Min Zhou and Carl L. Bankston III. International Migration Review, Vol. 28, No. 4, Special Issue: The New Second Generation (Winter, 1994), pp. 821-845) This, perhaps, can be attributed in part to closer family ties and parental cultural maintenance that emphasizes beliefs and practices that are socially constructive. These two strongly correlate with a child's retention of his or her parents' native tongue since this language is expected to be the major means of communication between immigrants and their children.

Mother tongue education, however, goes far beyond just benefiting society. It is about preserving one's ethnic identity and culture. It is true that choosing one language for all can be a lot more efficient, but one must also be concerned with the loss of diversity. The fact that the world has so many languages is a precious heritage, but this treasure only remains if there are people who could still read, speak and write in these languages. Some advocates of mother tongue education even suggests that basic education in the mother tongue first would facilitate cognitive development faster in young children. Thus, there are proponents that now insist that all of basic education in the early years must be given in the mother tongue of a child. In a country like the Philippines, where there are so many languages, such is daunting task. In a previous post on this blog, Languages in the Philippines: A Challenge for Basic Education, it is pointed out that even in schools where one language is dominant, there are still a substantial number of students that speak a different language. Masbateño, for example, is a language spoken by a significant fraction of households in region 5 in the Philippines, and is the major language in the province of Masbate, but schools in Masbate have been designated to use Bicolano, a language distinct from Masbateño and spoken by the majority from Region 5. In addition, finding teachers that can teach all subjects in the native tongue of each pupil enrolled in any one of these schools is perhaps close to impossible.

To preserve the mother tongue of a child, continuing instruction beyond home and into preschool, kindergarten and the elementary years is needed. If this is the objective then having at least part of the instruction during these years in the native tongue can be very helpful. This is much less demanding than mother tongue based multilingual education. Most of the subjects can therefore be taught in a second language. Of course, there is concern that development in a second language may simply compromise development in the native tongue. At least, in this case, there is effort to preserve fluency in the mother tongue.

A study published in the journal Child Development addresses the question of what happens to a child's proficiency in a native tongue after going through school where the medium of instruction is a second language. 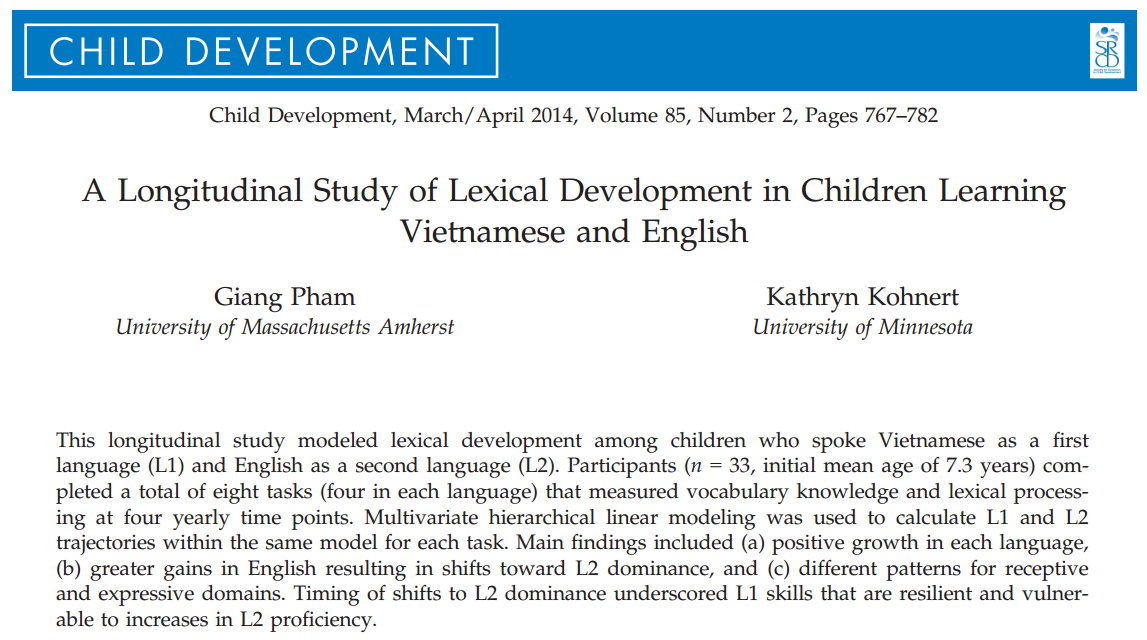 The languages considered in the above study are Vietnamese and English. These two languages are obviously very different unlike Spanish versus English, Tagalog versus Spanish, or even Masbateño versus Bicolano. Vietnamese and English do not even share similar character sets. Thus, this study in so many ways is highly transferable to other languages if one is asking the question of whether learning in English is detrimental to one's native tongue.

The pupils in this study are given 90-minute instruction in Vietnamese everyday, in addition to the normal classes, all taught in English, in the first five years of basic education. Thus, throughout these years, considerable effort is made to help children continue developing in their native tongue. The results of the study are summarized in the graphs below. These are measures of receptive vocabulary (being able to point to a picture that matches a given word) and expressive vocabulary (being able to name what a picture depicts) in both languages, Vietnamese (shown as dashed line) and English (shown as solid line), receptive is shown on the left and expressive is on the right:

I guess, in a way, this mimics my own experience. I can read posts on Facebook in Tagalog without any difficulty (receptive), but it is harder for me to post in Tagalog (expressive). As seen in the above figures, the ability that lags is expressive vocabulary in the native tongue. It should be emphasized, however, that for young children there is significant progress in both languages and the native tongue is not really fully compromised.