Can We Really Teach "Right versus Wrong"?

September 17, 2014
We all would like basic education to teach our children what is right and what is wrong. There are even specific subjects in schools on character education, proper manners and right conduct, and good citizenship. We look forward to schools that can help raise children who are more aware and caring for the environment. As moral beings, how we really choose between "right" and "wrong" is not well understood. A scientific experiment that addresses this question is extremely difficult to design but a simple question such as whether teaching morality makes a difference needs an answer. One challenge here is, oftentimes, we cannot even agree on what is right and what is wrong.

There is a new study published in Science that attempts for the first time to answer some of these important moral questions. The study is performed not in the laboratory, but in the real world, providing a a rare glimpse into the moral dynamics of a society. The study co-authored by Wilhelm Hofmann, Daniel C. Wisneski, Mark J. Brandt, and Linda J. Skitka has the following abstract: 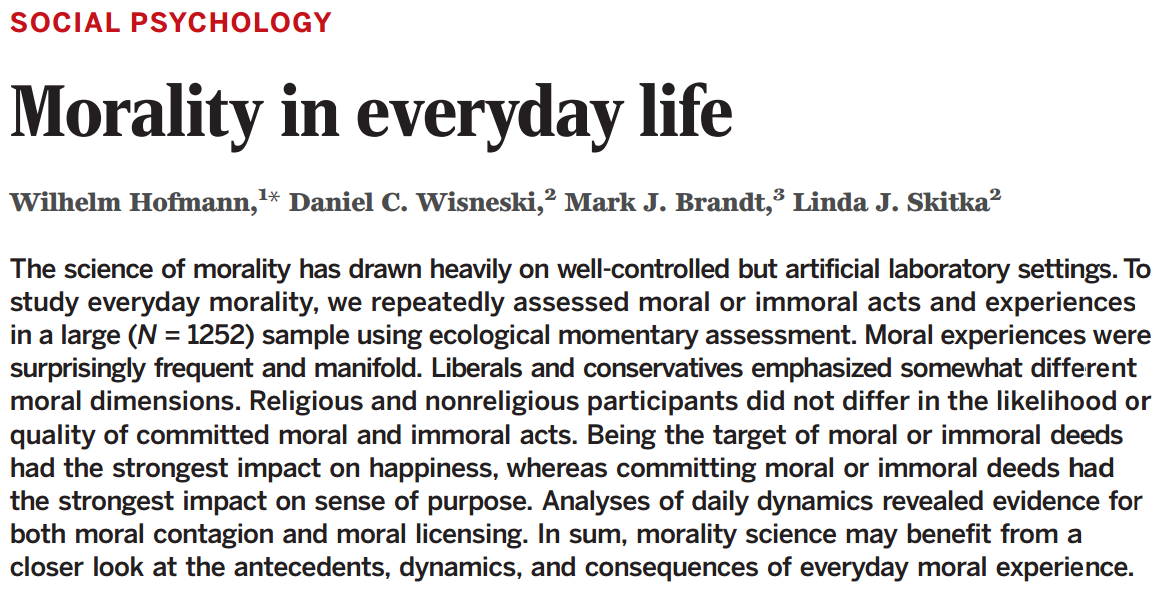 The method employed by the researchers, ecological momentary assessment, makes use of smart phones which allow for signaling and assessing each individual participant randomly and five times daily for three days. Each participant therefore can report if he or she has committed or witnessed a moral or immoral act. Each participant is asked to describe the event under one of the following categories: Care/Harm, Fairness/Unfairness, Loyalty/Disloyalty, Authority/Subversion, Sanctity/Degradation,  Liberty/Oppression, Honesty/Dishonesty, and Self-Discipline/Lack of Self-Discipline. Since the responses from the participants are self-reported, it should be clear that these individuals are citing moral or immoral acts based on what they perceive as moral or immoral. Hence, in this study, when a person reports committing an immoral act, he or she is aware that he is violating his or her own beliefs of what is right and what is wrong.  However, even in this large sampling, the survey also shows that there is considerable consensus among all participants on what constitutes a moral or immoral act. Both religiosity and political ideology are also gathered to see if these have an effect on a person's morality. Emotional outcomes such as happiness or guilt after a reported event are likewise included in participants' responses. Since the events are recorded chronologically, a correlation, if present between past and future events, can be drawn.

The study shows that religious and non-religious people are both likely to commit immoral acts. Where these two groups slightly differ is in their emotional response:

Religious people feel more guilty, shameful and embarrassed after committing an immoral act. Religious people likewise feel more proud, elevated and grateful after committing a moral act. Grouped according to political ideology, that is, liberal or conservative, the likelihood of misbehaving is the same, but there are fine differences in emphasis. Both groups do focus on care versus harm since this is the most reported category, but liberals seem to dwell more on fairness/unfairness, honesty/dishonesty, and liberty/oppression while conservatives seem to be more occupied with loyalty/disloyalty, authority/subversion, and sanctity/degradation.

Thus, it seems that knowledge alone does not determine whether a person would behave or misbehave. There are also correlations found between moral events. It is observed that committing a moral act earlier in the day is associated with an above-average likelihood of a subsequent immoral act and a decreased likelihood of a subsequent moral act. This sounds like earning a right to misbehave right after doing a good deed. Another correlation is that individuals who are at the receiving end of a good deed earlier in the day are more likely to behave later in the day. This one definitely shows that good character is seldom taught but often caught. Good acts can be contagious and can spread, but a good act can also lift self-righteousness which may be self perceived as a license to do bad.