September 30, 2014
A child growing up could be exposed quite early to competition. There are contests and pageants. In these activities, it is clear that comparisons between children are made. A child therefore inherently develops an objective, not to be seen as a loser, but as a winner. But contests are actually teaching a child one other thing. We may not be aware of it, but saying to a child, "You are smart", may in fact be no different from saying, "You are stupid". Both assume that academic achievement comes from an intrinsic talent or lack thereof. This obviously goes against what learning is all about.

At Mason Crest Elementary School in Annandale, where my children are enrolled, the specific mission is "to ensure high levels of learning for all." This mission becomes more obvious with the fact that the teachers in the school generally subscribe to a "mastery" achievement goal as opposed to a "performance" achievement goal. These two goals are usually regarded as two contrasting motivations for learning. The difference between the two are explained for example by Meece, Anderman and Anderman:


A mastery goal orientation is defined in terms of a focus on developing one's abilities, mastering a new skill, trying to accomplish something challenging, and trying to understand learning materials. Success is evaluated in terms of self-improvement, and students derive satisfaction from the inherent qualities of the task, such as its interest and challenge. By contrast, a performance goal orientation represents a focus on demonstrating high ability relative to others, striving to be better than others, and using social comparison standards to make judgments of ability and performance. A sense of accomplishment is derived from doing better than others and surpassing normative performance standards.

The following provide specific examples to help us understand the difference between the two approaches:
The two goals do appear dichotomous. In reality, we may actually be subscribing to a combination of both - the real difference lies mainly on what we heavily emphasize.


Growing up in the Philippines, I was exposed early on to academic contests. In fact, I even won first place in an On the Spot Mathematics contest at the Centro Escolar University when I was in first grade. That was at the age of 6 and I was already competing. Competitions are indeed widespread such that one may safely extrapolate that performance goal orientation is quite emphasized in Philippine society. Fortunately, there may be some shift towards mastery goal orientation, as suggested by the following memorandum from the Philippines' DepEd:

The first program is intended for regular pupils/students. This will be conducted on six Saturdays, 8:00 a.m. to 12:00 noon from August 9 to September 13, 2014. The sessions will be for pupils/students who belong from the 25th to the 85th percentile at each grade/year level from Grade 1 to Fourth Year. A written permit from the parents is necessary.

The first program aims to:
1. provide the pupils and students the opportunity to explore Mathematics without the threat of tests;
2. review the materials covered last school year that enabled them to do well in Mathematics in the present school year; and
3. prepare the Grade 6 pupils and Fourth Year students for entrance examinations for First Year high school and college levels.

The second program is for mathematically talented pupils/students. This will be conducted on seven Saturdays, 8:00 a.m. to 12:00 noon from October 11 to November 29, 2014, except November 1, 2014. The sessions will be for pupils/students who belong to the top 15th percentile. The school principal shall endorse the pupils/students who wish to participate, along with a written permit from their
parents/guardians.

The second program aims to:
1. prepare the Grade 6 pupils and Fourth Year students for entrance examinations for First Year high school and college levels; and
2. prepare them for the Metrobank-MTAP-DepEd Math Challenge Competition.

The program still does carry quite a spirit of competition, but at least, it now opens the program to a wider set of students. The following are photos from an elementary school in Paete, Laguna (These photos are copied from the Facebook page of Ibaba Elementary School) during one of the weekends of the first program: 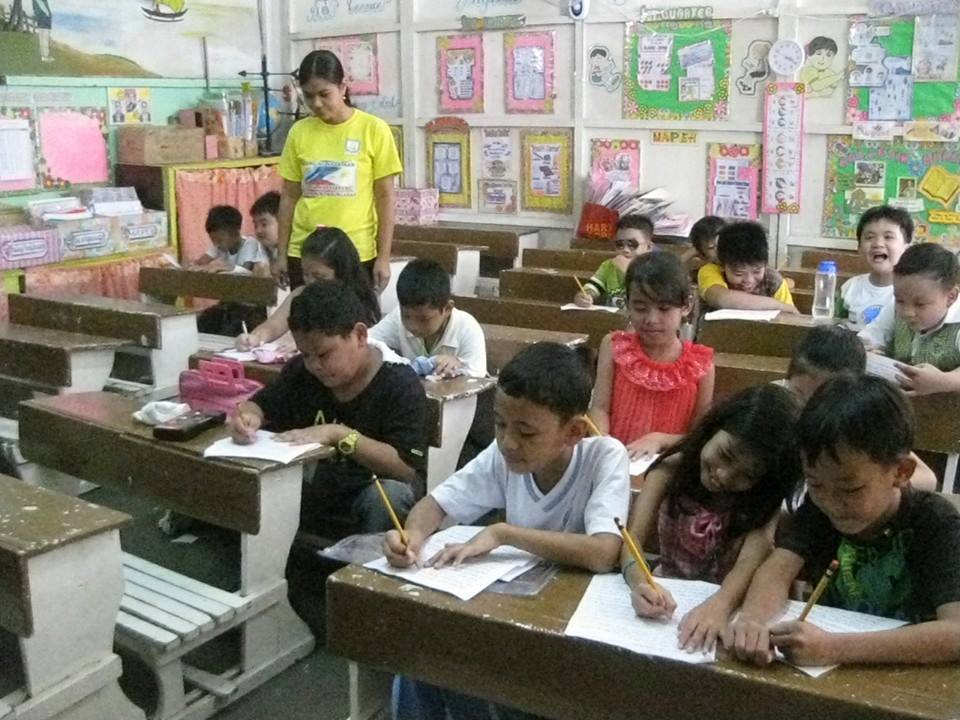 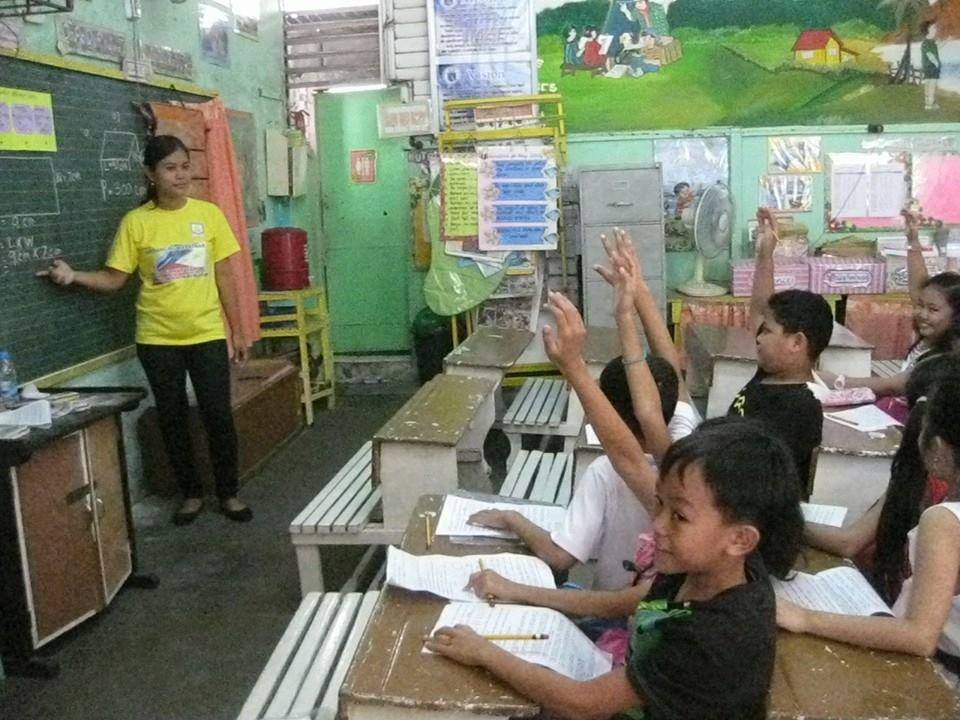 The children seem to be enjoying the extra hours of mathematics instruction. Still, it is unfortunate that there seems to be no program for the lowest 15th percentile when these students probably need the most in terms of additional help and time in mathematics.

One clear disadvantage of competition is that it caters only to those who are perceived to have the required talent already. It does promote excellence, but unfortunately, at the expense of equity. There is no education for all. A second disadvantage which is now only becoming clear from recent research is that performance goal does not really predict consistently academic outcomes. It is the mastery achievement goal that does. This conclusion comes from an extensive study that involved 2000 students: 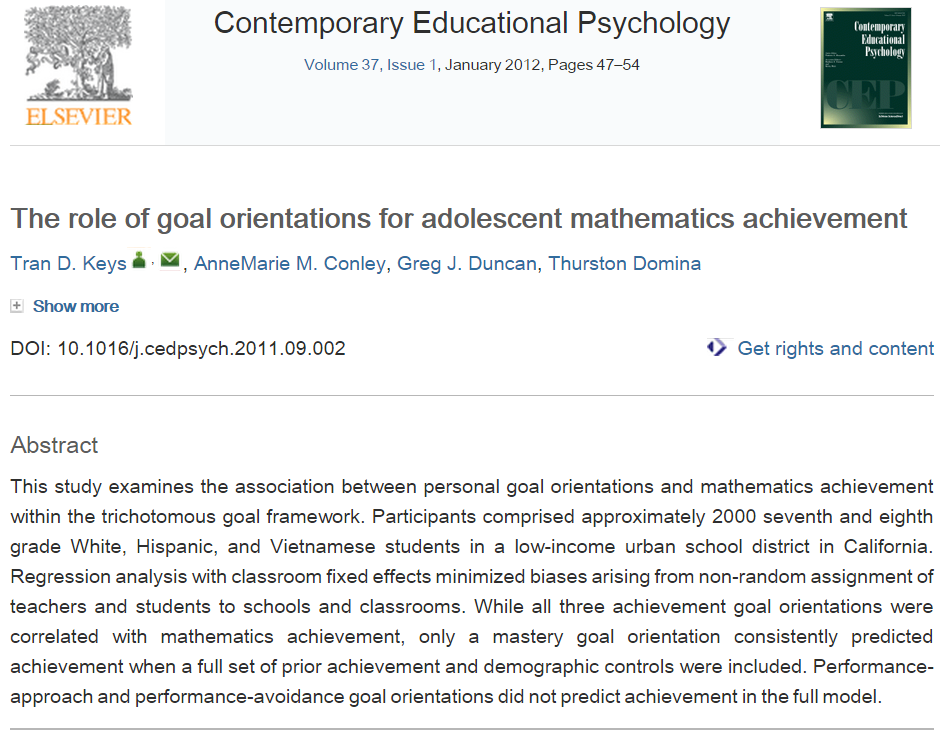 It could simply be a self-fulfilling prophecy when we think that skills and proficiency are stable personal traits, and act based on such belief. We must, however, recognize that when we do subscribe to this belief, we are indeed suggesting that education does not really work. It only makes the "smart" ones "smarter" and keep the "dumb" ones "dumb". This is incorrect since learning should happen inside schools.