September 25, 2014
There are clearly stages in human learning. Reading, for example, starts with recognizing letters followed by short and familiar words like "mom", "dad", "cat" and "dog". Short stories with pictures are, of course, favored by young children. Then, near the end of third grade, pupils are expected to jump from understanding stories to gathering information from text, a leap from fiction to nonfiction. The transition is quite dramatic such that it is quite common to see children stumble and fail at this stage. In Mathematics, the next challenging stage after learning about whole numbers is the fraction. Pause for a moment and imagine a child who has been told over and over again that 4 is always greater than 3. It is then easy to see that it may be quite shocking for this child to be told that the opposite is true for 1/4 and 1/3. Then, one can follow that by asking which one is bigger, 2/7 or 3/8?

Understanding fractions is a very important stage in mathematics. Failing at this point usually means trouble ahead in algebra, the next stage where functions are introduced. Designing a curriculum can therefore benefit greatly if concepts to be learned are mapped to show correlations. This enables identification of how skills and concepts learned in earlier years predict success in more advanced materials.

Before introducing fractions, students in most elementary schools are taught the following in mathematics. I am going to use specific examples of games that illustrate some of the math lessons taught in the early grades. Students in the early years, for example, are taught how to add:

Students are also trained to round off numbers. For example, in the game below, a child must find the ghost that represents the nearest hundred. In this specific case, to win, the child must guide mathman to eat the orange ghost marked 300.

The above illustrate some of the lessons in mathematics prior to introducing fractions:

How well a child does in the first few years of mathematics relates to a child's future understanding of fractions is an important question to address. This is the topic of a paper published in Child Development, "Sources of Individual Differences in Children's Understanding of Fractions". This empirical study specifically looks at the relationships, if there are any, between a child's understanding of fractions at fourth grade and a child's previous records in first grade on reading, concepts and applications, nonverbal reasoning, language composite, vocabulary, listening comprehension, attentive behavior, listening recall, visual-spatial memory, and in second grade on number line estimation and arithmetic computations. Math, after all, is just one of the subjects learned in elementary school, so its dependency on domain general competencies must likewise be examined. The abstract of the paper is shown below: 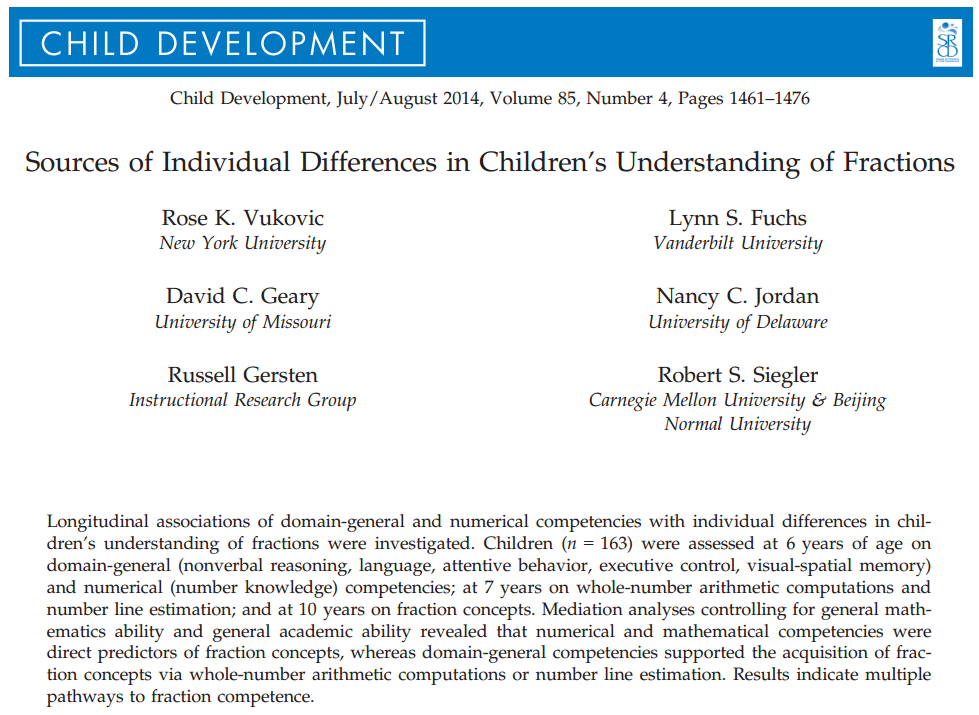 The competency that is found to be a direct predictor of good future performance with fractions is number knowledge. This is measured in first graders via the Number Sets Test. An example is shown below:
The above study is quite difficult to analyze. First, these are only correlations and not direct studies of causation. Second, the way earlier skills are emphasized and taught in school may have an effect on how a child develops understanding of fractions. Third, there are obvious overlaps between competencies and it is not straightforward to disentangle all of these. The authors, however, offer the following conclusions: 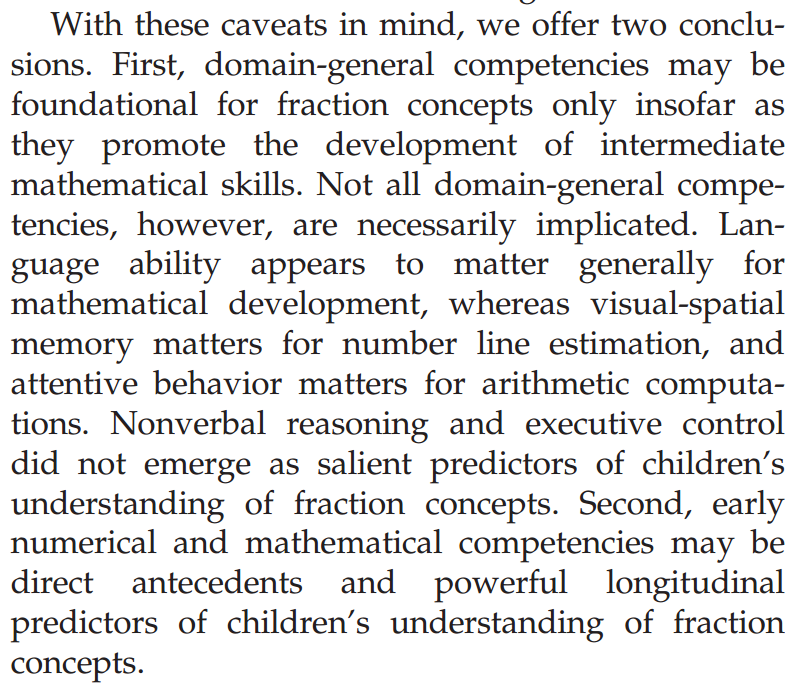 Since there are various factors and pathways through which a child could learn fractions, the analysis is truly challenging. What is obvious from this study, however, is that learning math is indeed composed of stages and a child's ability to master early number skills correlates with future success in higher mathematics.