September 01, 2014
This is a very sad news story from Pangasinan, Philippines. A police officer shot dead several individuals inside a classroom inside the Lingayen National High School. The officer was collecting debts from teachers when an altercation began and the officer went amuck.

The following is a statement from the Teachers' Dignity Coalition:


The shocking incident in Pangasinan National High School yesterday should serve as an eye opener for all of us. Two major issues of public education sector were put in highlight- violence and poverty. The shooting that resulted to the death of three people, two of them teachers and wounding of several others is the latest recorded incident of violence in schools involving teachers as victims. However, the reason behind this shooting is more appalling. According to the reports and the initial investigation, the gunman, who is a member of Pangasinan police force is collecting loans from his clients- the teachers when an altercation happen that led to the shooting spree. It is almost incomprehensible that some people kill to collect loans while others die because of debt.


With this incident, we would like to validate the public perception that teachers- or at least many of them are living in what we describe as “hand to hand” existence- worse than “hand to mouth” description. That is the literal handing of money to lenders right after they receive their salaries.

Teachers are the favorite clients of lending institutions and loan sharks because they are good payers. Teachers frequent the lending queues to make ends meet. And up to the point beyond the minimum take-home pay policy, teachers would find ways to borrow money- pawning their ATM cards of even certifying payments from anticipated bonuses to lenders. Yes, teachers are living in a borrowed income.

Thus, we call on the government to prevent the incidents of this kind in the future by providing just salaries and adequate remuneration and benefits- monetary or otherwise. Particularly, we call on President Aquino to certify Senate Bill 2146 and Senate Bill 2365 filed by young senators Sonny Angara and Bam Aquino, respectively. SB 2146 seeks to reform the tax system and collect more taxes from the rich and less from the poor while SB 2365 pushes for a P10, 000.00 additional compensation for public school teachers. These proposed measures, if enacted into law would surely augment the living of our teachers.

This government should sincerely care for the welfare of its teachers and never allow them to be killed for an unpaid loan. #


The following is a statement from the Alliance of Concerned Teachers: 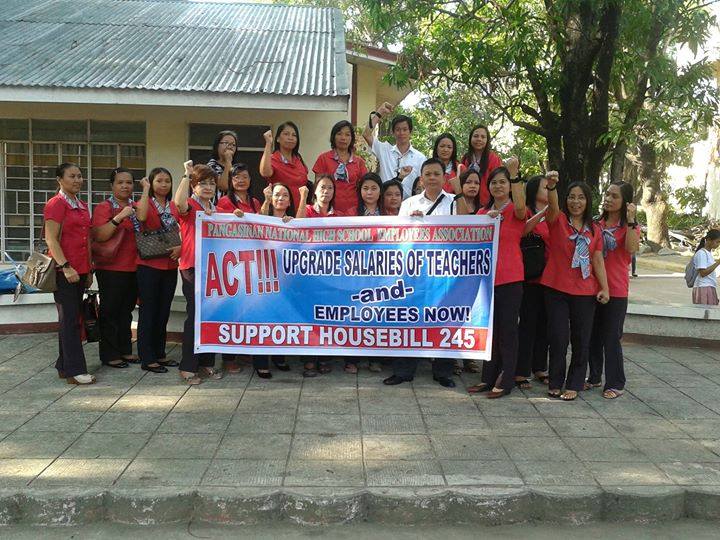 Our teachers from PNHS are among the active campaigners for the Alliance of Concerned Teachers' call for salary upgrading for public school teachers and government employees through ACT Teachers' PL's House Bill 245. This is not the first time teachers fell prey to loan sharks and "trigger-happy" lenders. These incidents are very telling of the state of our teachers and our education system. It is very surprising to hear that there are teachers who pawn (sangla) their ATM cards or that going to "London" means going to "loan doon", "loan dito". Another teacher shared the story of fellow teachers in their municipality wherein the money lender posted pictures of teachers who cannot pay their debts along electric posts and waiting sheds in the area.

Consider this, the persons molding the minds of our youth- the country's future are paid only P18,549/month (for Teacher I) while a highschool graduate entering the Philippine Military Academy as a cadet is given an allowance of around P21,000/month; while a call center gets almost the same as the Teacher 1. A recent study shows the declining number of college students taking up education, add this to the number of teachers and education graduates leaving for other work or abroad; to the perennial scarcity of educational materials, classrooms and facilities and we got a crisis in our education system.

To make things worse, the government has continuously implemented policies that worsen the conditions of our teachers and education system such as the chaotic K+12 and the performance-based system/RPMS (wherein teachers are expected for a 130% work output). These policies will further enforce the teachers being as what Conrado de Quiro's says "the national animal".

As we call for justice to our teachers who were gunned down today, we call for justice for the whole education sector. Not the "just-tiis" our teachers and the people are going through while the few and our de facto national-collector are amassing wealth from people's money (cut the pork, the perks and the lump sum!). This justice means our money, the people's money should be spent in properly compensating our educators, for providing free/affordable education for the people that is scientific, mass-oriented and nationalist and to social services.