Efficiency and Effectiveness of a School System

September 08, 2014
The school system can be viewed as a production line that has both input and output. The starting materials are the resources while the education outcomes comprise the result. Considering the output and comparing this with what went in can provide a rough measure for efficiency. An efficient system is one that achieves so much even with quite limited resources. A recent report attempts to assess the efficiency of school systems worldwide by taking into account teacher salaries and pupil to teacher ratio as indicators of input and test scores in an international standardized test score as a gauge for the output:

The results of the study are summarized in the following ranking: 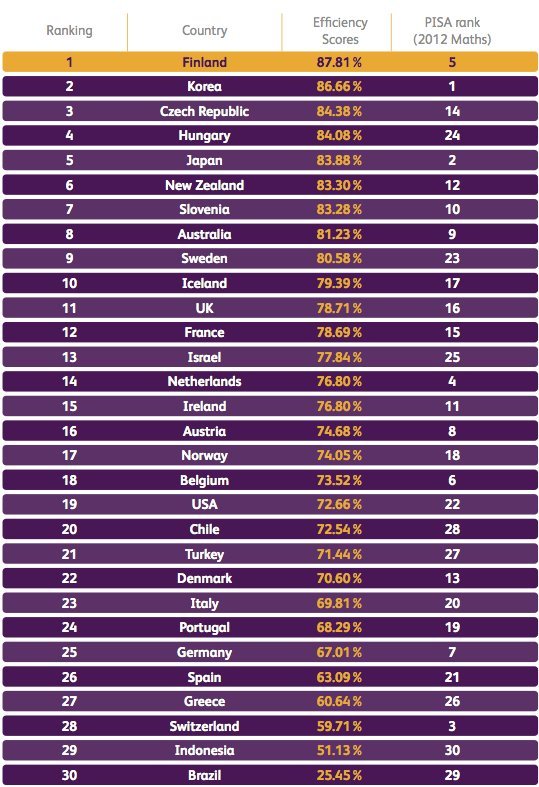 According the above ranking, countries have also been divided into the following five groups:


GROUP 1 Elite Performers : There is always room for improvement despite the fact that these countries score well in both the efficiency and quality stakes.

GROUP 2 Efficient and Effective : These countries are doing relatively well on both efficiency and producing high PISA scores. They are not in the Elite benchmark countries but they are close.

GROUP 3 More Effective than Efficient : Overspending or bloated These countries perform better in quality measures than in terms of efficiency. This may be because they can prioritise outcomes over cost, it may be because their system generates other outcomes that aren’t captured by PISA rankings. Or more simply, it may be because the system is over-resourced beyond a threshold required to drive quality increases.

GROUP 4 More Efficient than Effective : Underspending or underperforming These countries, by comparison, are more efficient than educationally effective. This could be for the simple reason that they have constraints which prevent their system from moving to the next level (e.g. low salaries may prevent the teaching profession from being able to recruit highly skilled individuals). More interestingly, if extensive resources are already being deployed, it could be the case that underlying flaws exist in the education delivery model – the system has the potential to increase outputs for no additional inputs by making policy changes.

GROUP 5 Inefficient and Ineffective : These systems are inefficient and at the same time do not produce comparatively good outcomes. The ultimate ambition is to occupy a space in the upper-right quadrant, but progression either horizontally or vertically (increasing quality or efficiency) in the first instance could be the catalyst to drive improvements in both dimensions.


The Philippines is not included in the above study but it is quite straightforward to determine where it belongs. The Philippines in its brief participation in international exams ranks similarly to Indonesia. How much the Philippines invests in public education in terms of teachers' salaries and classroom sizes is likewise as dismal as those in Indonesia. Thus, the Philippines clearly belongs to the Inefficient and Ineffective Group.

Effectiveness requires minimum input. With classroom shortages and poor working conditions for teachers, the Philippines cannot expect a good outcome from its school system. Philippine basic education also suffers in terms of efficiency. The reason here is its focus on excellence and competition. There are elite schools that are very selective in its enrollment and at the same time, these schools likewise attract the best teachers. Hence, much of the resources which are already severely limited go to where these are least needed. The emphasis on excellence sacrifices equity. Students who need most and schools that require more resources are simply neglected and ignored. Such school system therefore takes pride in producing quite a few excellent alumni while leaving most of the population poorly educated. Clearly, in order for the Philippines to improve its education system, it must dramatically change its culture. It must switch from a focus on excellence to an emphasis on equity. This addresses efficiency and solves half of the problem. For the other half, there is no solution other than increasing the budget for education. The number of children in the Philippines has grown significantly in the past decade. This alone requires greater funding.

With the above in mind, it should be crystal clear that changing the curriculum does not address any of these problems. DepEd's K+12 does not and can not solve the problems of Philippine basic education.