Can a Child Tell the Difference between a Good Teacher and a Bad One?

September 18, 2014
There are various traits that define an effective teacher so perhaps, it is useful to focus on one trait. Can a child tell if a teacher is a reliable source of information? This question is specific enough that it could be addressed in an experiment. Researchers from Boston University have in fact performed a study to find out if children can discern credibility. The study published in the journal Child Development is entitled "“Why Does Rain Fall?”: Children Prefer to Learn From an Informant Who Uses Noncircular Explanations": 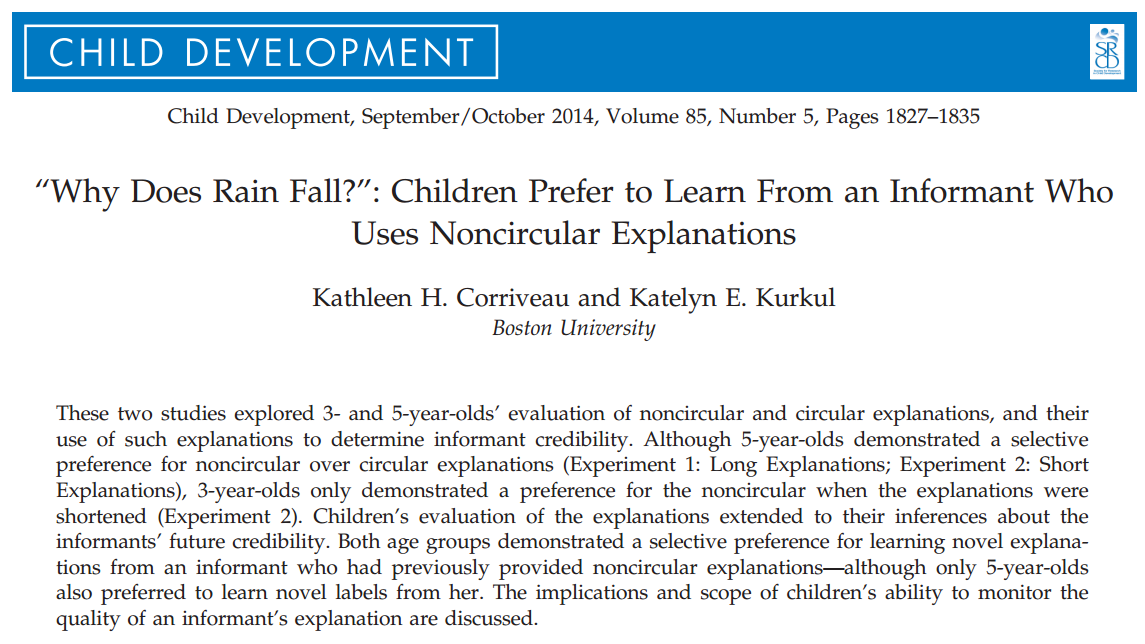 Children can indeed tell if someone is just pulling their leg. Whether this is simply a hunch is addressed by the above experiment. The study involves thirty three children, seventeen are 3-year olds and sixteen are 5-year olds. All have English as their native tongue and all come from either middle-class or upper middle-class households who visit the Boston Museum of Science. Given a phenomenon like rainfall, the children are provided with two explanations, one that just goes around and provides no explanation, and another that actually explains. The following are examples:

Experiments 1 and 2 are the long and short versions, respectively. After the children have gone through the above examples, a new set of situations are introduced, and again with two sets of answers, one from each of the informants in the previous experiment:

In the above, both responses are not circular and both sound plausible so it is really up to the children which response they would prefer. For novel explanations, all children prefer the answer given by the informant who provided a real explanation in the previous experiment. For novel labels, only the 5-year olds are discriminating, preferring once more the informant who is deemed more reliable the first time.

This study provides evidence that children are indeed able to gauge the credibility of an informant (or teacher) and the study thus concludes:

Perhaps, what is equally intriguing is why, as adults, some of us have grown to become quite gullible.