How Do Children Learn Math?

September 05, 2014
If an adult still uses one's fingers to evaluate a product like 3 multiplied by 3, legitimate concerns can be raised regarding that adult's mathematical aptitude. If an adult manages to solve 3 multiplied by 3 by considering 3 groups of 3, and going through 3, 6, 9, similarly, questions can be reasonably asked regarding that adult's capability. Adults simply retrieve 9 from their minds as the answer to 3 times 3, no processing required. Adults solve problems oftentimes by just pulling the answer from their memory. This is a simple retrieval of facts from memory. In this manner, the human brain is quite similar to a computer. A computer uses both memory and storage so that it does not have to burden its processor with every operation.

The suggestion that the way humans think is similar to that of a computer should somehow help us understand why learning requires both content and skills. Acquiring skills is necessary so that processing information becomes possible but content is equally important since most problems need not be solved from scratch every time. Even problems that are yet to be solved usually take cues from somewhere. After all, higher-order thinking does involve the ability to transfer, think critically, and solve problems. All of these require remembering some information.

The study highlighted in the above news article has been recently published in Nature Neuroscience:

The chart below (copied from the paper) illustrates what can be behaviorally observed: 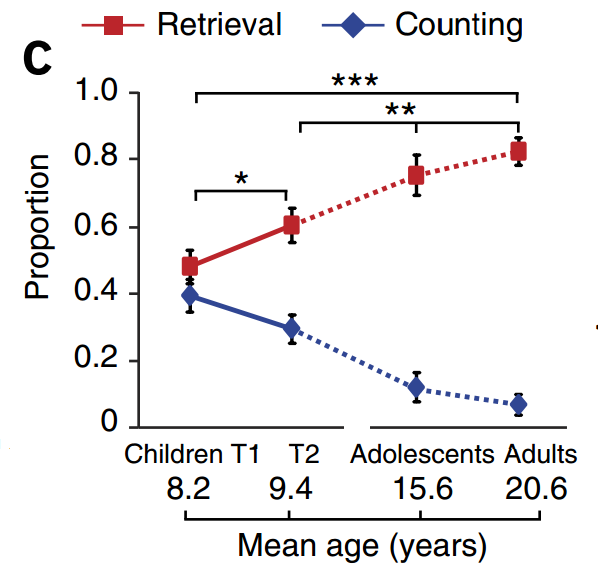 The chart above simply illustrates that as we grow older, we do retrieve from our memory answers to arithmetic problems. This is vastly different from our early childhood years during which we still rely on counting with our fingers. The above changes in behavior are found to correlate with changes in the activity within the brain. Below is a chart (also copied from the paper) that displays an increase in activity inside the hippocampus, the region of the brain involved in memory retrieval: 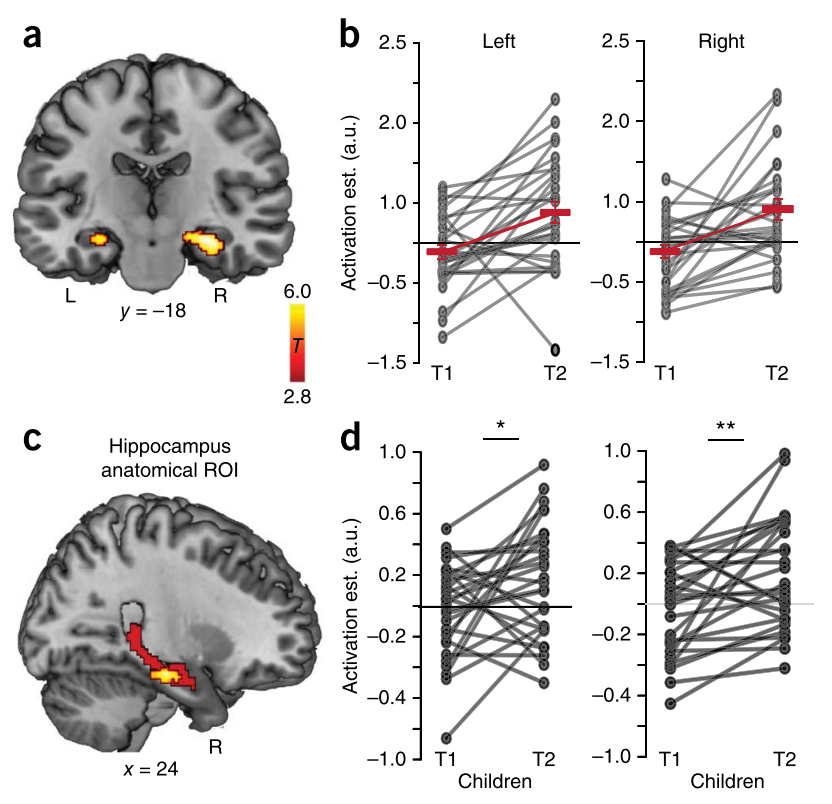 T1 and T2 correspond to the same time periods shown in the previous graph (T1 is when the children were 8 years old and T2 is when these children were 9). Science Daily describes the results of the study with the following more publicly digestible paragraph:


During the study, as the children aged from an average of 8.2 to 9.4 years, they became faster and more accurate at solving math problems, and relied more on retrieving math facts from memory and less on counting. As these shifts in strategy took place, the researchers saw several changes in the children's brains. The hippocampus, a region with many roles in shaping new memories, was activated more in children's brains after one year. Regions involved in counting, including parts of the prefrontal and parietal cortex, were activated less.

So perhaps, our previous discussion is in fact not merely a product of our own imagination. And the teachers we have had forty years ago knew all along that we had to memorize the multiplication table....