Martial Arts as an Intervention Tool in Basic Education

September 10, 2014
In search for innovations in education, we frequently look at new tools or technology. There is no doubt that computers, for example, can aid in education. However, there is a distinct possibility that some methods we have inherited from past generations can do the same. After all, basic education has been a human endeavor for so long.

One key determinant in learning is the executive function of the brain. The executive function includes self-control, staying focused, discipline, and flexibility. Without these capabilities, learning can become a very difficult task. It is one reason why classroom management in the early years is particularly important. Of course, in the old days, discipline was strictly enforced in each classroom. Nowadays, independence combined with a sense of responsibility is preferred. This new way obviously demands a lot more from a child's executive function. It is clear that children vary from each other in the way they develop executive function. Some demonstrate the ability quite early while some are a bit late especially children who have an attention deficit - hyperactive disorder as well as those who fit in the autism spectrum disorder. But even without these disorders, it is no secret that developing executive function is a challenging task.

Executive function is truly central to the future of a child. A study published in the Proc. Natl. Acad. USA by Moffitt and coworkers states in its abstract, "Following a cohort of 1,000 children from birth to the age of 32 y, we show that childhood self-control predicts physical health, substance dependence, personal finances, and criminal offending outcomes, following a gradient of self-control. Effects of children's self-control could be disentangled from their intelligence and social class as well as from mistakes they made as adolescents. In another cohort of 500 sibling-pairs, the sibling with lower self-control had poorer outcomes, despite shared family background. Interventions addressing self-control might reduce a panoply of societal costs, save taxpayers money, and promote prosperity."

One of the interventions examined in the above review is martial arts. For this particular intervention, one of the studies reviewed is the one made by Lakes and Hoyt, published in the Journal of Applied Developmental Psychology in 2004. Executive function can be measured by a combination of standardized tests (an example is the Wechsler Intelligence Scale for Children-Third Edition (WISC-III) which can measure distractability), observer-rated measures (these are questionnaires filled out by trained evaluators), and ratings made by both parents and teachers. With these assessment tools, the impact of an intervention can therefore be evaluated. And here is the abstract of the Lakes and Hoyt paper:

The impact of school-based Tae Kwon Do training on self-regulatory abilities was examined. A self-regulation framework including three domains (cognitive, affective, and physical) was presented. Children (N = 207) from kindergarten through Grade 5 were randomly assigned by homeroom class to either the intervention (martial arts) group or a comparison (traditional physical education) group. Outcomes were assessed using multidimensional, multimodal assessments. After a 3-month intervention, results indicated that the martial arts group demonstrated greater improvements than the comparison group in areas of cognitive self-regulation, affective self-regulation, prosocial behavior, classroom conduct, and performance on a mental math test. A significant Group × Gender interaction was found for cognitive self-regulation and classroom conduct, with boys showing greater improvements than girls. Possible explanations of this interaction as well as implications for components of martial arts training for the development of self-regulation in school-age children are discussed.

In addition to the gender difference, the study also finds that the martial arts intervention is more effective on older children (3rd grade or higher) than on younger children (kindergarten to 2nd grade). Another study, published way back in 1986, by Trulson in the journal Human Relations even compares the effectiveness of two martial arts classes. One is traditional which not only teaches skills but also keep the students aware of moral and societal values and another treats martial arts purely as a sport. It turns out that treating martial arts only as a sport or a set of skills actually does the opposite: Adolescents in this program become worse in their executive function. Adolescents that were taught martial arts in the traditional way in which the philosophical and psychological aspects are also emphasized improve significantly their executive function. Thus, it is clear that a successful executive function intervention not only should emphasize the skills, but also the personal and social dimensions highlighting the last sentence of the abstract of the review mentioned above:

Reading all of the above text does not really compare to observing a classroom where martial arts is taught.  Having experienced an actual karate class makes the above studies hit closer at home. 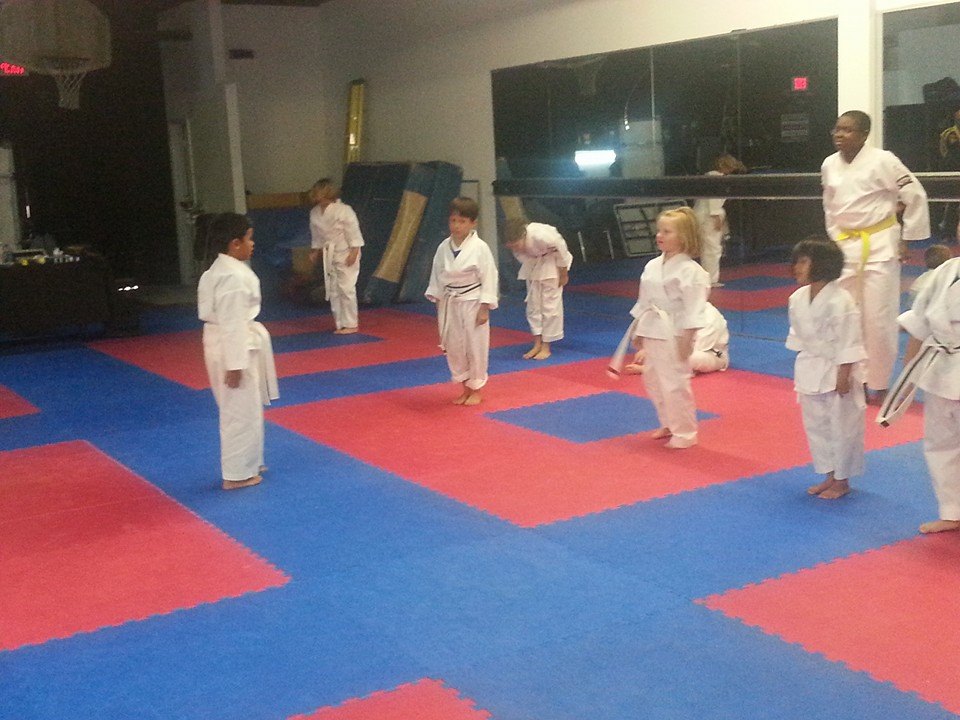 The above is a photo taken in Dietrich's Karate, Fitness and Life Skills in Burke, Virginia. An 8-year old boy, my son, is currently leading the group in one activity. The school has the following clip on its web page: 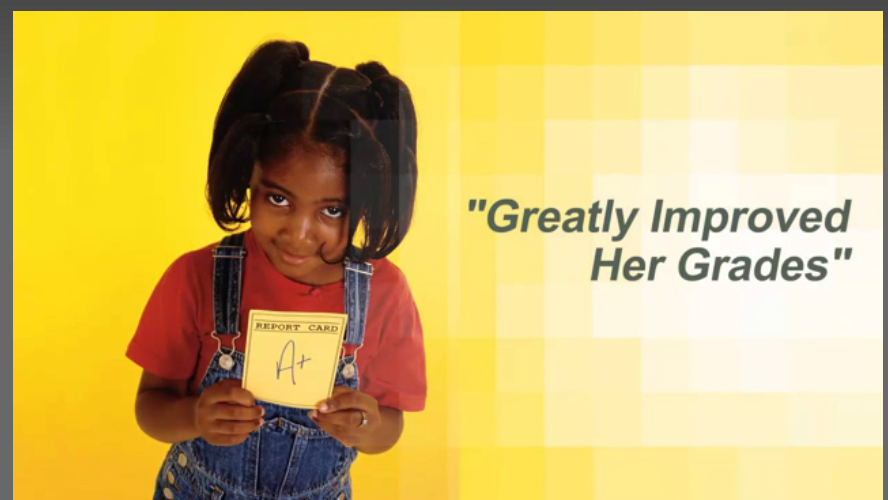 It is going to take some time before we even see that A+, but by observing how the art is taught, one could clearly see why these karate lessons can help improve executive function. Throughout each lesson, the master makes sure that all students are aware of why a move is being taught. It is straightforward why this intervention targets directly executive function. Karate requires focus, discipline, patience, self-control and perseverance. However, the traditional way that karate is taught, and this is very important, does not stray away from emphasizing compassion, community, friendship and other social values.

Among the successful interventions on executive function, one characteristic comes out as essential. The intervention must be increasingly difficult or challenging. Demands must be substantial. My daughter had to do one hundred kung fu monkey jumps to earn her first stripe on her white belt. 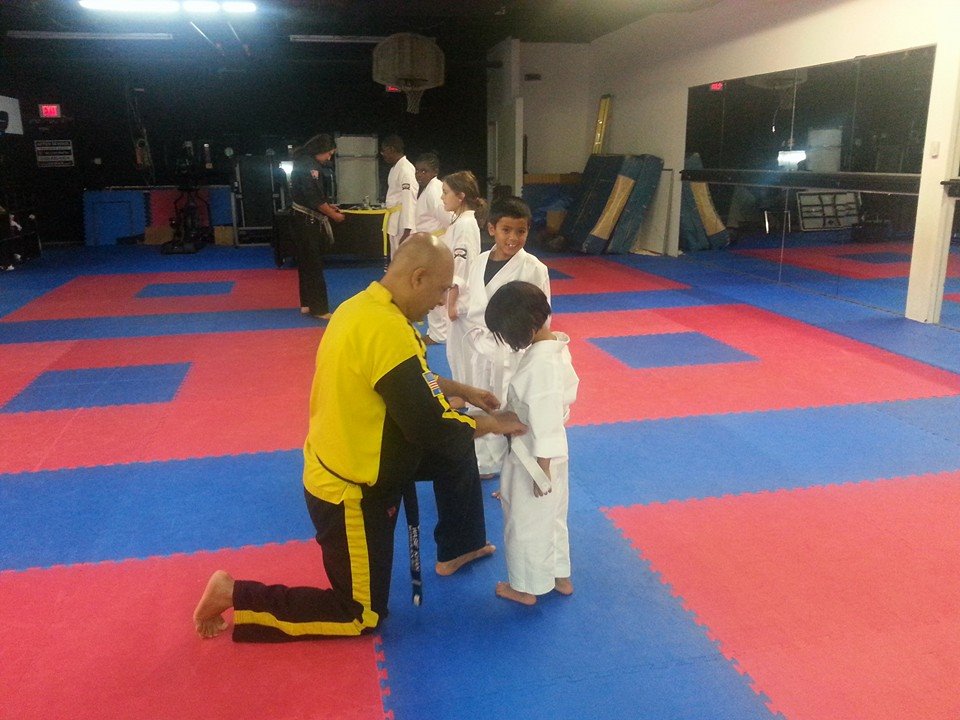 And no doubt, the next stripes or next color would even demand more.

I guess I would see first hand how this works, but it should be clear, however, how much of a role executive function plays in a child growth and development. It is one aspect to which schools must pay close attention. After all, studies have also shown that "Executive function is more important for school readiness than is intelligence quotient (IQ). Executive function continues to predict math and reading competence throughout all school years." The "A+" may be an exaggeration, but "Greatly improved her grades" may not be that far from the truth.