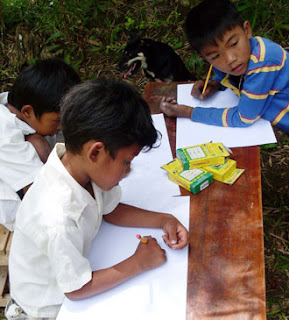 MANILA – Lack of books, chairs, water and toilet facilities once again greeted public school students of school year 2013-2014. While the Department of Education said that the shortages are being addressed for this year, recent reports however belied this.
DepEd Assistant Secretary for Planning Jesus Mateo said shortages in textbooks and classroom seats have been addressed since last year with an expected 1:1 student-textbook and student-seat ratio this year.

But several reports showed schools where classrooms are jam-packed with students; some schools have make-shift classrooms and a class without chairs where students sat on the floor. ACT Teachers’ Party Rep. Antonio Tinio visited schools in Quezon City and found the same old problems.

During Tinio’s early morning visit in some Quezon City public schools as class started last June 3, Monday, they observed that the standard classroom was divided into two, school corridors were converted into makeshift classrooms, some classrooms have no blackboards and chairs, other facilities such as covered courts are converted into classrooms, chairs are still lacking and some students were relegated to the home study program.

At the F.G. Calderon High School in Tondo, Manila, 60 to 80 students are packed in one classroom.

Enrollees in the said school reach up to 3,000 every school year said Louie Zabala, teacher at F.G. Calderon High School and chairman of ACT-Manila. Public schools in Negros Occidental have enough teachers but they lack 784 classrooms. According to a report, provincial school superintendent Juliet Jeruta said they are short by 483 classrooms for kindergarten, 129 for elementary and 172 for high school.

According to France Castro, second nominee of ACT Teachers’ Party, there are only a few applicants for teaching positions in public schools. “Kindergarten teachers are required to specialize in Early Childhood Education, but not all teachers have that specialization,” Castro told Bulatlat.com.

Tinio also noted that the DepEd continues to rely on 35,449 volunteer Kindergarten teachers, 4,828 mobile teachers and ALS coordinators, and 49,530 teachers funded by local governments, majority of whom are paid less than their DepEd-funded counterparts and have no benefits or job security.

Volunteer teachers are receiving an honorarium of only P3,000 to P8,000 ($71.10 to 189.59) a month that sometimes is even delayed.
“The government cannot claim that the shortage in teachers has been addressed when it relies on 89,807 contractual and grossly exploited teachers, who are paid far below the minimum wage with no benefits and no job security.”

Also, Castro said there are teachers who are now applying as call center agents because of the higher salary.

Zabala said the F.G. Calderon High School is the only high school in District 2 of Tondo, Manila. Their area is also near Caloocan City. “So there are also students from Caloocan who are enrolling in our school. There is no other nearby public secondary school within our area,” Zabala told Bulatlat.com, adding that the bulk of their enrollees are graduates of the four elementary schools within the Tondo area that is why the student population in their school continues to grow. “When the slots are already full and we cannot accommodate more students we refer them to other schools,” Zabala said.

“Twenty six years after our Constitution mandated free high school education, the government has not been able to make high school accessible to a substantial number of Filipino children,” Tinio lamented.

Tinio criticized the implementation of the K to 12 program amid the continued failure of the government to address the shortages and lack of access of millions of children to secondary education.

“What is the DepEd doing to enable 4.6 million children to enter high school? Its current intervention, particularly the Alternative Learning System (ALS), is commendable but grossly inadequate, compared to the magnitude of the problem. Currently, ALS serves a mere 300,000 out-of-school children.

Furthermore, there’s no substitute for learning in the classroom setting. Children of the rural poor are as much entitled to quality teachers, classrooms, and textbooks as other Filipinos.”

The solon teacher also pointed out that the failure to provide the poor access to secondary education further worsens social inequality and hinders genuine national development. “If the shortage of public high schools is not addressed, we will see a further widening of the gap in educational attainment among Filipino youth in the urban centers and the countryside, and among the middle and upper income groups and the poor. Our country will not progress until the government assured that every Filipino child finishes high school.”

The teachers’ group is demanding that the government allocates six percent of the country’s Gross Domestic Product (GDP) to education, amounting to P884.6 billion ($20 billion). The group said that to follow the UN standards, the government should allot at least P590 billion ($13 billion) more to basic education. However, the average share of DepEd’s budget from the GDP is only 2.2 percent.

The group also lambasted the increase in the budget of DepEd’s GASTPE (Government Assistance to Students and Teachers to Public Education) program. According to Castro, for this year, the government targets to allocate P7 billion ($165 million) for one million grantees.

Under the GASTPE program is the scheme called Education Service Contracting (ESC). It provides financial assistance to students for the payment of their tuition in private high schools. These students could not be accommodated in public high schools. According to its website, “the program is geared towards reducing the class size to manageable levels in high schools, especially those experiencing shortage of classrooms and teachers.” For this year, grantees in the NCR will receive P10,000 ($236.99) while grantees in the province will receive P5,500 ($130.34) per year.

According to the government website, the management of GASTPE is contracted to the Fund for Assistance to Private Education (FAPE), a perpetual trust fund created by an agreement between the Philippine government and the US government under Executive Order No. 156 series of 1968 to provide assistance to private education in the country. FAPE is chaired by the DepEd Secretary.
“This is the longest form of Public-Private Partnerships in the history of Philippine education system,” Castro said.

Zabala said the GASTPE is not really helpful in decongesting public high schools in the country. In fact, he said, the poorest of the poor are not benefiting from the said program. “The P10,000 worth of grant to students is not enough to cover the one year tuition. It was indicated in the GASTPE program that the remaining balance shall be shouldered by the parent. Only a few families could afford to shoulder the expensive cost of private education,” Zabala told Bulatlat.com.

“The trend is that more and more students are transferring from private to public schools. So why spend more in private education? The government should therefore spend more in the public education. They should follow the UN recommendation to spend its budget amounting to six percent of the GDP to the education system,” Zabala added.