All the Mangyans Want Is for Their Children to Learn


Formed in 2009, Haggibat, the organization of Mangyan tribes, has caused the building of 16 to 18 literacy schools among seven tribes in communities in the uplands of Mindoro. But all their efforts would come to naught if the military would continue to harass them to stop them from organizing against the operations of mining firms.

MANILA — Every opening of the schoolyear, the spotlight is focused on the public school system’s lack of classrooms, books and toilets. Often though, the spotlight misses the school situation of indigenous children. For children of the Mangyan, an indigenous people’s group comprising seven linguistic tribes in Mindoro, school opening is marked by an even more basic set of problem — they do not have schools nearby. 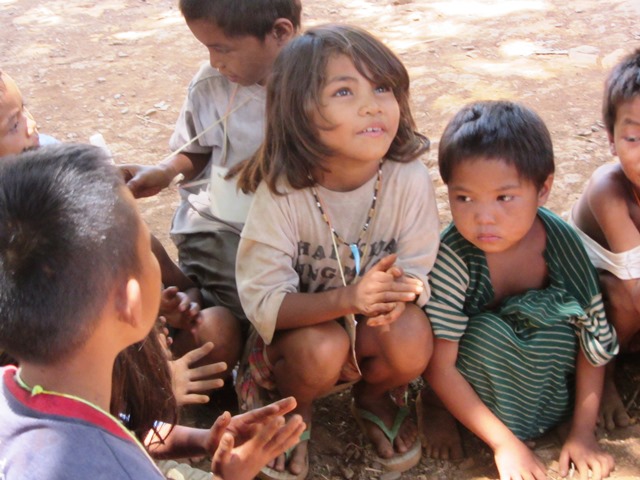 Mangyan children share stories during the Mangyan Day gathering of 7 tribes in Mindoro (Photo by M. Salamat / www.bulatlat.com)
If the lack of classrooms afflicts ordinary Filipino children, Mangyan children who live in far-flung areas frequently do not have formal schools at all, resulting in a far worse illiteracy incidence among the Mangyan. This, in turn, leads to the tribe’s further marginalization.


“Because we’re not too good with reading and counting, we are often short-changed,” Altang Dawseg, 47, leader of the Mangyan’s Bangon tribe in Bongabon, Oriental Mindoro, toldBulatlat.com. His family and many members of his tribe live on planting bananas and taro in the mountains and selling it at their weekly market. They could discern when they are being cheated by lowlanders because the same amount of bananas would be appraised very differently, and weighed differently, too. 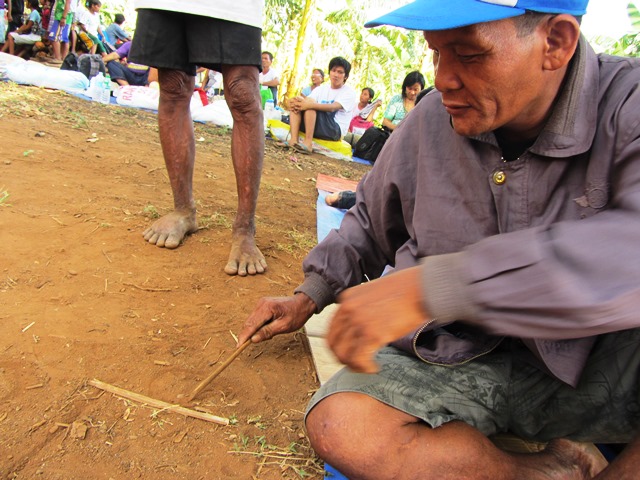 Mangyan leader Altang Dawseg sketches on the ground how a dam being constructed in their village would submerge farms and isolate the upland Mangyan. (Apr 2013 Photo by M. Salamat / www.bulatlat.com)

For many of the Mangyan, becoming literate and numerate is one burning aspiration. “I want to be able to read and write my own name, at least,” said Dawseg.

The desire to help their tribe to learn to read, write and count has compelled organizations of the Mangyan to build their own literacy schools with the help of various groups such as church people and advocates of indigenous people’s rights. For examples, they built schools with the help of the Integrated Development Program for Indigenous Peoples (IDPIP) of the United Church of Christ in the Philippines (UCCP)-Southern Luzon Jurisdiction. These schools are registered under the Department of Education’s non-formal alternative learning system, built by support and cooperation of the Mangyan themselves.

The Haggibat-Mangyan group of Mindoro looks to the building and operation of these schools as among their many achievements. Formed in 2009, Haggibat has caused the building of 16 to 18 literacy schools among seven tribes in communities in the uplands of Mindoro. Teachers in one of these schools told Bulatlat.com that school children who graduate from their schools fare better in public schools. Mangyan children, they said, use to drop out in the first or second year of elementary for failing to catch up and mingle with mainstream students.

Despite the Deped’s recognition though, these schools encounter numerous problems such as the limited budget and children being burdened by hunger or hours’ distance from the school. Worse, the schools are also being subjected to periodic harassment from the military. It also resulted in the closure of some learning centres. Four literacy schools have so far still failed to reopen after the military encamped there in 2012. Before that, the Haggibat had looked to opening more literacy schools to spare their children the long trek to school.

School children not enemies of the state

On October 12 last year, the Mangyans observed Children’s Day by urging Education Secretary Armin Luistro to ask the members of the Armed Forces of the Philippines (AFP) not to encamp in their schools, as provided for by international humanitarian law and the Indigenous Peoples Rights Act of 1997 (IPRA).

But up to now, some tribes still cannot reopen their literacy schools, said Marcelo Carpulan, an Iraya who learned to read and write when he was already an adult. He learned to read on the way to becoming a church pastor. He is the chairman of Haggibat. 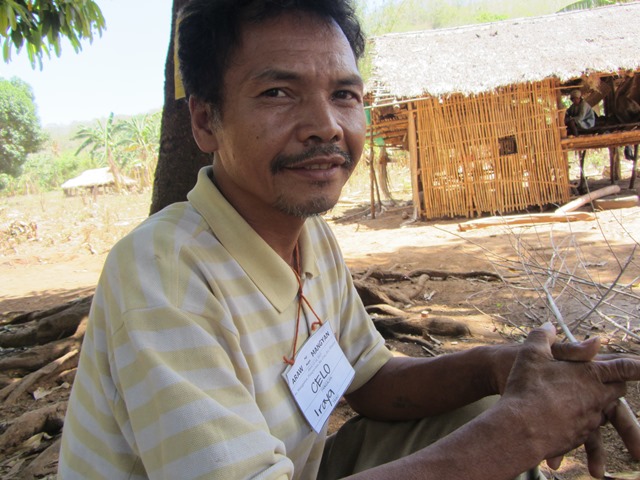 Carpulan said “the military wants us to stop organizing the members of the tribes. They alleged that we are being used by the NPA (New People’s Army).”

Haggibat, since it was formed in 2009, has addressed issues that pose dangers to the life, land and livelihood of the Mangyan. These include the threats posed to their day-to-day life by large-scale mining, dam building, and tourism. Based on their stories of how some soldiers have questioned and threatened them, it would appear that for the AFP, if you oppose the government-approved mining operations, dam construction, etc., it is tantamount to being a member or supporter of the NPA.

The Mangyan accounts sounded similar to the tales of other indigenous peoples in other parts of the country. Lit-num schools of indigenous peoples in Mindanao and the Cordillera were alsoused as military camps in the past years, forcing some of these schools to close, and driving some tribe members to evacuate.

Among the seven tribes of Mangyan, members of one tribe, the Bangon tribe, were reportedly forced to abandon their community including the lit-num school in it last year.

Haggibat, said its secretary-general Amit Gabriel, has also addressed their tribes’ persistent lack of social services such as health and education. But apparently, if you address this and the government’s failings at addressing this became more obvious, you also run the risk of being branded an NPA. Leaders of Haggibat found this the hard way in the past years, as they themselves become subject to military surveillance and harassment. Unfortunately, so did their literacy school teachers and students.

Haggibat leaders told Bulatlat.com that they exerted so many efforts to recruit “para-teachers” to conduct their literacy program in Mangyan communities. They also strive to enlist the help of foundations, schools and universities, even the church, to help in their literacy effort.

These efforts resulted in the formation of 18 literacy schools. But of these, those in the communities of Buhid, Iraya (in Paluan), Bangon and Hanunuo have remained closed until this summer after the military visited and some set up camp there last year.

Carpulan said the literacy school of the Alangan tribe also stopped for a while because supplies failed to reach them as the military was patrolling in the vicinity and checking everything that they brought into their community.

As schools open “this June, we are trying to do our best to explain to them and to the teachers that they shouldn’t be afraid. We’re doing our best to reopen and continue with the literacy program. It is because of these efforts of Haggibat that they managed to reopen and continue the operations of at least 12 of the literacy schools.
Carpulan shared that the literacy school of the Bangon tribe will no longer be reopened as the tribe has left their community including the said school. He said the military stopped their school-basing and encampment in Mangyan village halls in Nov 2012 but they continued operating nearby.

Carpulan said the military seems bent to making their presence felt among the Mangyan communities as long as the mining claims of large companies are being imposed on the area. He explained that the military are deployed in the area to protect and enforce these mining claims.

“The military keep on returning to our communities because they want to watch over us and our movement because our local government has already passed a resolution against mining, and they’re also keeping us from rising up against these mining operations.


Commentaries Education for All News Views from Regions