“We have pointed out even before that the government should address the shortages first before they throw money into the implementation of the K to 12 curriculum. It is like wasting money while nothing is being solved.” – France Castro, Master Teacher in Mathematics and ACT Teachers’ Party second nominee. 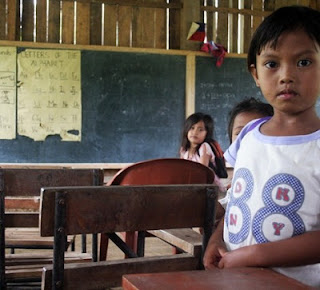 MANILA – The Department of Education is implementing the second phase of the K to 12 curriculum in grades two and eight or second year high school for the academic year 2013-2014. However, France Castro, second nominee of the ACT Teachers’ Party and a Master Teacher in Mathematics said the problems identified in last year’s implementation of the new curriculum have not yet been addressed.

“Teachers who attended the recent training said there is still no teaching module for grades two and eight. Modules for grades one and seven, which were implemented last year, are not yet complete,” Castro told Bulatlat.com.

“It is much like going to war without weapons,” said Castro referring to the incomplete modules and textbooks for the implementation of the K to 12 program. “There is nothing new, really, as we said before, the implementation was in haste. There are not enough materials to use, and if there is, it is insufficient; not all affected teachers have their own copies,” Castro said adding that the burden to reproduce the modules is left to the teachers. Teachers also had to improvise because there are no teaching guides and modules for grades one and seven last year. Now, Castro said, teachers are facing the same problems.

The K to 12 program is the flagship program of the government of President Benigno S. Aquino III. It initially implemented the first phase of the program for grades one and seven last school year 2012-2013, while the Universal Kindergarten was implemented earlier in school year 2011-2012. The implementation was started even before the K to 12 Act or RA 10533, the Enhance Basic Education Act of 2013 was signed into law by Aquino recently.
“Naninindigan pa rin po tayo sa ipinangako nating pagbabago sa edukasyon: ang gawing itong sentral na estratihiya sa pamumuhunan sa pinakamahalaga nating yaman: ang mamamayang Pilipino. Sa K to 12, tiwala tayong mabibigyan-lakas si Juan dela Cruz upang mapaunlad – hindi lamang ang kanyang sarili at pamilya – kundi maging ang buong bansa,” (We are still true to our promise to implement changes in the education system. Central to this strategy is our investment in our most important resource: the Filipino people. With the K to 12 program, we are confident that we could equip Juan de la Cruz to develop not only himself and his family but the whole country as well.) the President said in his speech during the launching of the K to 12 program in April last year.

But progressive groups are not convinced. They have pointed out, even before the Universal Kindergarten was implemented, that the so-called ‘education reform’ of the Aquino government would not solve the perennial problems of the education system in the Philippines.

“We have pointed out even before that the government should address the shortages first before they throw money into the implementation of the K to 12 curriculum. It is like wasting money while nothing is being solved,” Castro told Bulatlat.com.

No evaluation after one year of implementation

According to a paper on the education system produced by the Kabataan Party, the government is not ready to implement the K to 12 program. “With RA 10533 signed into law, basic education institutions will be compelled to follow the new program, despite the fact that there has been no concrete scientific evaluation of the program’s efficiency and effectiveness after its first year of implementation. In fact, the curriculums for grades two and eight have just been completed and will be haphazardly implemented this school year without any proper assessment.”

Same as last year, teachers interviewed by Bulatlat.com said the curriculum for the whole school year 2012-2013 has yet to be finished.

Castro said their office received numerous reports regarding this. “In Cagayan Valley province, for one, their mother language is Ibanag; teachers, therefore, teach subjects using the Ibanag language. By the second semester, they shift to English so the children are getting confused.”

Louie Zabala, third year Social Studies teacher at the F.G. Calderon High School in Manila and president of ACT-Manila said for as long as the needed materials to teach the K to 12 curriculum, such as modules and other learning materials, are not complete then the objective to produce more competent students is futile.

“Last year when the K to 12 curriculum was first implemented in grade seven, teachers were confused on how to teach using the new curriculum. The modules were distributed late, and when it arrived the copies were insufficient. The teachers have to shell out their own money so that they can have their own copies,” Zabala said in an interview with Bulatlat.com. He said the modules arrived by the second half of the school year, and by the end of the school year, the modules for the whole school year were still incomplete.

Zabala also said the training of teachers for grade eight is also too short. “The teachers undergo training for one week and there are not enough reference materials. How could a teacher effectively teach the new curriculum using limited materials?”

“That is why,” Zabala said, “no matter how much the government tries to show that it is instituting reforms in the education system, the same old problems greet students every school year and it is even getting worse.”

“The solution of the government would always be not suitable or applicable to the existing problems for as long as the major stakeholders – the teachers, the students, and the parents – are not involved in planning and implementing such reforms. And as we have said before, the government would have to address the fundamental needs of our education system. It’s much like, before students learn about cosine or algebra or algorithm they would have to learn the basics of arithmetic first,” Zabala added.

“The K-12 scenario bodes ill for millions of basic education students, as it adds more burdens while ignoring the chronic crisis in the country’s basic education system,” Kabataan Party-list said.

According to www.gov.ph/k-12/, “Senior High School is two years of specialized upper secondary education; students may choose their specialization based on aptitude, interests, and school capacity. The choice of career track will define the content of the subjects a student will take in grades 11 and 12. The SHS subjects fall under either the core curriculum or specific tracks.”

Grades 11 and 12 students can choose from technical-vocational-livelihood; academic; sports and arts. According to DepEd, after finishing a technical-vocational-livelihood track in grade 12, a student may obtain a National Certificate Level II (NC II), provided he/she passes the competency-based assessment of the Technical Education and Skills Development Authority (TESDA). The NC I or Certificate of Competency (COC) is obtained after students graduate from grade 10.

“The NC II improves the employability of graduates in fields like Agriculture, Electronics and Trade,” the government website read.
“That is the main objective of the K to 12 program: to produce semi-skilled workers for the country’s supply of cheap and docile labor. At the age of 17 or 18, the youth would already be peddled to multinational companies. Where do semi-skilled workers go? To factories, to big foreign companies where they work as slave labor,” said Zabala.

Zabala added that with the worsening unemployment situation in the Philippines, graduating from grade 12 is no guarantee that one would land a job.

Meanwhile, Kabataan Party-list said, the Philippines, which has a predominantly young population, has the highest overall unemployment rate in East Asia and the Pacific Region. It also has the highest youth unemployment rate, according to a 2003 study by the World Bank. “Young Filipinos are twice as likely to be unemployed than those in older age groups. This condition was further worsened when the economic recession kicked in because of massive retrenchment and lay-offs.”

Therefore, the group said, the K to 12 program is designed to reinforce the production of cheap semi-skilled labor for foreign needs. “The current proposal adopted by neoliberal pro-globalization die-hards aims to meet standards for ‘global competitiveness’ and demands of the ‘international labor market for semi-skilled labor.’”
Kabataan Party-list said the K to 12 intends to strengthen the colonial orientation of Philippine education: to serve the cheap labor needs of foreign capital and businesses. “Our education system must have a pro-Filipino orientation and must serve the needs of our nation and people.”

Zabala added, “What we need to produce are more professionals or scientists who will help us industrialize the country. We don’t need the K to 12 program that intends merely to produce semi-skilled workers for exploitation by multinational companies, which profit from our cheap labor.”