June 05, 2013
Incorrect prioritization not only leads to lost opportunities but also long term consequences. In every year that real problems are ignored, these not only linger, but also worsen. With lower infant mortality rates and higher fertility, the population of a country becomes relatively young. With this scenario, the future can indeed be bright with more productive citizens in the coming years. This demographic dividend, however, will fail to materialize if the necessary actions are not taken now. Each year adds to the age of a child. This can not be postponed simply because policies of public education and social welfare are not working. Failure in this regard has effects that can not be erased. Children who fall behind on important milestones in their physical development face long term impacts that are permanent and can not be rectified.

A new report from Save the Children published in May 2013, "Food for Thought: Tackling child malnutrition to unlock potential and boost prosperity", presents evidence that highlight the significance of the 1000-day window of pregnancy through early childhood. The report has the following infographic summarizing its major findings:

The effects of malnutrition in the womb and during the early childhood years are long lasting because this period coincides with a child's brain growth and development. The ramifications seen when a child is eight years old go beyond socio-economic background and quality of school. Children who were malnourished during their early years:
There is a limited window of opportunity to reverse the problem, as shown in the following figure: 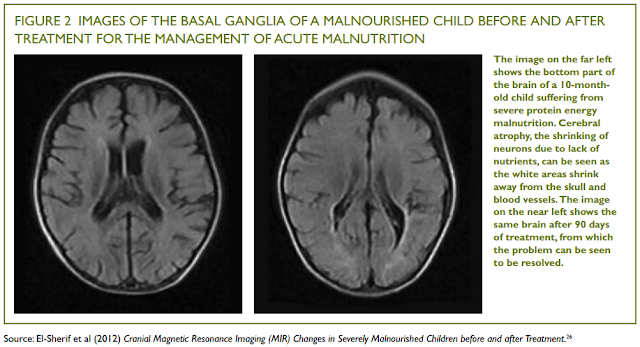 One must keep in mind, however, that the window of opportunity to resolve the problem is limited. Priorities.... Food for thought....

Data and Statistics Suggestions to Solve Problems in Basic Education