The schools of the Mangyans have to deal with shortages, water being cut off during heavy rains, and harassments from the military. But they persist and are even planning to expand. 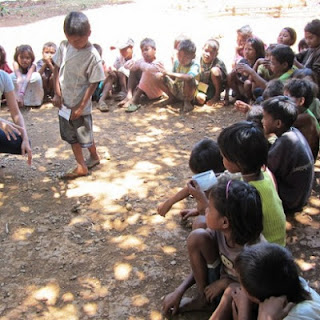 Read also: All the Mangyans want is for their children to learn
By MARYA SALAMAT
Bulatlat.com
7 June 2013

MANILA – Edgar Banaw, 25, a Hanunuo-Mangyan, has been teaching at the literacy school of their community in Sitio Gaang, village of Panatayan, Mansalay, Mindoro. He is called a “para-teacher,” as he is not a licensed teacher under the Professional Regulatory Commission. But for five years now, he has been teaching Mangyan children in their sitio or sub-village the “nine basic lines, the Filipino alphabet, numeracy and literacy.” Banaw was encouraged to teach by fellow Hanunuo and pioneer lit-num teacher in Mansalay, Ernie Uybad. Two years older than Banaw, Uybad first taught Mangyan children and even elders to read and write in 2007.
Uybad first taught in another sitio after talking with Mangyan leaders, and then he became a volunteer-teacher under the Integrated Development Program for Indigenous Peoples (IDPIP) of the United Church of Christ in the Philippines (UCCP)-Southern Luzon Jurisdiction. He took seminars on teaching and school administration. He trained other Mangyans to become teachers and one of them is Banaw. 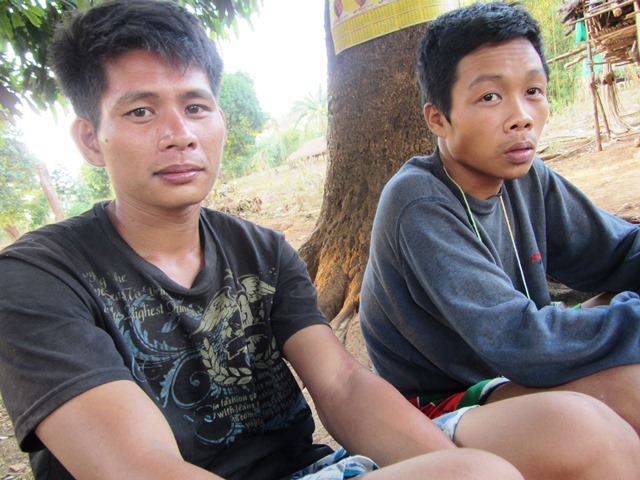 Hanunuo Mangyan teachers share teaching challenges, aspirations (Photo by M. Salamat / Mangyan Day 2013 / www.bulatlat.com)
Shy and soft-spoken, Banaw describes his pupils, the children as energetic, sometimes to the point that classes are disrupted. But if he has any problem with the children, he said, he just talks to the parents. The problem is usually acted upon immediately.


Literacy-numeracy schools like the one where Banaw teaches regularly hold meetings with parents to discuss the development of their children. In these meetings, the parents ask them how their kids are doing.

They conduct classes under the trees. Banaw said they have a school classroom, but sometimes, he said, under the tree is just as good as any place to teach the children the nine basic lines, reading and writing.

He said they hold classes only on Mondays and Tuesdays every week, because the schoolhouse is far from where some of the children live. Young students have to start walking at 5 a.m. just to get to the school at 7 a.m., Banaw said. It is not that the school is in a different sitio, he said. It is just that for some of their students, there is no straight, easy route to the school. The children have to trek up and down the safer side of the mountain to get to their school.

The students’ ages range from 5 to 12 years old, Banaw said. There are also the occasional elders who wanted to learn to sign their own name, at least.

Given the relatively wide age range of students in his class, how does he teach them? Banaw replied that it is not really difficult, though he admitted that teaching older persons, especially those older than him, can sometimes be more trying. 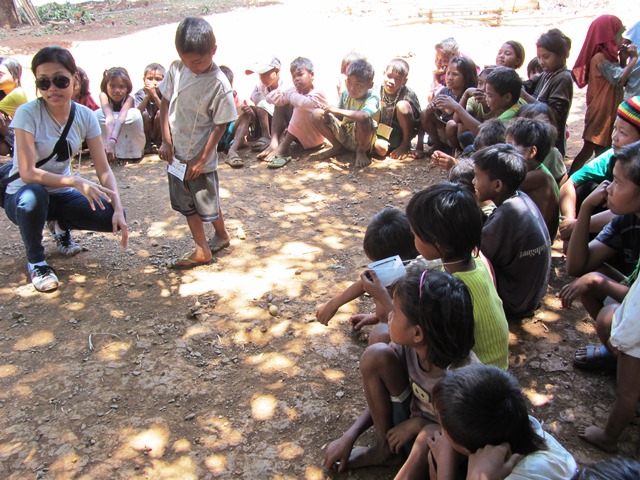 Mangyan children’s storytelling under the tree (Photo by M. Salamat / Mangyan Day 2013 / www.bulatlat.com)
“Teaching older persons is harder. You give them a separate set of stories and instructions. They don’t always follow the instructions. Besides, they have more distractions. They have a lot of work to do.”

Aya Andig, 22, another Hanunuo-Mangyan para-teacher in a different sitio of Panatayan village in Mansalay, Mindoro, told Bulatlat.com that they also have older students who want to learn to at least write and sign their own name. But the older ones find it difficult to focus on their lessons.

Older persons, he said, seem to find it harder to learn the basic lessons. Some just give up in the end and go home or go to their work.

Aside from the periodic visits and questioning by the military, Mangyan literacy schools regularly grapple with the problem of lack of higher education to give to their older students. Once their students graduate from the literacy schools, the next step is to enter the elementary or high school system. However, these schools are often situated farther from their communities.

In fact, even their literacy schools can already prove a challenge to their students, given that their makeshift houses are scattered up in the mountains, where they live by farming and hunting.
Banaw and Andig said parents find it hard to send their children even to their literacy school because they have no food to send to their kids when they leave the house.

Their school’s source of water is sometimes cut off, especially during typhoons and hard rains. Mangyan communities source their water from springs in the mountains. They connect a hose from the spring to the community schoolhouse. When rains come down the mountain though, the spring water could be contaminated and they would not have clean water for days. Sometimes, as what happened to Edgar Banaw’s lit-num (literacy-numeracy) school, they have no money to replace a damaged hose, even if it costs less than a thousand pesos. Though their houses may be in the mountains, Banaw said, they also suffer from floods and flashfloods. 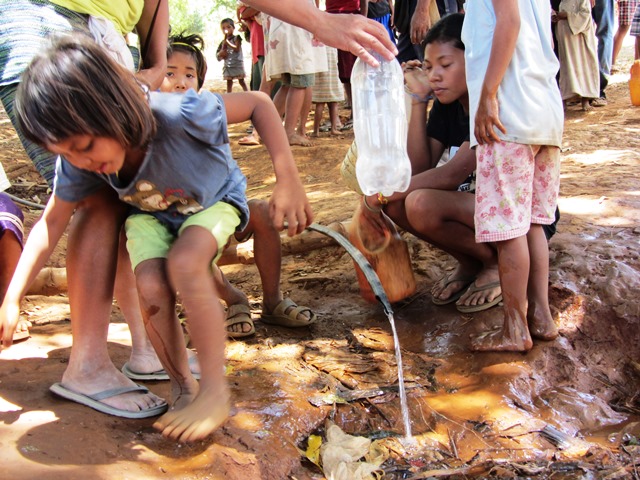 Mangyan communities source water from mountain springs (Photo by M. Salamat / Mangyan Day 2013 / www.bulatlat.com)
Like other Mangyans, Banaw and Andig also work the fields planting bananas and other root crops. These are what they regularly eat. They have rice only when they have money. And they earn money only when they sell their bananas or root crops at the weekly market.

The two para-teachers said that like other Mangyans living in far-flung communities, they also experience harassment from the military. They told Bulatlat.com that the women especially feel threatened, when soldiers ask them the whereabouts of the New Peoples’ Army as they make their way to the field. Almost every three years, the para-teachers recall instances when the women could not venture out of their community to work at their field for fear of the military.

At least, their lit-num schools have continued operating. Four others have remained closed after last year’s intensive military operations, the Haggibat leaders said during their annual Mangyan Day, held every April since 2008. They are still working to reopen their abandoned lit-num schools, and to open new ones in other Mangyan communities, so the children won’t have to trek two hours just to get to the school.