The Failure of Market-Oriented Education Reforms in the US

May 21, 2013
Reform measures, such as teacher evaluations based on students' test scores, closures of low-performing schools, and school choice by increased access to charter schools, are the major market-oriented changes in K-12 education in the United States. Examining the learning outcomes of students in schools in Chicago, New York City and the District of Columbia, cities that have implemented these reforms, shows no significant positive impact from these market-oriented measures. This is the conclusion of a recent study by Elaine Weiss and Don Long. The study, "Market-oriented education reforms’ rhetoric trumps reality", has the following key findings:


KEY FINDINGS
The reforms deliver few benefits and in some cases harm the students they purport to help, while drawing attention and resources away from policies with real promise to address poverty-related barriers to school success:


The following are infographics, each addressing one aspect of market-oriented education reforms:

The first two paragraphs of the study's conclusion are as follows: 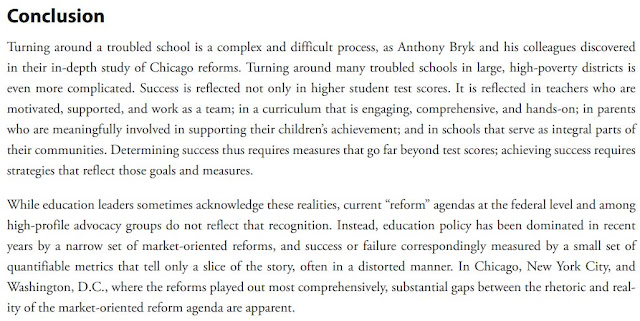 Jason Stanford, after referring to this study, wrote on the Huffington Post, "Time to Stop Waiting for Superman. Stanford concludes:


"There was no DC miracle. Browbeating students and teachers into raising scores on state tests only makes them better at taking state tests, and reforming our schools in hopes of replicating an illusion is a petty crime against humanity. Even George W. Bush was forced to admit there were no weapons of mass destruction in Iraq, and we've long since gotten over the shock that Barry Bonds and Mark McGuire were juiced more than a Florida orange grove. We believe lies at our own peril. It's time to stop waiting for Superman and focus on the hard work of teaching our children the way we know works."