May 12, 2013
The executive functions of the brain include paying attention, planning, organizing, and drawing strategies. Switching tasks not only include the ability to remember and follow a rule, but also an effort to ignore that rule when it is necessary, and the flexibility to act on a different instruction. These are mental processes that are obviously necessary for multitasking. Imagine being in front of a crowd and suddenly an incident occurs - there is likely a difference between how the crowd reacts if one says, "Please remain calm" or "Please do not panic". With a child who keeps moving his or her head during a haircut session, what does one say, "Sit still" or "Stop moving"? Even in these cases where the two possible instructions are in fact the same, the response can be shaped by how the instruction is worded simply because the task being asked requires a change. Which version works better depends on the executive functions of the brain. One may pay more attention to the actual task at hand and therefore needs to be prompted additionally that things have changed, while some may pay more attention to the change in the task, and for this case, it does not require additional prompting. In both cases, there is time and working memory required. And, of course, in both cases there is a possibility of whether the task is correctly executed or not.

Psychologists have been employing tests to measure both speed and accuracy in switching tasks. Such tests can be as simple as looking at simple figures like the ones drawn below:

One of the four figures can be shown to an individual, a red square, a red triangle, a green circle, or a green triangle. There are four possible responses with two assignable tasks: give the shape or give the color. In these simple tests, an individual's response time to the task required and the accuracy of the response can be measured while one goes through the four different stimuli as well as the two different tasks. With tests like these, it has been shown, for example, that bilinguals can switch tasks faster than monolinguals (See "Bilingual Children Switch Tasks Faster Than Speakers of a Single Language", for example). The difference, however, is only with time. The accuracy of responses appears to be the same for both groups.

A recent study explores the difference between young children and adults. In this work, the test is slightly modified by adding transition cues to alert the individual if the next task will be the same or different from the previous one. The paper describing this new study is published in the journal Cognition: "Qualitative change in executive control during childhood and adulthood". 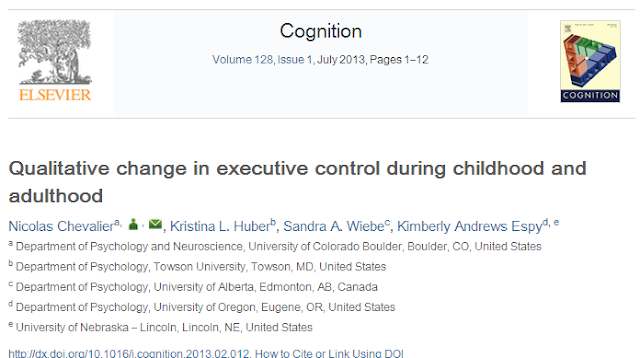 Executive control development typically has been conceptualized to result from quantitative changes in the efficiency of the underlying processes. In contrast, the present study addressed the possibility of qualitative change with age by examining how children and adults detect task switches. Participants in three age groups (5- and 10-year-old children, young adults) completed two conditions of a cued task-switching paradigm where task cues were presented either in isolation or in conjunction with transition cues. Five-year-olds performed better with transition cues, whereas the reverse effect was observed at age 10 and with adults. Unlike 5-year-olds who detect switches after semantically processing cues, older participants strategically detect switches based on perceptual processing only. Age-related qualitative changes promote increasingly optimal adjustment of executive resources with age.


The observed difference between young children and adults is remarkable. On one hand, it is not surprising that young children benefit from additional prompting. Transition cues which alert a child that the required task is about to change are perhaps expected to help young children. Anyone who has been taking care of a young child probably would say that no one needs this controlled study to arrive at such a conclusion that should be quite obvious. What is remarkable, however, is that with transition cues, adults and ten-year-olds perform badly. With the additional help, adults actually make more mistakes. Transition cues seem distracting.

The above results definitely indicate that the brain not only develops in quantitative terms, but also in qualitative aspects. The fact that prompting helps at a younger age and harms adults shows that the brain is changing strategies with age. Children pay close attention to instructions, word for word. Adults, on the other hand, are already relying on perception. Additional details seem to only confuse.

We often wonder why it seems that children can learn languages more efficiently than adults do. And at the same time, as adults, we despise drills and rote learning while young children do not. I think in all of these, we need some pause and make ourselves aware that an adult brain may not just be more mature than a child's brain. The executive functions may actually be working entirely differently.