Spiral Curriculum: When and How? Redundant versus Progressive?

May 25, 2013
Republic Act 10533 of the Philippines, otherwise known as the "Enhanced Basic Education Act of 2013", not only adds two years to basic education and reiterates universal kindergarten, but also prescribes the standards and guidelines the Department of Education must follow in developing curriculum. One item under this prescription is:


"The curriculum shall use the spiral progression approach to ensure mastery of knowledge and skills after each level."

The following is an example taken from a presentation given by Merle Tan, illustrating how chemistry is integrated into the new DepEd K+12 curriculum: 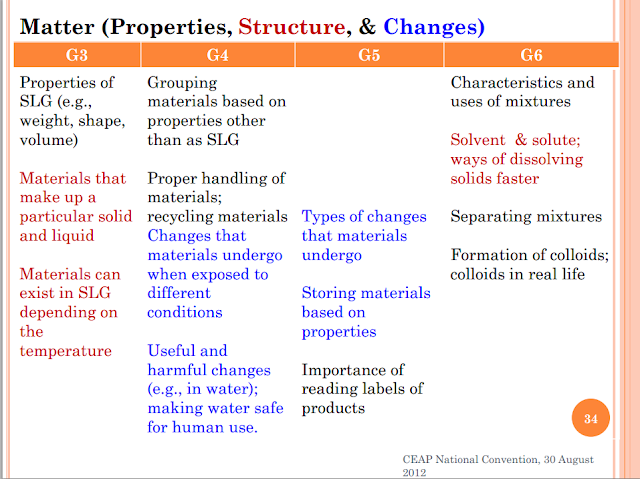 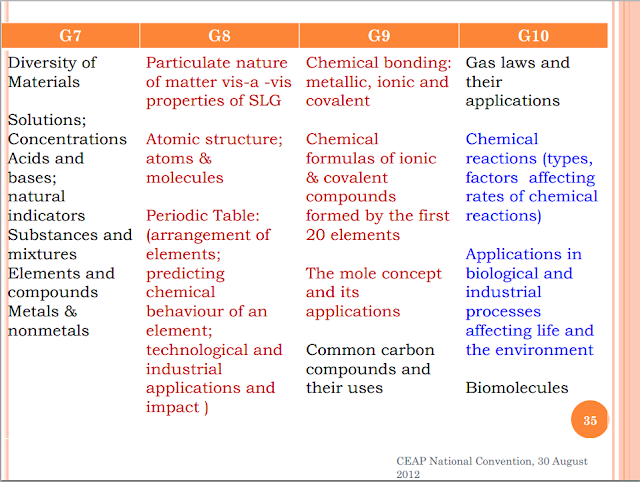 In the same presentation, it is also mentioned that "Science curriculum framework of high performing countries (Australia, Brunei, England, Finland, Japan, Taiwan, Thailand, Singapore, New Zealand, USA (3 states)) follow a spiral progression and integrated approach at least up to G9". The presentation, however, fails to cite that in Singapore, for example, "Teachers for early grades are trained and teach in either math and science or in languages and social studies, not all subjects." (Schools in Singapore may provide lessons for educators here, Cleveland.com). The presentation also does not mention the following observation highlighted by the US National Science Board's Science and Engineering Indicators 2002:


Analyses conducted in conjunction with TIMSS (Schmidt, McKnight, and Raizen 1997) documented that curriculum guides in the United States include more topics than is the international norm. Most other countries focus on a limited number of topics, and each topic is generally completed before a new one is introduced. In contrast, U.S. curriculums follow a "spiral" approach: topics are introduced in an elemental form in the early grades, then elaborated and extended in subsequent grades. One result of this is that U.S. curriculums are quite repetitive, because the same topic appears and reappears at several different grades. Another result is that topics are not presented in any great depth, giving the U.S. curriculum the appearance of being unfocused and shallow.

The above is summarized in the following figure:

The spiral curriculum is in fact viewed as one of the problems of basic education in the United States. This is likewise emphasized in a study on curriculum coherence (J. CURRICULUM STUDIES, 2005, VOL. 37, NO. 5, 525–559) where the following table (for the physical sciences), illustrating coherence in curriculum in the top performing countries (Singapore, the Czech Republic, Japan, and Korea) and the lack thereof in the United States, is presented: 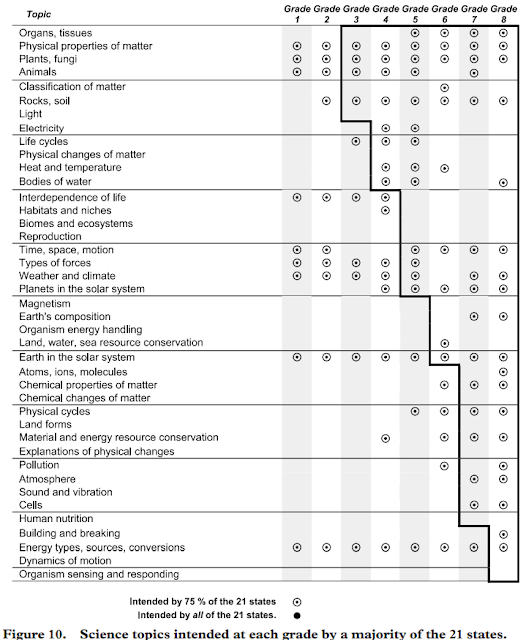 To understand the very important yet subtle considerations behind designing a spiral curriculum, excerpts from the following book by Cathy Seeley may be of assistance: 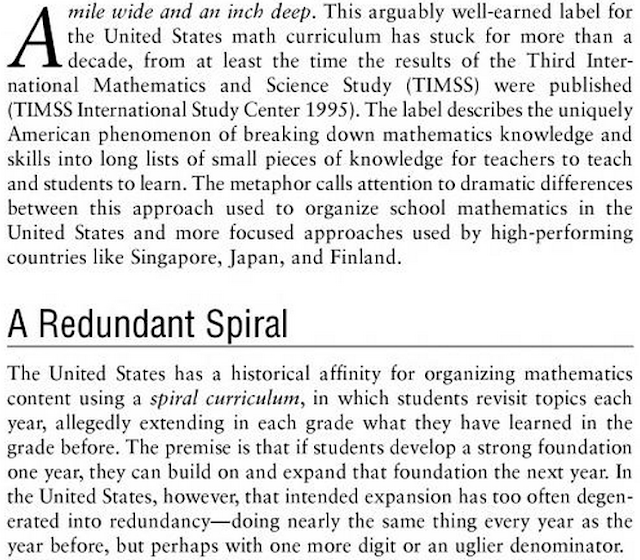 Spiral curriculum, when and how? These are in fact very important questions which can easily decide whether a curriculum will succeed or fail. First, for most countries including the top performing ones, the spiral curriculum is only applied up to middle school (Grade 8). The international exam, TIMSS, is given to students in Grades 4 and 8. Students from the US are only average among developed countries in the Grade 8 exam, suggesting that problems lie mainly in the later elementary years and middle school. In the top performing countries, the foundations of physics (forces, time, space and motion) are first introduced in Grade 5, while the fundamental building blocks of chemical knowledge (atoms, molecules and ions) are taught in Grade 7.  Although these topics are likewise covered in the US curriculum, a little bit about everything is also presented to children during these years. The US curriculum is quite diffused. The top performing countries pay attention to coherence in the curriculum. Perhaps, this is the reasoning behind less breadth. These countries choose to emphasize instead depth in the foundations of these science disciplines. Along this line, the sequence is very important. Chemistry is taught first with atoms, molecules and ions. This is one major characteristic that is lacking in the Philippines' DepEd K+12 curriculum.

Another significant difference between the science curriculum in DepEd's K+12 and those of the top performing countries is the obvious fact that the Philippines curriculum is two years behind. The integrated science approach adopted by the US and other countries stops at the end of middle school (Grade 8) while the Philippines expects to achieve this only at the end of Grade 10.

These differences between curricula of countries, however big, may still not be the explanation behind student learning outcomes. Human learning requires steps. We learn to walk before we run. Coherence in curriculum is therefore a must. Coherence in a curriculum can be a given with instructors who are specialized to teach a particular subject. A teacher who has an education degree specializing in chemistry, with or without a curriculum, would know what to teach first. This, in fact, is one major difference between teachers in Singapore and those in the United States. Teachers in Singapore, even in the elementary years, are subject experts. Teaching science in an integrated approach requires specific training. Drawing a curriculum that recognizes the hierarchical nature of topics within a discipline not only provides the conditions helpful to learning, but also facilitates the required teaching abilities. A spiral curriculum that deals with a mile wide range of topics on various disciplines requires too much from any teacher. A spiral progression approach must consider the resources available. There is no point in introducing a curriculum that cannot be possibly implemented correctly. There is wisdom in "Less is More"....