May 15, 2013
"DepEd K to 12: Teaching Math and Science" is one of the most viewed articles in this blog. There is no doubt that educators around the world are examining basic education in the math and the sciences. Both math and science are seen as central to the 21st century. Some studies now even focus on demonstrating how learning in math and the sciences can facilitate education in other disciplines. Unfortunately, there are countries that are currently struggling in math and science education, and are continuing to fail in grasping the fundamental problems plaguing their educational system. Instead of identifying what the real problems are, these countries venture into various hypotheses that have not been validated by data. Recently, I received a comment that claims that one reason why children in the Philippines are not doing well in math and science is that these subjects have been taught in a foreign language. One simply has to cross the South China Sea to see an example that repudiates this claim. That example is Singapore:
Singapore not only ranks high in international standardized exams, the country is also among those with the lowest fraction of students performing below the "Low" benchmark of performance:

Table 1. Proportion of Students Below the “Low” Benchmark in 2011
Table downloaded from a press release of the Ministry of Education, Singapore

Yet, the medium of instruction for math and the sciences in Singapore is not the mother tongue, but English. Outside Singapore is the country of Malaysia. Malaysia, like the Philippines, is facing problems in math and science education. The Malaysian Insider reports:

"...64 per cent and 66 per cent of Malaysia’s secondary students who had participated in the TIMSS study scored “Low” and “Below Low” in mathematics and science respectively...."

Similar to the Philippines, the medium of instruction has also been used as a scapegoat. Malaysia likewise has been experimenting on which language should be used as medium of instruction for math and the sciences. Over the years, policies seem to easily shift without careful research or gathering of evidence. And if there is evidence, there is no guarantee that the government would actually listen to research. In 2010, the following paper was published in the Journal of Science and Mathematics, Education in Southeast Asia: 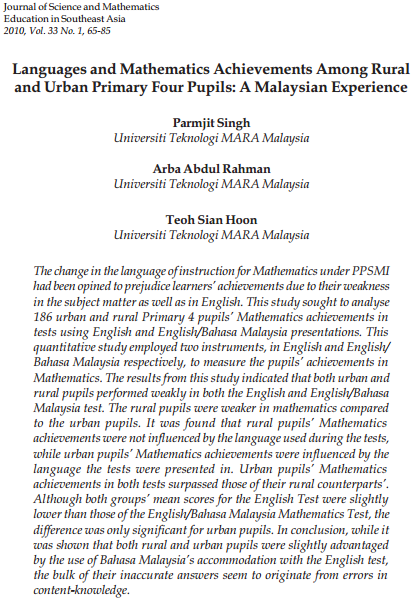 The authors of the above paper conclude:

"The differences in their achievements highlight an important matter – the inaccuracy of the accusation that English as the medium of instruction in mathematics is the cause of the pupils’ less than ideal achievements in the said subject. This is because both groups of pupils were weak in content knowledge as evidenced by their low mean scores in both tests. Noteworthy as well was the fact that learners from the rural area were not significantly handicapped by the said language in their mathematics achievements. As for the urban pupils, while it was shown that they were slightly advantaged by the use of Bahasa Malaysia’s accommodation, the bulk of their inaccurate answers seem to originate from errors in content-knowledge. To reiterate a point made earlier, the pupils’ lower scores in the English Test should not summarily be assigned to the use of the English language as the medium of instruction alone. It is important to acknowledge that mathematical acumen also has a role to play in determining the pupils’ achievements in the said subject."


The difference between Singapore and Malaysia in math and science education is huge. More than 95% of Singapore children pass international exams in math and science. On the other hand, only about a third (34-36%) of Malaysian students pass. As the authors correctly state, perhaps, it is about time that we ask ourselves if we are in fact teaching students mathematics and the sciences. I actually do not think it is a wild guess that the problems lie in content teaching.