Public School Teachers in the Philippines are Either Forgetful or Stupid?

May 08, 2013
The title of this article was drawn from a comment made by an election officer in Davao City as reported by the  social news network Rappler. The election officer did not specifically refer to public school teachers but to Board of Election Inspectors (BEIs):


DAVAO CITY, Philippines - Board of election inspectors who experienced difficulties operating precinct count optical scan (PCOS) machines during the final testing and sealing (FTS) on Monday, May 6, must be questioned, a city election officer suggested.

"It's either they are forgetful or they are stupid," said Atty. Aimee Perolino-Ampoloquio, Davao City election officer. She explained that the BEIs were given proper training (including refresher courses) to ensure that they are fully capable of facilitating the elections.

To the readers of this blog who are not familiar with elections in the Philippines and the role played by public school teachers, the following is important to take note (Taken from the Facebook page of the Alliance of Concerned Teachers):


Alliance of Concerned Teachers (ACT) major concerns regarding the coming elections on May, 2013:

1.One of our major concerns is the enactment of a law that would make election service on the part of the public school teacher voluntary. As per mandate of the Omnibus Election Code, our public school teachers are required to serve in all elections. House Bill has been filed in the House of Representatives by Congressman Antonio Tinio of the ACT Teachers Party List.

3.We also reiterate our major concern regarding the disenfranchisement of our public school teachers who served as Board of Election Inspectors. Because of the computerized elections which limited the number of ballots to the list of voters listed in specific precincts, our public school teachers who are registered in other precincts were not able to exercise their right of suffrage. This time we request that COMELEC allow them to vote in the respective precincts where they serve as BEI’s by issuing a resolution to that effect and making the necessary adjustments to this specific situation.

4.Allow our ACT Teachers Hotline to work in close coordination with you especially during emergency situations when the safety and lives of our public school teachers, principals and non-teaching personnel, who will serve in the coming elections, are at stake.

Public school teachers in the Philippines serve as Board of Election Inspectors. This should explain then the title of this article. Elections are coming soon and this one comes with scan machines, which, as noted by the Rappler report, have their own share of problems:


Redemptor Banayo, PCOS technician assigned at the school, explained that it is "normal" for the machines to shut down after experiencing thermal printer issues. "In fact, during our training, our machines shut down repeatedly. I think this is understandable because these machines were stored and unused for years," he said.

Banayo said there were also instances where the machine's application froze while being used.

This definitely works against placing a high regard for the teaching profession in the Philippines especially when the machines are at fault.

These all look and sound different from what we have here in the US. Some public schools are indeed used as polling places in some states, but in Virginia, for example, we do not have public school teachers serving as election inspectors. But this is not the only major difference. There is more.

The Commission on Election (COMELEC) shall tally all the votes for the parties, organizations, or coalitions on a nationwide basis, rank them according to the number of votes received and allocate party-list representatives proportionately according to the percentage of votes obtained by each party, organization, or coalition as against the total nationwide votes cast for the party-list system.

Thus, within the lower house of Congress, there are representatives that are to be elected nationwide, not simply by a district. Party list representatives can take as much as 57 seats out of the 286 positions in the lower house. The wisdom behind this party-list representation is to give voice to those who are underrepresented by major political parties in the country. Browsing through the various party lists provides insights on what Philippine politics is really about. Here are some of the party lists running for seats in Congress:


Teddy Casiño, who is vying for a seat in the upper house belongs to a coalition of party lists called Makabayan. From Wikipedia:

In a previous post on this blog, "This Is A Sad Day For Philippine Basic Education", it was mentioned that the seating members in Congress who belong to this coalition voted against DepEd's K to 12 bill: 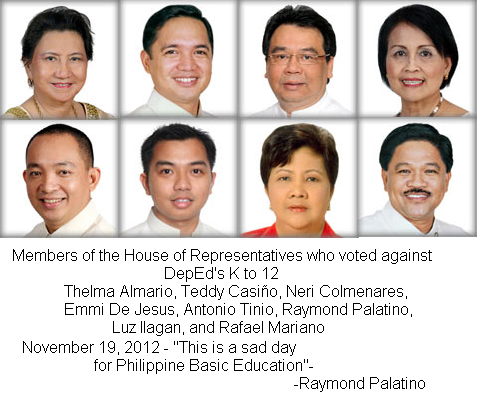 This blog has provided more than enough arguments against DepEd's K to 12. What one has to realize here is the fact that in the Philippines, specific party lists are necessary to have the voices of the youth, educators, students and women heard in Congress. These party lists actually have to run for political representation. And their representation cannot exceed 20 percent. The question to ask now is what do the remaining 80 percent of the House and the Senators in the Philippines truly represent.