May 30, 2013
Science and math education requires both mastery of content and acquisition of skills. Unfortunately, education programs usually neglect one of these two, placing greater emphasis only on one. Skills required for scientific work also come in two flavors. Collection, presentation and organization are useful skills but these are oftentimes superficial. The connection between skills and content manifests in a student's ability to arrive at sound explanations and valid conclusions. Science is not just a thinking process. And so is math. There are things that are correct and there are things that are deemed incorrect.  Back in 1999, the National Center for Education Statistics in the US recruited mathematicians and mathematics education experts to view mathematics lessons taught in Japan, Germany and the US grade 8 classrooms, and the following graph summarizes the evaluation of these experts:

With the above figure in mind, one can look back at how these three countries performed in the math section of TIMSS 1999 and arrive at a partial explanation as to why Japan outperformed both Germany and the US.

In 2006, Roth and Garnier examined closely the science classrooms in Grade 8 in top performing countries and the US to see what sets US classrooms apart from this group:

Using the Trends in International Mathematics and Science (TIMSS) video study, the authors compare science teaching practices in the United States and in four other countries that outperformed the United States: Australia, the Czech Republic, Japan, and the Netherlands. Their observations of videotapes from 100 8th-grade science lessons in each country revealed two major differences between the higher-achieving countries and the United States. First, each of the higher-achieving countries had a distinct core pattern of science teaching; in contrast the U.S. lessons were characterized by variety. Second, in all the higher-achieving countries, science lessons were content-focused—activities were closely linked to the development of science concepts. The authors recommend that U.S. schools improve their science education by adopting this focus on content.

The lack of emphasis on content is highlighted in the following figure from this study (Roth K, Garnier H. What Science Teaching Looks Like: An International Perspective. Educational Leadership [serial online]. December 2006;64(4):16-23. Available from: Academic Search Premier, Ipswich, MA. Accessed May 29, 2013.):

Yet, fads regarding science and math education reforms ignore the above. There is too much focus on inquiry, on process, on skills. Content is neglected. Exploring this disconnect in science and math education, researchers from Arizona went deeper and surveyed teachers' preferred observations of students (Talanquer, V., Tomanek, D. and Novodvorsky, I. (2013), Assessing students' understanding of inquiry: What do prospective science teachers notice?. J. Res. Sci. Teach., 50: 189–208. doi: 10.1002/tea.21074).

The theoretical construct of teacher noticing has allowed mathematics teacher educators to examine teacher thinking and practice by looking at the range of activities that teachers notice in the classroom. Guided by this approach to the study of teacher thinking, the central goal of this exploratory study was to identify what prospective science teachers notice when evaluating evidence of student understanding in another teacher's inquiry-based unit. Our results are based on the qualitative analysis of 43 prospective teachers' evaluations of assessment evidence presented to them in the form of a video case and associated written artifacts. Analysis of our data revealed two major categories of elements, Task-General and Task-Specific, noticed by our study participants. Task-General elements included attention to learning objectives, independent student work, and presentation issues and they often served to guide or qualify the specific inquiry skills that were evaluated. Task-Specific elements included the noticing of students' abilities to perform different components of an investigation. In general, study participants paid attention to important general and specific aspects of student work in the context of inquiry. However, they showed preferential attention to those process skills associated with designing an investigation versus those practices related to the analysis of data and generation of conclusions. Additionally, their interpretations of assessment outcomes were largely focused on the demonstration of general science process skills; much less attention was paid to the analysis of the epistemological validity or scientific plausibility of students' ideas. Our results provide insights into the design of meaningful learning experiences for prospective teachers that elicit, challenge, and enrich their conceptions of student understanding in the context of inquiry. © 2013 Wiley Periodicals, Inc. J Res Sci Teach 50:189–208, 2013
The following table from the above study illustrates just how little attention is given by teachers on skills that are in fact closely linked to content: 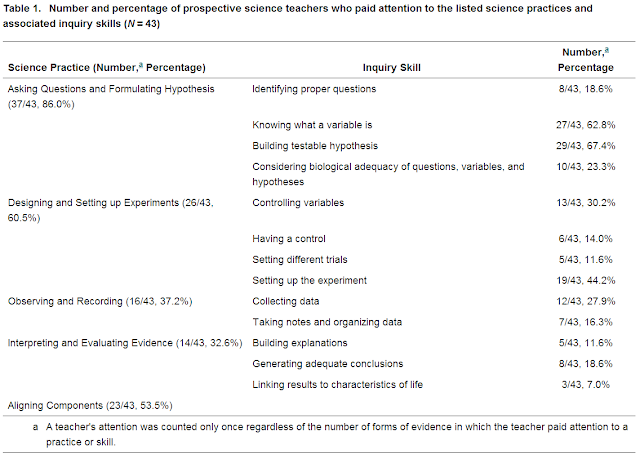 As the authors noted, "...attention to process skills related to the definition, setting up, and implementation of the investigation was more prevalent than attention to students' abilities to building explanations and generating valid conclusions."

Hands-on activities, real world examples - these are spices. Focusing on these is like looking at the trees and missing the entire forest. Math and sciences have a story line. There is a sequence, otherwise, the big story is not seen. Math and sciences are not just random collections of chapters, each one having with its own plot and seemingly attractive activities. There is coherence and learning both math and science requires such connections. Skills and content are both important. One cannot sacrifice one for the other.

Roth and Garnier summarized the difference between the high performing countries and the US in the following paragraphs:


These comparisons of science lessons in five countries reveal striking differences in middle school science instruction. All the higher-achieving countries in the video study shared high content standards and a content-focused instructional pattern. In Australia and Japan, for example, teachers carefully and thoughtfully developed just one or two science ideas across a lesson, presenting the ideas in a logical, coherent sequence. They expected students to understand science concepts and be able to support those concepts with specific evidence. In the Czech Republic, teachers sometimes presented content conceptually and sometimes by introducing many facts, theories, and terms related to a given topic. But in both cases, Czech teachers held their students to high standards for mastering challenging, often theoretical content through frequent oral reviews, assessments, and public student work. In the Netherlands, science content expectations were high in terms of holding students responsible for their own independent learning.

This focus on high content standards distinguished science instruction in the higher-performing countries from that in the United States, where content was often secondary to activities. Each of the other countries had a distinct instructional approach, but all of these approaches strongly focused on developing science content and connecting that content to activities, in contrast to the fragmented variety of pedagogical approaches and activities that characterized U.S. science lessons.