May 14, 2013
Father Cecilio Magsino wrote recently an opinion in the Philippine Daily Inquirer, "Teaching science not enough". In the article he stated the following:

"...the value of teaching the sciences should be emphasized in our school systems.

These are very good proposals and I agree with them. I am a Catholic priest, but I finished high school in a premier science high school of the country and I obtained a physics degree from the University of the Philippines, Diliman.

I would just like to add a little caveat. I have learned that science does not give all the answers to all of mankind’s big questions. Science cannot give wisdom. One has to study more things outside the scientific disciplines to become wise. And it is wisdom that tells us the meaning of science and how to draw true good out of it.

Wisdom is a "big" word for me. I am not sure what it really means. I am also uncertain with regard to what mankind's biggest questions really are. Should a child really need to focus on deep philosophical questions? So I choose to focus more on early childhood learning and less on ethereal stuff, matters that really depend on one's religion or beliefs. So what does research say about learning during the early years? An extensive longitudinal study published in the journal Developmental Psychology provided the following findings: 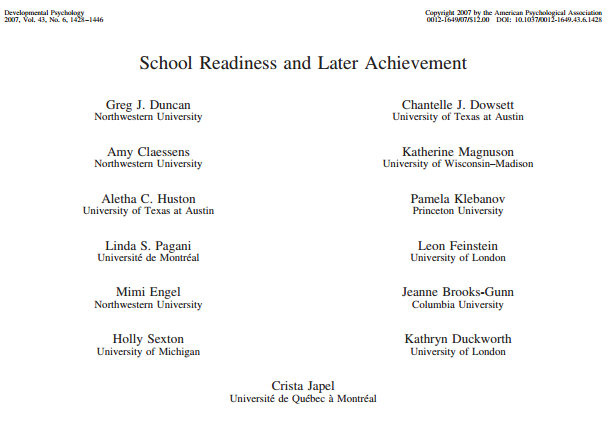 Using 6 longitudinal data sets, the authors estimate links between three key elements of school readiness—school-entry academic, attention, and socioemotional skills—and later school reading and math achievement. In an effort to isolate the effects of these school-entry skills, the authors ensured that most of their regression models control for cognitive, attention, and socioemotional skills measured prior to school entry, as well as a host of family background measures. Across all 6 studies, the strongest predictors of later achievement are school-entry math, reading, and attention skills. A meta-analysis of the results shows that early math skills have the greatest predictive power, followed by reading and then attention skills. By contrast, measures of socioemotional behaviors, including internalizing and externalizing problems and social skills, were generally insignificant predictors of later academic performance, even among children with relatively high levels of problem behavior. Patterns of association were similar for boys and girls and for children from high and low socioeconomic backgrounds.

A study published in Early Childhood Research Quarterly in 2012 provides evidence for the benefits of early childhood mathematics education to oral language and literacy:

Children who were exposed to a preschool mathematics curriculum called Building Blocks (which makes use of puzzles and manipulatives to introduce numbers and shapes to preschool children) were better in four of the six oral language measures: information, complexity, independence, and inferential questions. Mathematics certainly refines a child's way of communication. It requires precision and identification of what is key. Before math, a square is simply a square, but after math, it is now a figure that has four equal sides, four corners, ale being right angles.

I would not be surprised to see that science would achieve the same thing. Observing nature would provide an interesting subject for conversations. Science is descriptive. It also requires precision. Experiments likewise introduce a child to diligence, respect, cooperation, perseverance and honesty.  Karen Worth writes in "Science in Early Childhood Classrooms: Content and Process":

"The exploration of the natural world is the stuff of childhood. Science, when viewed as a process of constructing understanding and developing ideas, is a natural focus in the early childhood program. ...Children’s inquiry into appropriate phenomena is not only the place to build foundational experiences for later science learning, it is fertile ground for the development of many cognitive skills. It also is a context in which children can develop and practice many basic skills of literacy and mathematics. Finally, science is a collaborative endeavor in which working together and discussing ideas are central to the practice."