Learning in the Early Childhood Years

May 20, 2013
Human learning is inextricably linked to the physical development and changes within the human brain. Research in both neuroscience and behavioral psychology over the past few decades have provided rich insights on how the brain develops during the early years and how this affects learning, behavior and health in the later years. As in any building task, the foundation is formed at the early stages. The strength, stability and resilience of a building rest on how well the foundation is built. For human learning, most of the foundation is formed in the early years. The physical connections that the brain uses (neurons) are shaped by experience. The brain is designed from birth to learn. What neuroscience currently shows is that this network, the circuitry in the brain, its architecture, is influenced by early childhood experiences. The brain is highly flexible at the early stages. However, with time, this flexibility disappears and rigidity sets in. The plasticity only remains for a short time in early childhood as connections in the brain that have been rarely used are shut down in a pruning process.

The Center on the Developing Child at Harvard University has provided a brief summary of where research in neuroscience and behavioral development currently stands on early childhood learning.  The following figure provides a good idea of when most of the network architecture inside the brain is developed. One must pay close attention to the change in the x-axis to appreciate fully the fact that the earlier part of this growth curve has been expanded into months while the later part is compressed into years: 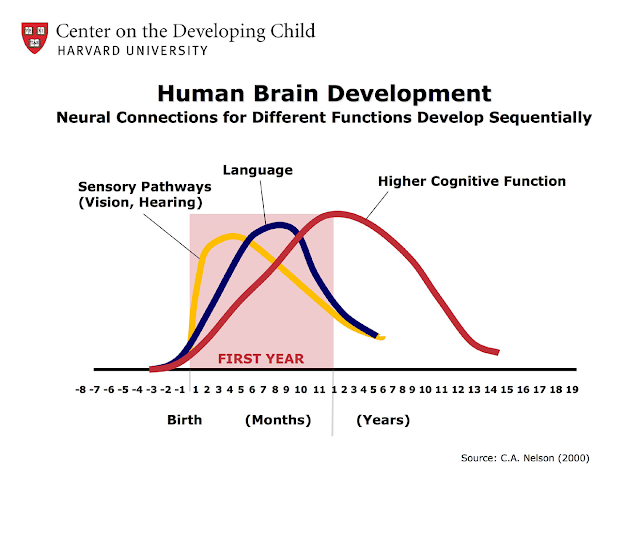 The following is a video that helps visualize what is going inside the brain during the early formative years:

The Center on the Developing Child at Harvard University provides the following bullet points that summarize what is currently known from research:
Clearly, a very important take-home message from these studies is the defining role of early childhood care in a person's development. What happens or does not happen in the early years greatly influences life in adulthood. What experiences shape the brain in its early years can affect learning in the later years. These seem to be clear points.

I would like, however, to explore the third point from the above list, "The brain’s capacity for change decreases with age." The brief specifically mentions:


The brain is most flexible, or “plastic,” early in life to accommodate a wide range of environments and interactions, but as the maturing brain becomes more specialized to assume more complex functions, it is less capable of reorganizing and adapting to new or unexpected challenges. For example, by the first year, the parts of the brain that differentiate sound are becoming specialized to the language the baby has been exposed to; at the same time, the brain is already starting to lose the ability to recognize different sounds found in other languages. Although the “windows” for language learning and other skills remain open, these brain circuits become increasingly difficult to alter over time. Early plasticity means it’s easier and more effective to influence a baby’s developing brain architecture than to rewire parts of its circuitry in the adult years.

Language learning is a major issue faced by basic education. There is one camp out there that advocates as far as suggesting that mother-tongue based instruction is more effective. The implication from the neuroscience studies is that language learning occurs at an early age. The breadth and robustness of the brain architecture formed during early childhood depends on a child's exposure to a language. Clearly, this does not depend on what language an infant is first exposed to. What matters is the richness and depth, the vocabulary and precision. The two countries, Finland and Singapore, offer two seemingly opposing options. In Finland, the mother tongue is used as medium of instruction while Singapore teaches primarily in English. What these two countries probably have in common is a childhood marked with rich conversations between infants or toddlers with their parents or caregivers. It is amazing that difficulty in English language learning across the globe is often associated with socio-economic background as well as educational attainment of parents. These are factors that are likewise expected to correlate quite strongly with the type and level of the language used at home. It does not really matter what language is used. If conversations are limited to "No", "Stop it", the vocabulary of a child entering school is poor. More importantly, as neuroscience suggests, the network connections are more likely not optimized for learning. In these cases, even if a child's mother tongue is English, the child may still be challenged in education. As well controlled studies have shown, it is not the medium of instruction but the quality of instruction that matters most. Mother tongue instruction equally fails if conversations in the early years are void of richness and depth in that language. It is perhaps one of the reasons why even children from English-speaking homes, but with parents less inclined to talk intelligently with their children, find themselves performing at the same level as children who are raised in homes with a different language, but also with parents less likely to engage their children in intelligent conversations.

Elsa Di Ruggiero cites in her blog the following study: 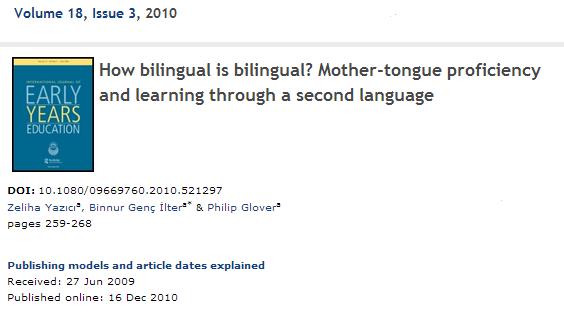 In a bilingual context, the mother tongue plays a key role in a child's social and personal development, in education and in second-language learning. There is a complex relationship between these three areas. Support for children receiving education through a second language is often in the form of additional learning opportunities in the second language. However, first-language competence has been shown to affect learning in the second language. This paper looks at pre-school migrant children in a bilingual context and investigates the nature of the children's bilingualism. Findings show that they do not have the same level of mother-tongue competence as children brought up in their country of origin. The paper goes on to consider the reasons for these differences in mother-tongue competence and possible responses. The paper concludes that for these children, nursery education in the mother tongue could raise levels of competence in the second language and increase wider educational opportunities, as well as contributing to mutual respect, social cohesion and harmony. There is a complex relationship between mother-tongue development, children's self-esteem, educational opportunities and second-language learning. This paper considers how this complex relationship affects groups of children in four European contexts: Turkey, Norway, Germany and Austria.


The learning of a second language is highly dependent on the effectiveness with which a child learned his/her mother tongue. Children with high grammar and vocabulary levels in their mother tongues have reportedly found it easier to learn a new language within the school setting and consequently, read and wrote more fluently and earlier. Therefore, the higher the mother-tongue competence, the greater readiness for reading in either the first or second languages (Yazici, Ilter & Glover, 2010).

Neuroscience research is telling us when it is optimum to achieve competence in mother tongue.  It is in the early years (not in the elementary years). The following paragraph by Patricia K. Kuhl in "Early Language Learning and Literacy: Neuroscience Implications for Education" highlights data from neuroscience studies and their implications of early childhood learning:


These results are theoretically interesting and also highly relevant to early learning practice. These data show that the initial steps that infants take toward language learning are important to their development of language and literacy years later. Our data suggest as well that these early differences in performance are strongly related to experience. Our studies reveal that these early measures of speech discrimination, which predict future language and literacy, are strongly correlated to experience with “motherese” early in development (Liu, Kuhl, and Tsao, 2003). Motherese exaggerates the critical acoustic cues in speech (Kuhl et al., 1997; Werker et al., 2007), and infants’ social interest in speech is, we believe, important to the social learning process. Thus, talking to children early in life, reading to them early in life, and interacting socially with children around language and literacy activities creates the milieu in which plasticity during the critical period can be maximized for all children.

Advocates of mother tongue-based multilingual education perhaps need to pay attention to what they are in fact facing. The real problem may actually lie in the early years - before kindergarten. A child who does not get exposed to language and literacy activities even in the mother tongue during the early years is already at a disadvantage before school starts. The solution may not lie in the elementary years.  Returning to the Harvard study, it concludes:

The basic principles of neuroscience indicate that early preventive intervention will be more efficient and produce more favorable outcomes than remediation later in life.