When We Neglect Children

February 08, 2013
When I was an adolescent, I used to spend the early part of the evening on the street. My friends and I would be just loitering in front of somebody's house. We idly watched people passing by as they were going home from work. There were times when I would get the opportunity to see how my other friends were doing in school. It did not happen too often but there were occasions in which I saw what one of my friends had to do in algebra. Some of my friends did know that I had above average skills in math. I did try to teach one of them. This person had been repeating high school while I was already in college. I had the impression that people thought that being good in math was something innate or inborn. So in the face of just one failure, some simply would resign. As I was trying to help my friend, I could sense that I even had a greater drive than he did. I was much more optimistic and determined that he would learn than he was about himself. After several evenings, it was becoming quite clear that he did not have the concentration, the attention, the discipline that was required.

Focus, determination, self-control and working memory are not obtained by birth. The Center on the Developing Child at Harvard University has been collecting over the years resources and data on early childhood development. There have been various experiments that provide insights on how a brain develops, how this is correlated with cognitive development, and how this is affected by experiences and interactions in the early years. The Center currently has working papers, each one focusing on a particular aspect of early childhood growth and development. One of these working papers is "The Science of Neglect".

The paper begins with the following sentence:


The building blocks of thriving communities and well-functioning societies rest on the health and development of their people. Beginning immediately after birth, a strong foundation for human well-being requires responsive environments and supportive relationships to build sturdy brain circuits, facilitate emerging capabilities, and strengthen the roots of physical and mental health.

The paper also highlights the following figure from Egeland, B., Sroufe, A., & Erickson, M. (1983). The developmental consequence of different patterns of maltreatment. Child Abuse & Neglect, 7(4), 459-469. 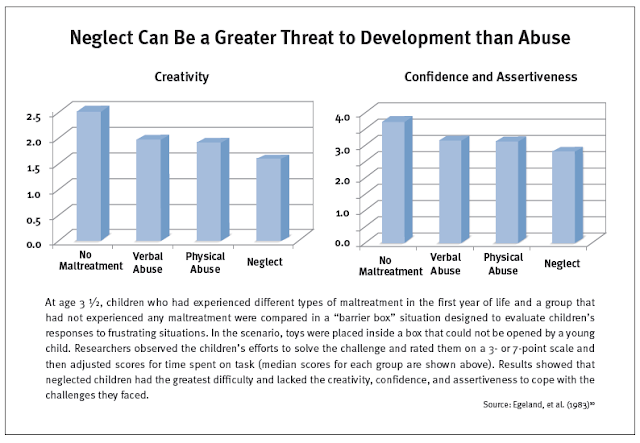 It shows that "neglect" has more severe consequences than "abuse". "Neglect" is defined as unresponsive care, which can be characterized in various degrees. The first kind is the occasional inattention, which normally happens in any household. For this, there is no harm and no intervention is necessary. In fact, occasional inattention helps the child develop earlier a sense of "self" and "others". The harm begins with the second kind, "chronic under-stimulation". At this level, developmental delays can already happen and interventions are already needed. Above these two is "severe neglect", which can occur in both family and institutional (orphanage) settings. In the family setting, "severely neglected children" do not have their basic needs (food and clothing) met. In the institutional setting, the lack of a one-on-one (individualized) responsive relationship with an adult leads to "severe neglect". With these, the brain is unable to develop and form the required circuitry. Intervention is required as soon as possible.

Research from the past thirty years on early childhood growth and brain development poses a serious warning to society. A recent Education Week post describes an implementation of some of the findings of Harvard's Center in the state of Washington. Indeed, most of the work is focused on intervention in young children. There are a few that look at possible intervention in the teenage years. To this, Dana Phelps, who works with the juvenile-rehabilitation services says, "We were very excited that people stopped saying, 'Do it by age 5, or there's nothing you can do,' and started saying, 'The brain is very plastic and can change over time,'. Great, you're telling us it's not too late, we can still make a difference in these kids' lives to keep them out of prison." (quotation from "Overcoming Impact of Adversity on Learning") Sadly, even with this tiny pinch of optimism, the Harvard working paper emphasizes early intervention and prevention. Remediation at a later stage is not as promising.