February 01, 2013
Education involves so many factors. The ideal is a well-controlled data-driven study with quantitative significant testing. This is a comment I heard from a scientist at Johns Hopkins University. This scientist even adds that "Decisions impacting children's future should be based on statistically proven results with at least a 95% confidence level." When I asked this scientist to describe in detail how a study should be performed, the response was:


"I would start simply - just select at least two classes on the first year, assign about equal students in each class at random, and use the method to be tested on one class and the conventional on the other. Use standardized tests before, during and after the school year. Analyze with a paired t-test. All other variables beside the method of instruction should be the same, hence the analysis is only for the effect of the two instructional methods. You can continue this for years...."

Browsing through journals, I found an example. And coincidentally, the first author of the published study is also from Johns Hopkins (different person, though). The paper's first author is Robert E. Slavin. Slavin also writes for the Huffington Post so one could find the following on the Post's website:


Robert Slavin is Director of the Center for Research and Reform in Education at Johns Hopkins University School of Education, Director of the Institute for Effective Education at the University of York (UK), and the co-founder and Chairman of the Success for All Foundation. He is an expert on research-based school improvement, reading instruction, English-language learners, and federal education reform policy. Slavin has authored or co-authored more than 300 articles and 24 books. He received the Distinguished Services Award from the Council of Chief State School Officers in 2000, the AERA Review of Research Award in 2009, the Palmer O. Johnson Award for the best article in an AERA journal in 2008, and was appointed as a Member of the National Academy of Education in 2009 and an AERA Fellow in 2010.

Slavin is one of the world's experts on education research. The paper I came across is from the following journal:

The following is the title and abstract of the paper: 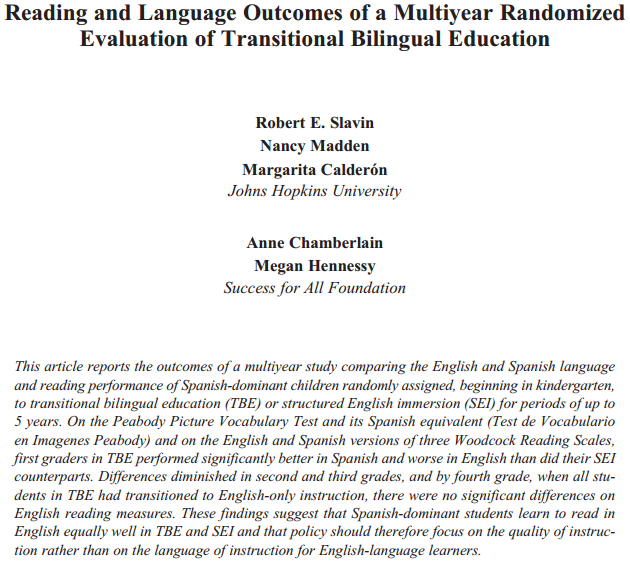 The study fits the description. This is randomized, students were assigned either to a Spanish medium or an English medium class without prejudice. Parents' permission was obtained for all the students participating in the study but the parents had no say to which class their children would be assigned. All children were pretested in both standardized English and Spanish exams. With the Spanish language, learning resources as well as assessment tools are readily available. The Spanish pretest scores at kindergarten were used to ensure that all the students participating in the study were indeed "Spanish dominant" (Spanish is their mother tongue). The rest of the study took five years. Each year the students take pretests and post tests. And as the abstract above points out: In terms of both English and Spanish tests, there is no difference in learning outcomes between the two languages of instruction.

The paper is not only useful in that it provides a well-controlled study but it also spends quite some time in its introduction discussing previous studies on multilingual education. The paper correctly notes the lack of consensus among studies in the area. However, the results presented in this paper actually agree with the few reliable long term evaluations of bilingual education that have been done in the past.


"...Yet in this study, fourth graders who had been taught to read in Spanish from kindergarten to second grade scored nonsignificantly better than those taught only in English on measures of Spanish language and reading."

This is quite similar to non-Tagalog school children in the Philippines doing as well or even better in the Filipino section (which is mostly Tagalog) of the National Achievement Test.

Finally, this study concludes with the following very important statement:

The findings of the present study reinforce the frequently stated conclusion that what matters most in the education ... is the quality of instruction, not the language of instruction... Schools may choose to teach ... in either their native language or English for many reasons, including cultural, economic, or political rationales. Yet the data from this experiment do not support the claims that this choice is crucial for ultimate learning of English or Spanish reading.