February 18, 2013
At the Ateneo, I actually took a class where the students were assigned seats. It was a class in Economics and the students were seated alphabetically. Having a last name that started with "D", I was seated near the front row. Seating arrangements were also employed in the small parochial school that I attended in Quiapo, Manila. In grade school, however, we were not seated alphabetically. Instead, our place inside the classroom was determined by our test scores. There was the "star" column and the top quartile was assigned to this column of school desks. The setup was quite similar to the photo shown below:

Facing the blackboard, the "star" column was the rightmost. In this arrangement, we were made quite aware of where we stood in the class. The seating assignment was adjusted or updated every quarter but throughout the years, there was really no movement. For years, the makeup of the "star" column was unchanged. In high school, some classes were held with boys on one side of the classroom and girls on the other side, each group was also arranged alphabetically. This allowed for quick attendance checks but I did not understand why the two genders were usually separated. Unlike in grade school, there were various sections for each year, thus, the segregation according to test scores was done at this level. In the last two years of high school, I was lucky enough to be placed in the "star" sections. As in elementary, the composition of these "star" sections did not really vary much throughout the years. "Einstein" was the name of the star section in fourth year and "Bohr" was used for the third year class. During my time, most of my classmates in III-Bohr were also my classmates in IV-Einstein. If learning was contagious, I was really in a good position. And indeed, I was. I knew how good my classmates were. At one time, we were asked to read John Steinbeck's "The Grapes of Wrath". One of my high school classmates wrote in his analysis of this book a section about one of the characters in the book, Jim Casy. My classmate noted that the initials of this character were "J.C.", that this character died while saving another, and in that last moment of breath said, "You don' know what you're a-doin". I thought to myself, "This classmate of mine was pretty deep". Hanging around him would probably help me become smart as well.

This study followed more than a hundred high school students in Maine-Endwell High School, Endwell, NY, USA and found that a student's grade point average (GPA) correlates with his or her friends' GPA's. The social network analysis likewise suggested that the future performances of the students were strongly influenced by peers: A student whose friends have higher GPA's tend to improve his or her own GPA over time. So academic success appears to be truly a contagion. A more detailed regression analysis revealed what type of relationships predominantly influences academic performance. "Best friends" are not as strongly correlated, presumably because these relationships are deeper. In these stronger relationships, acceptance was already a given and these friendships were based on common interests and times spent together. Best friends had already shared a lot of experiences together. Mere acquaintances were also weakly correlated with performance in class. The study showed that "intermediate relationships" were the ones correlating strongly with a student's GPA. This finding is summarized in the following table: 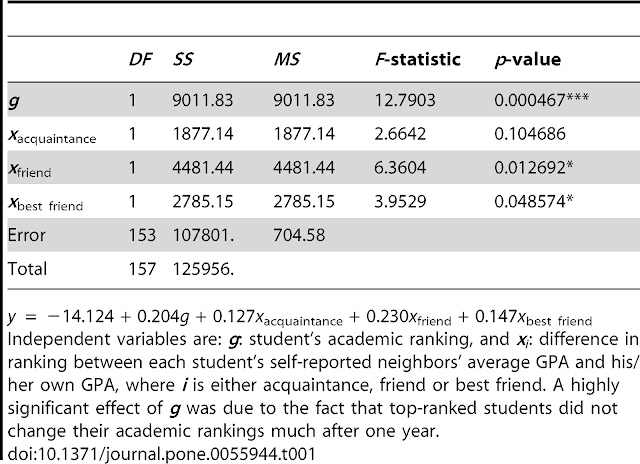 Peer influence may be explained by its effect on a student's motivation and engagement. Various education reforms have been proposed to eliminate achievement gap between students. Most of these carry significant costs. Tapping into peer influence paves a cheap route to reducing achievement gap. Seating arrangements and assignments of students to sections do not cost millions of dollars or pesos. Of course, there is the possibility that a weak student may pull down the performance (a negative effect) of a good student. This is where effective teaching or mentoring comes into play, ensuring that the influence is always positive, that is, a good student always influences a weaker one to improve.