February 06, 2013
The Guardian reports that Britain, Canada and the United States are the only countries among the Organization for Economic Cooperation and Development where 15-year old girls do not outperform boys in science. The National Science Foundation of the United States has compiled statistics that show the gender gap in the sciences and engineering:

To understand this gap, one must start with the makeup of the population in the US: 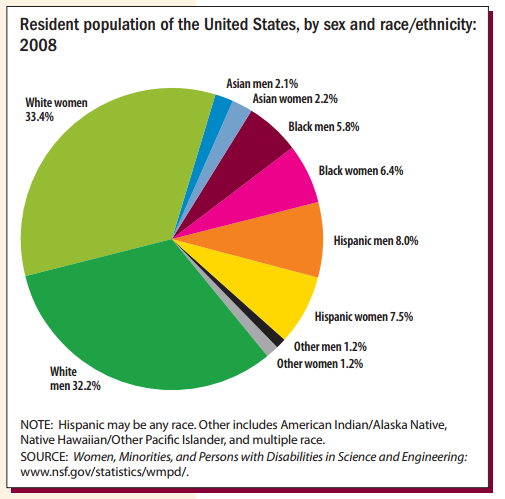 Adding all the women, one can see that females make up about half of the population in the US. If certain professions do not reflect a composition similar to the general population, this is a sign of a gap. The following figure (although from a different year) dramatically shows a gender gap: 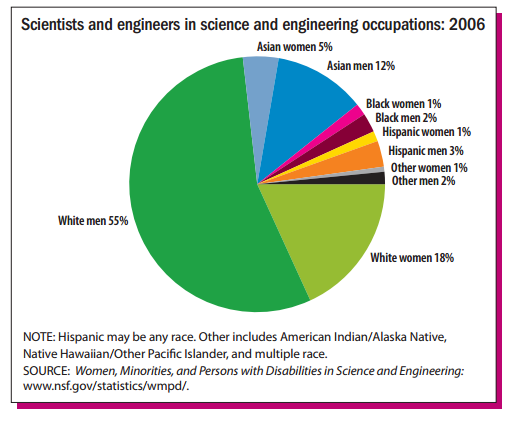 Here, only 26% of scientists and engineers are women. It is interesting though that Asian males and females are over represented. There is a huge difference between the two figures above. White males are dominating these fields. Yet, productivity-wise, females perform as well as males: 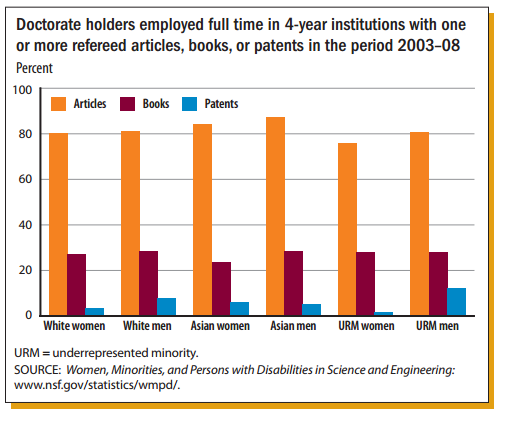 Close to eight percent across the board are publishing. The gender gap is likewise seen in higher education. Although improving across the past decades, the percentage of female full professors is still way below that of the general population. 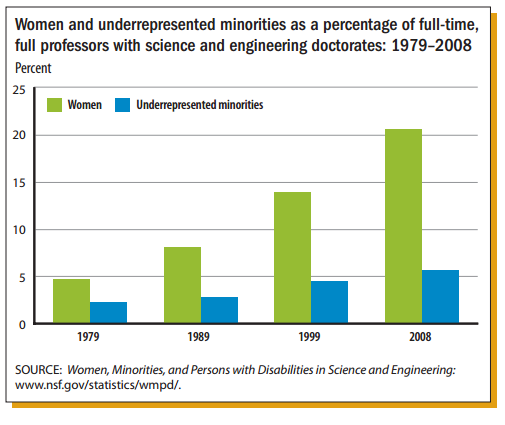 Interestingly, the participation of women is high in some areas as shown below: 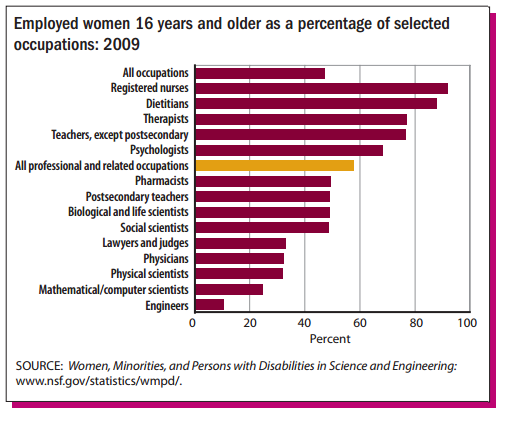 The health care professions (nurses, dietitians, therapists) are dominated by women. Primary and secondary teachers are also mostly female. Females are largely underrepresented in law, medicine, physical science, math and computer science, and engineering. These figures provide good evidence that a gender gap does exist in the sciences (specifically, the physical sciences), math and engineering. The above data are correlated with the results of science exams given to 15-year old students. In the US, female high school students do not perform as well as their male classmates. The Guardian writes the following in the article, "Girls and science: why the gender gap exists and what to do about it":


The US Department of Education has found that girls "who have a strong self-concept regarding their abilities in math or science are more likely to choose and perform well in elective math and science courses and to select math and science-related college majors and careers".

The department emphasizes that: "improving girls' beliefs about their abilities could alter their choices and performance … particularly as they move out of elementary school and into middle and high school."

The above traces possible origins of the gender gap to as early as middle school. This is particularly interesting since teachers at this level are mostly female.

The United States Department of Education recommends the following steps to address the gender gap in the sciences and engineering:
The Guardian lists more specific actions that can be taken:
There is no reason for these suggestions not to apply to young minds, in general. A developing country like the Philippines which lacks manpower in the fields of mathematics and the sciences needs to find every possible way to attract young children to these disciplines. The significance of the female gender should also be considered in the light of the fact that in the Philippines, the educational attainment of the mother correlates strongly with school attendance (or dropouts). Science is mostly hard work and perseverance. It requires interest, for this is the only thing that could overcome the perceived challenges of these subjects. Science could be learned. In fact, it could only be learned. It is not decided by gender. It is not decided by genes. It is nurtured not natural.

To end on a lighter note, here are the two brains: