How a System Responds to Change

February 13, 2013
In the quest for alternative sources of energy, microorganisms can be tapped for the production of biofuels. Some Clostridium bacteria, for example, can produce butanol from the sugar that these microorganisms are fed. This scheme has not reached the desired yield yet to compete with industrial processes. One of the reasons involves unwanted responses from these living systems to the imposed perturbation. The desired product, for instance, when present in significant amounts, can be toxic to the bacteria. The microorganism can also alter pathways in its "chemical factory" that will reverse the process of producing the desired fuel and convert it into a nutrient that the microorganism can actually use. Photosynthetic bacteria also hold promise if the intrinsic ability of these organisms to harness sunlight can be utilized to produce fuel such as alkanes or hydrocarbons. Similarly, in these cases, the bacteria use sunlight to produce its nutrients for growth and survival. Channeling this process into production of something else elicits unwanted responses from the bacteria. Unable to use sunlight to generate its own food because it is forced to produce fuel instead results into the death of the organism. Systems respond to changes. Thus, it is necessary to analyze a system, understand how each component depends on each other, in order to anticipate possible responses to a perturbation that will be introduced.

Public basic education is a system and education reform is a major perturbation. An intelligent reform not only weighs and examines how the proposed changes will improve the system, but it also must put in place good monitoring measures to see in real time how the reform is taking place. Of course, pilot studies are important, but even with the best preliminary studies, problems of scaling as well as transferability still arise. In health care, when a physician prescribes a medicine, follow-ups and tests are usually necessary to monitor how a patient is responding to the therapy. Education is no different.

Recently, France Castro of the Alliance of Concerned Teachers (ACT) spoke in a forum on DepEd's K to 12 at the Ateneo de Manila Uiversity: 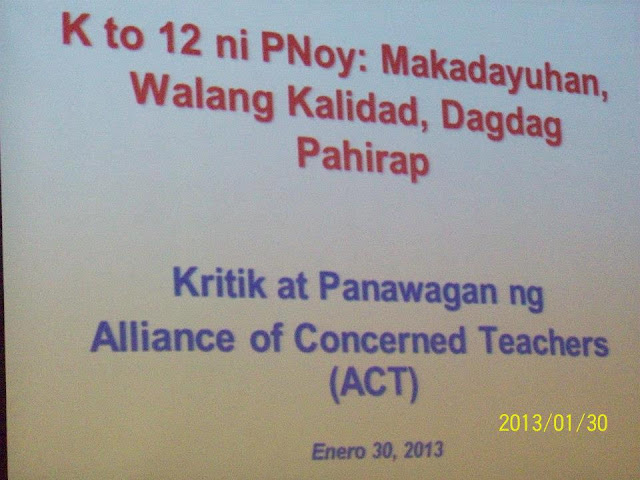 I was not in attendance in that forum. I do not have a transcript or a record of the presentation given by ACT's France Castro. However, based on the photos above, it is clear that this talk was not about praising DepEd's K to 12. The objections raised by ACT against DepEd's K to 12 have been related in various posts in this blog so it is probably unnecessary to repeat those points here. After all, DepEd's K to 12 is now simply awaiting the president's signature to make it completely legal in the Philippines. The perturbation, after all, has already been applied.

What is worth noting are some of the comments I saw provided by teachers to the photos posted by France Castro on Facebook. Some of these comments may appear to be trivial or "old story". However, these comments do carry very serious implications. The first comment (and this is perhaps expected because of the enormity of the reform) is about not having the materials necessary for the new curriculum. Related to this is the required training for the new curriculum is not reaching all the teachers that need to be trained. Teacher training is done by selection. A principal chooses from the teachers those who would be sent to regional seminars or training sessions and one teacher complains that this scheme plays to favoritism. These are "old stories". So what is new? Keeping the above comments in mind and looking at how language is taught in the new DepEd's K to 12 curriculum leads to serious implications:

The above summarizes in a way the language component of the curriculum of Grade 1 in the new DepEd K to 12 curriculum. The lack of materials is important especially when the text for reading is not available in the mother tongue. Without any text to read, there is really nothing in the curriculum that allows students to learn to read. Everything seems oral. Thus, one comment (which I have translated and edited) goes:

...There is no reading in grade one. What will happen to our pupils when they go to grade 2. All they could do right now is to express their ideas by speaking and singing. Is this not the same as kindergarten? Formal lessons in reading start only in grade 2.. I really do not know where this new DepEd K to 12 curriculum will lead us. As they say, it is already here so we might as well embrace and do everything we can....