February 22, 2013
Maria Bustillos of The Awl recently wrote quite a lengthy essay, "Venture Capital's Massive, Terrible Idea For The Future Of College". The article was placed under "Bad Education". In the essay, Bustillos covered the reflective and polite debate between Aaron Bady and Clay Shirky. Clay Shirky suggests that the internet's effect on education will be similar to what happened in the music industry. In his blog, Shirky wrote:

"The recording industry concluded this new audio format would be no threat, because quality mattered most. Who would listen to an MP3 when they could buy a better-sounding CD at the record store? Then Napster launched, and quickly became the fastest-growing piece of software in history. The industry sued Napster and won, and it collapsed even more suddenly than it had arisen.

If Napster had only been about free access, control of legal distribution of music would then have returned the record labels. That’s not what happened. Instead, Pandora happened. Last.fm happened. Spotify happened. ITunes happened. Amazon began selling songs in the hated MP3 format.

How did the recording industry win the battle but lose the war? How did they achieve such a decisive victory over Napster, then fail to regain control of even legal distribution channels? They crushed Napster’s organization. They poisoned Napster’s brand. They outlawed Napster’s tools. The one thing they couldn’t kill was the story Napster told."

Bady's point of view is nicely summarized in a response given to Bustillos:


"Academic culture is a huge and diverse ecosystem. People who come along with grand plans about how everything is going to be transformed so often don't have even a very shallow understanding of how that ecosystem works: You have all these Silicon Valley venture capitalists who are going to blow everything up and transform it; what you're really talking about doing is killing all the green plants in the ecosystem and then expecting the deer to have something to eat; no; the deer are going to die. There's this basic economic argument for the cheapness of online education that is always about requiring less labor; paying people less, replacing people with technology. And at the end of the day, what you're going to have is a very stagnant intellectual culture.

"Who writes the textbooks? Who writes the lectures? You tape the [MOOC] lecture once, but then what happens next year? You just keep recycling the same materials over and over again? It's like a really bad ecological management system; you think you can remove something that is really crucial to the ecosystem, and nothing else will change?"

The effects of online learning for fulfilling degree requirements can be quite damaging especially when most of these usually shy away from the demanding disciplines of chemistry, physics and biology. Diploma mills do not offer bachelor degrees in the hard sciences. The physical sciences add significantly to the academic atmosphere inside a real university or college. Students enrolled in these courses usually spend more time inside laboratories. These students do plenty of reading and homework as well. These disciplines cannot be easily winged by a diploma mill. The quality of a university is intimately linked to the quality of its education in the basic sciences since these are the fields that require a lot of resources and talent from a school. Research in these fields are likewise straightforward to gauge. Unlike other fields, workers in biology, chemistry and physics maintain a strong network. Most cited researchers are in these fields because people do read and review each other's work. Unfortunately, this is not the case in other fields.

Education is one field that can be affected negatively by Massive Open Online Courses (MOOC). Online universities are now offering both master's and doctorate degrees in education. Graduate education in the physical and biological sciences is a full-time endeavor. Those with children usually find it quite challenging, if not impossible, to get a doctorate of philosophy degree in chemistry. Research and learning require a lot of time and attention. Earning advanced degrees in education should require no less. We need to be reminded of Bruce D. Baker's article, "Ed Schools - The Sequel: Rise of the Intellectually Dead", where he presented the following figure: 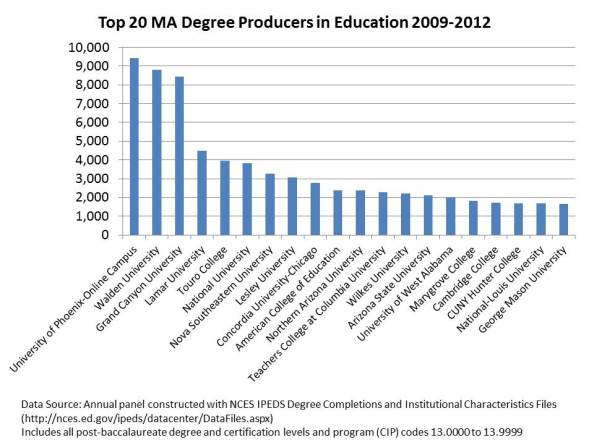 Something is going on in higher education and it may have serious effects on basic education.