State of the Heart

February 24, 2013
There is "state of the art". There is "state of the heart". Technology can deliver but only in the mind does imagination flourish. Without engagement, both text and images remain simply on the medium. The internet is no different from books in print. Everything remains there unless a seeking spirit captures it and takes ownership. Peter Guber writes in "The Inside Story" (posted in Psychology Today):

PowerPoint presentations may be powered by state-of-the-art technology. But reams of data rarely engage people to move them to action. Stories, on the other hand, are state-of-the-heart technology—they connect us to others. They provide emotional transportation, moving people to take action on your cause because they can very quickly come to psychologically identify with the characters in a narrative or share an experience—courtesy of the images evoked in the telling...

...Navigating a Narrative World, without stories not only would we not likely have survived as a species, we couldn't understand ourselves. They provoke our memory and give us the framework for much of our understanding. They also reflect the way the brain works. While we think of stories as fluff, accessories to information, something extraneous to real work, they turn out to be the cornerstone of consciousness....


In spite of all the excitement, however, the human brain has been on a slower evolutionary trajectory than the technology. Our brains still respond to content by looking for the story to make sense out of the experience. No matter what the technology, the meaning starts in the brain. The transmedia producer may get the credit line, but the success of the transmedia effort rests on the resonance, authenticity, and richness created by the storyteller.

Stories are authentic human experiences. Stories leap frog the technology and bring us to the core of experience, as any good storyteller (transmedia or otherwise) knows. There are several psychological reasons why stories are so powerful.


It is good that both Philippine president and his DepEd secretary seem to recognize the importance of storytelling in classrooms as displayed in the photograph below.

There is apparently a nationwide synchronized reading program every first Monday of November from nine till ten o'clock in the morning.

Stories are indeed powerful. My son who is fascinated with animals can watch a documentary on cheetahs and lions over and over because there is a story narrated in the film. The documentary film is by National Geographic:

Seeing my son watch this show only demonstrates all of the reasons cited above by Rutledge that explain why storytelling is such a powerful tool.

Although science is founded on data and proper analysis, scientists often use anecdotes or stories to engage the audience.

Of course, my joke does not even come close to the classic story of Kekulé: (From Wikipedia)


The new understanding of benzene, and hence of all aromatic compounds, proved to be so important for both pure and applied chemistry after 1865 that in 1890 the German Chemical Society organized an elaborate appreciation in Kekulé's honor, celebrating the twenty-fifth anniversary of his first benzene paper. Here Kekulé spoke of the creation of the theory. He said that he had discovered the ring shape of the benzene molecule after having a reverie or day-dream of a snake seizing its own tail (this is a common symbol in many ancient cultures known as the Ouroboros). This vision, he said, came to him after years of studying the nature of carbon-carbon bonds. It is curious that a similar humorous depiction of benzene had appeared in 1886 in the Berichte der Durstigen Chemischen Gesellschaft (Journal of the Thirsty Chemical Society), a parody of the Berichte der Deutschen Chemischen Gesellschaft, only the parody had monkeys seizing each other in a circle, rather than snakes as in Kekulé's anecdote.[7] Some historians have suggested that the parody was a lampoon of the snake anecdote, possibly already well-known through oral transmission even if it had not yet appeared in print.[8] Others have speculated that Kekulé's story in 1890 was a re-parody of the monkey spoof, and was a mere invention rather than a recollection of an event in his life. Kekulé's 1890 speech[9] in which these anecdotes appeared has been translated into English.[10] If one takes the anecdote as the memory of a real event, circumstances mentioned in the story suggest that it must have happened early in 1862.[11] The other anecdote he told in 1890, of a vision of dancing atoms and molecules that led to his theory of structure, happened (he said) while he was riding on the upper deck of a horse-drawn omnibus in London. If true, this probably occurred in the late summer of 1855.[12]

Kekulé's most famous work was on the structure of benzene. In 1865 Kekulé published a paper in French (for he was then still in Francophone Belgium) suggesting that the structure contained a six-membered ring of carbon atoms with alternating single and double bonds.[4] The next year he published a much longer paper in German on the same subject.[5] The empirical formula for benzene had been long known, but its highly unsaturated structure was a challenge to determine. Archibald Scott Couper in 1858 and Joseph Loschmidt in 1861 suggested possible structures that contained multiple double bonds or multiple rings, but the study of aromatic compounds was in its earliest years, and too little evidence was then available to help chemists decide on any particular structure. 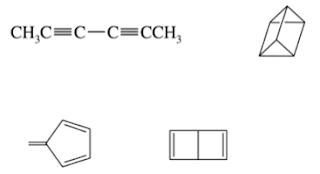 More evidence was available by 1865, especially regarding the relationships of aromatic isomers. Kekulé argued for his proposed structure by considering the number of isomers observed for derivatives of benzene. For every monoderivative of benzene (C6H5X, where X = Cl, OH, CH3, NH2, etc.) only one isomer was ever found, implying that all six carbons are equivalent, so that substitution on any carbon gives only a single possible product. For diderivatives such as the toluidines, C6H4(NH2)(CH3), three isomers were observed, for which Kekulé proposed structures with the two substituted carbon atoms separated by one, two and three carbon-carbon bonds, later named ortho, meta and para isomers respectively.

Although the structure of benzene is indeed a hexagonal ring of carbon atoms, the authenticity of Kekulé's dream had been questioned. In a New York Times article, "The Benzene Ring: Dream Analysis", there are simply too many different versions of this dream:


...various versions of the dream have found their way into scholarly analyses. In one version, cited by Carl Jung in ''The Psychology of Transference,'' Kekule discovered the benzene ring after dreaming of ''the Royal Marriage,'' the image of a dancing king and queen used by medieval alchemists as a symbol of conjunction. In another version, Kekule dreamed of a self-devouring snake alchemists of the 3d century A.D. devised to symbolize the underlying unity of nature. In others, the dream involved six snakes, or six monkeys linking hands and tails.

Dr. Wotiz has discovered that the monkey version was apparently first published in 1886, in a tongue-in-cheek ''professional'' journal. This parody, written in straight-faced scientific style, actually fooled some nonscientists, who later quoted passages from it in serious papers of their own, Dr. Wotiz said. Kekule himself may have been involved in the joke. Among other spoofs, the ''journal'' reports a fictitious scientific meeting at which a ''Mr. Aujust Kuleke'' presided and described a dream in which monkeys use their hands and feet ''to grasp and hang on to other objects.''

The first historical mention of the snake dream appears to have been by Kekule himself, in an extemporaneous speech at a benzene symposium in 1890. In this speech, Dr. Wotiz said, Kekule recounted a dream he had had in the winter of 1861-62 while dozing in front of a fire in Ghent, Belgium, where he was a professor of chemistry. The dream was that of the self-devouring snake, which, Kekule said, led him to the benzene ring.

Whether Kekulé did dream about a snake biting its tail or not, is not really that important. It makes a nice story and we always like to listen to one.