Teens in Shanghai Are Good in Math, Indonesians, Not So Good

December 04, 2013
The results for the 2012 Program for International Student Assessment of the Organisation for Economic Co-operation and Development (OECD) are now available. This exam is administered to 15-year old students. The exam is expected to measure how able students are to function productively in society. The age indicates the length of basic education expected across the world. It is 9 to 10 years. For the United States, students taking this exam are generally from second year high school. PISA therefore generally assesses the quality of middle school and the first two years of high school in the US.

Students from the Far East are among the top scorers this time. Results are usually presented in tabulated form. This presentation does not show how far the scores really are from each other. Fortunately, the Wall Street Journal provides the following figure (which also compares the results against the 2009 exam):

By laying down the scores on a linear scale, the differences in scores are much easier to see. The average PISA math scores of students from Shanghai, Singapore, Hong Kong, Taiwan and South Korea are clearly much higher than those of the other countries. Going down the graph, it does take a long time to see the other countries in East Asia, Thailand and Indonesia.

The above figure, however, only shows the average scores. Standardized tests are usually not a hundred percent reliable in ranking good, better and best students. However, standardized exams are quite accurate in detecting deficiencies. Thus, a more useful number to look at is the percentage of students taking the exam that are deemed passing. In PISA, this is level 2:


At Level 2 students can interpret and recognise situations in contexts that require no more than direct inference. They can extract relevant information from a single source and make use of a single representational mode. Students at this level can employ basic algorithms, formulae, procedures, or conventions. They are capable of direct reasoning and making literal interpretations of the results. (Copied from OECD PISA web page)

The following is an example of a question that is at this level:

Level 2 is the baseline of proficiency considered by the OECD. The table next to the question above shows the percentage of students from each country who managed to answer level 2 questions correctly. Here, a bar graph illustrates better the results:

PISA 2012 likewise have components in reading and science and the corresponding results are shown in the following figures:

The above figures highlight how well students from East Asia have scored in these exams. Their bars in the above figures are colored red and it should be quite obvious that in all three graphs; Math, Science and Reading, the top portion is filled with red bars. The United States' scores are in green and these generally fall near the middle of each graph. The other countries in East Asia that participated in PISA 2012 are colored in yellow; Malaysia, Thailand and Indonesia. Unlike Singapore and Vietnam, these countries are nowhere near the top. In fact, Indonesia is at the bottom. Nearly three out of four 15-year old Indonesians do not pass level 2, the level necessary for an individual to function fully in a society. How is democracy possible in such a situation when a super majority can not even tell the difference between buying two liters of oil at $3.00 and four liters of oil at $5.00?

The Philippines has not participated in this assessment but given the past TIMSS scores of the country; 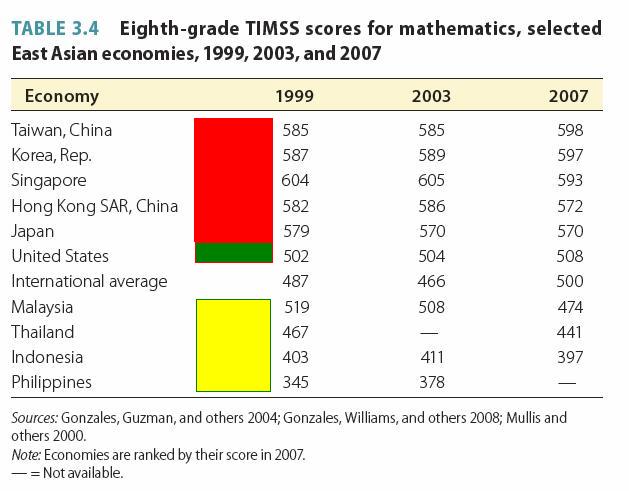 the trends in its National Achievement Exams; 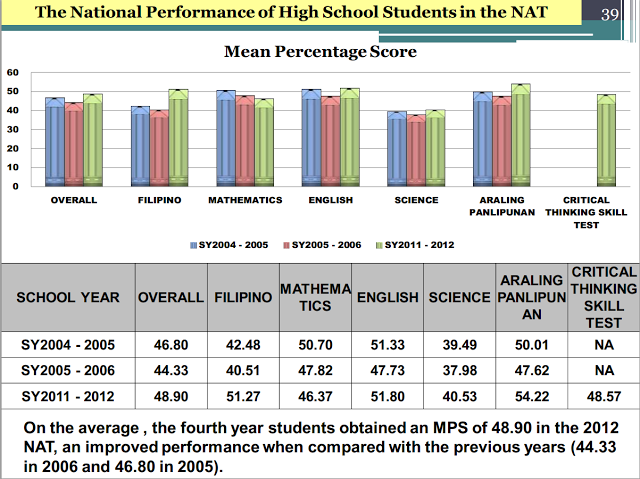 and the fact that these standardized exams do strongly correlate with each other, it is not difficult to guess which color applies to the Philippines.