A Ranking of Universities in Emerging Economies

December 13, 2013
"Without higher education basic education cannot progress" is a conclusion that can be reached after reading Karuna Chanana's book, "Transformative Links between Higher Education and Basic Education". Universities have three roles in society: research, training and outreach. These three functions are not independent from each other and for any university to be deemed worthy of the label "institution of higher learning", it must address all three. A university may choose to focus on one of these and such can be clearly stated in its mission. Nevertheless, the fact that research, training and outreach are truly inseparable, neglecting two of the functions to concentrate on only one does not really work. Thus, there may be instances where a university is currently prominent in undergraduate education. That same university may not be on the top when it comes to research. However, this does not mean that such university is not currently engaged in research simply because an excellent undergraduate education can not exist without research-active faculty.

In the United States, U.S. News and World Report publishes a ranking of universities to help parents and their children choose their college. The ranking takes into account selectivity in the entering class (This includes ranking in high school and scores in standardized tests), graduation and retention rates, class sizes, per-student spending, high school counselor assessments, and alumni giving. These factors clearly center on what is deemed to be directly beneficial to an undergraduate student. In this particular ranking, Georgetown University ranks 20th. A similar ranking, the Forbes' list, places Georgetown University 26th overall (24th among private colleges, 18th among research institutions, and 17th in the northeast section of the US). One must keep in mind the purpose of these rankings: To help high school graduates choose their college. The US has a developed economy and it can therefore afford to have higher institutions of learning that focus on providing excellent undergraduate education. In stark contrast, for a developing country, it is imperative that its higher institutions of learning deliver on all three functions: research, instruction and outreach. This need is even greater when the country also faces challenges in basic education. Basic education requires policies guided by evidence from research. Basic education requires teachers who are trained in colleges. Basic education requires participation of higher education faculty. Hence, rankings like those of the U.S. News maybe useful to parents, but for a country that is aiming to compete and thrive in a global economy, such assessment may be irrelevant.

There are several global rankings of universities. One example is the Times Higher Education World University Rankings which rely mainly on data provided by Thomson-Reuters. It uses five criteria: teaching (30%), research (30%), citation (30%), industry (2.5%) income, and international outlook (7.5%). With this ranking methodology, Georgetown University is 160th among world universities and 62nd among US universities.

To help gauge how universities in emerging economies or developing countries are performing, a separate ranking has been employed so that only the universities in these nations are considered. (The following figures are copied from The Times Higher Education BRICS & Emerging Economies Rankings 2014): 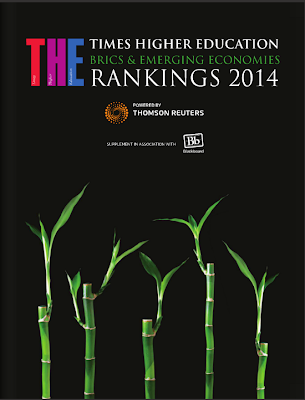 BRICS stands for Brazil, Russia, India, China and South Africa. These are the countries that are regarded as representatives of economies that may lead the world in the future. The ranking, however, includes not only these 5 nations, but the other countries considered as emerging economies as well. These are shown on the map below. 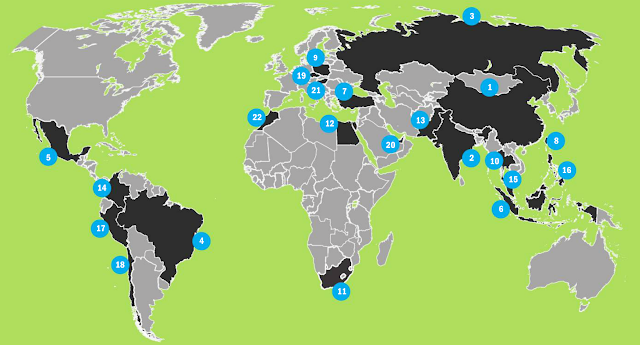 The number shown near each emerging economy on the map above is the ranking according to Gross Domestic Product. The idea is to gauge whether this ranking parallels the university ranking. Lines drawn connecting the GDP standing of a country to the number of universities it has on the top 100 list should not be intersecting if the rankings according to economy and universities are indeed parallel. And the following graph illustrates this comparison showing not too many lines intersecting: 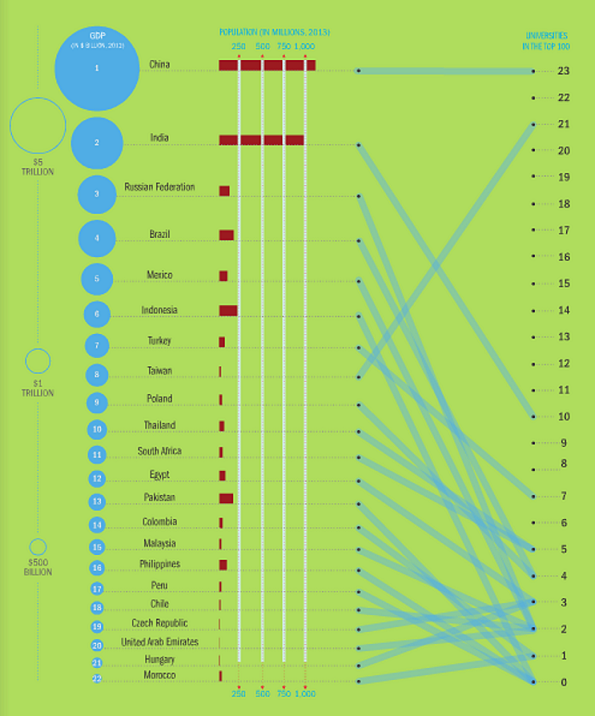 Clearly, half of the top 100 higher institutions of learning in emerging economies have been captured by these three countries, China (23), Taiwan (21) and India (10). Next in the university ranking is Turkey, which has 7. Like Taiwan, Turkey seems to be an overachiever as well. Russia and Brazil, although ranking well in economy size, only has 2 and 4, respectively, in the top 100 list.

The problems in basic education in the Philippines, as highlighted in numerous posts on this blog are concentrated at the two ends of education: early childhood education and higher education. Poverty creates huge learning gaps right at the very beginning. The current educational system in the Philippines is unable to assign resources where these are most needed and tracking of students according to socio-economic status happens as early as kindergarten. Kindergarten, albeit universal, suffers greatly in lack of quality due to the use of volunteers or contract workers as teachers. At the other end, higher institutions are not doing their job in discovering new knowledge. Research output on education is very low while education reforms are touted as based on evidence. Policies are drawn from opinions and misconceptions, not from peer-reviewed research. The new basic education curriculum attempts to address the challenges and failures of Philippine basic education in the middle, not at the ends where the problems truly arise. Additional years in high school and a spiral curriculum in the math and sciences are not the answers to the problems in the Philippines. These will not address the lack of research and poor early childhood education. Deciding what General Education courses can be taught in high school is not even tangential to the real problems Philippine basic education faces. DepEd K+12 is really a huge loss in time, opportunity and money. These are, unfortunately, things the Philippines simply cannot afford to squander.

The following is the list of top 100 universities in emerging economies.