Performance for Pay: Attracting Teachers to Where They Are Most Needed

December 10, 2013
"Performance for Pay" is different from "Performance Based Bonus". The former comes before the fact while the latter comes after. In "Performance for Pay", the additional salary comes with responsibilities. It is not a reward for supposedly good performance. It is an incentive to take on a more challenging task. Numerous studies have shown that performance based bonus or merit pay does not work in education. Dana Goldstein enumerates well known cases in the United States where bonuses have not led to improvement in education outcomes in Slate's "What Happens When Great Teachers Get $20,000 to Work in Low-Income Schools?". The article, however, highlights one instance where results seem promising. Here is an excerpt: 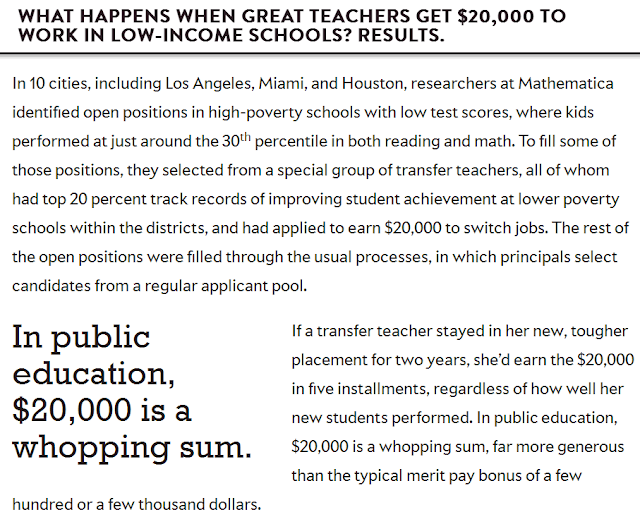 The details of this study can be found in a report published by the Mathematica researchers:

The design of the experiment is illustrated in the following figure and excerpt:

And the results are summarized in the following figures: 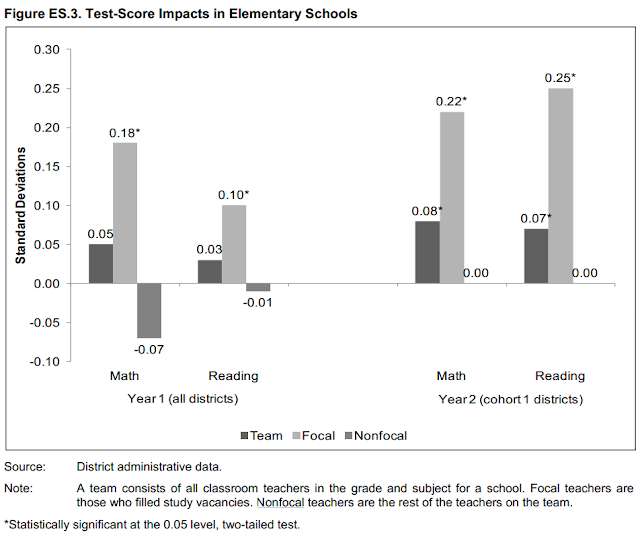 There are substantial positive effects in elementary school. Such, however, is missing in middle school. This again illustrates that interventions have a greater chance of succeeding in early childhood education, not in the later years.

The study also notes that $20,000 attracted only a small number of effective teachers to take on the more challenging task. $20,000 is not a small change so this clearly shows that salaries alone do not dictate what a teacher would choose. The working environment especially the quality of the principal in a school matters as well.