December 08, 2013
Nelson Mandela gave a powerful speech that touches on education during a treason trial in April of 1964. Mandela was accused because of his help in founding Umkhonto we Sizwe (Spear of the Nation), the military wing of the African National Congress. Mandela was convicted on four counts: two under the Sabotage Act which qualified for the death penalty, one under the Suppression of Communism Act and one under the Criminal Law Amendment Act, and was sentenced to life imprisonment. The speech should be an inspiration to all who dream of an education that is provided to all children, regardless of race and socio-economic class. Here is the speech:

"Our fight is against real and not imaginary hardships or, to use the language of the State Prosecutor, 'so-called hardships’. Basically, My Lord, we fight against two features which are the hallmarks of African life in South Africa and which are entrenched by legislation which we seek to have repealed. These features are poverty and lack of human dignity, and we do not need communists or so-called 'agitators’ to teach us about these things.

South Africa is the richest country in Africa, and could be one of the richest countries in the world. But it is a land of extremes and remarkable contrasts. The whites enjoy what may well be the highest standard of living in the world, whilst Africans live in poverty and misery. The complaint of Africans, however, is not only that they are poor and whites are rich, but that the laws which are made by the whites are designed to preserve this situation.

There are two ways to break out of poverty. The first is by formal education, and the second is by the worker acquiring a greater skill at his work and thus higher wages. As far as Africans are concerned, both these avenues of advancement are deliberately curtailed by legislation.

I ask the court to remember that the present Government has always sought to hamper Africans in their search for education. There is compulsory education for all white children at virtually no cost to their parents, be they rich or poor. Similar facilities are not provided for the African children, though there are some who receive such assistance. African children, however, generally have to pay more for their schooling than whites.

The Government often answers its critics by saying that Africans in South Africa are economically better off than the inhabitants of the other countries in Africa. I do not know whether this statement is true and doubt whether any comparison can be made. But even if it is true, as far as African people are concerned, it is irrelevant. Our complaint is not that we are poor by comparison with people in other countries, but that we are poor by comparison with white people in our own country, and that we are prevented by legislation from altering this imbalance.

The lack of human dignity experienced by Africans is the direct result of the policy of white supremacy. White supremacy implies black inferiority. Legislation designed to preserve white supremacy entrenches this notion. Menial tasks in South Africa are invariably performed by Africans. When anything has to be carried or cleaned the white man will look around for an African to do it for him, whether the African is employed by him or not. Because of this sort of attitude, whites tend to regard Africans as a separate breed. They do not look upon them as people with families of their own; they do not realise that we have emotions - that we fall in love like white people do; that we want to be with their wives and children like white people want to be with theirs; that we want to earn money, enough money to support our families properly, to feed and clothe them and send them to school.

The only cure is to alter the conditions under which Africans are forced to live. Above all, My Lord, we want equal political rights, because without them our disabilities will be permanent. I know this sounds revolutionary to the whites in this country, because the majority of voters will be Africans. This makes the white man fear democracy.

But this fear cannot be allowed to stand in the way of the only solution which will guarantee racial harmony and freedom for all. It is not true that the enfranchisement of all will result in racial domination. Political division, based on colour, is entirely artificial and, when it disappears, so will the domination of one colour group by another. The ANC has spent half a century fighting against racialism. When it triumphs as it certainly must, it will not change that policy.

During my lifetime I have dedicated my life to this struggle of the African people. I have fought against white domination, and I have fought against black domination. I have cherished the ideal of a democratic and free society in which all persons will live together in harmony and with equal opportunities. It is an ideal for which I hope to live for and to see realised. But, My Lord, if it needs be, it is an ideal for which I am prepared to die.” 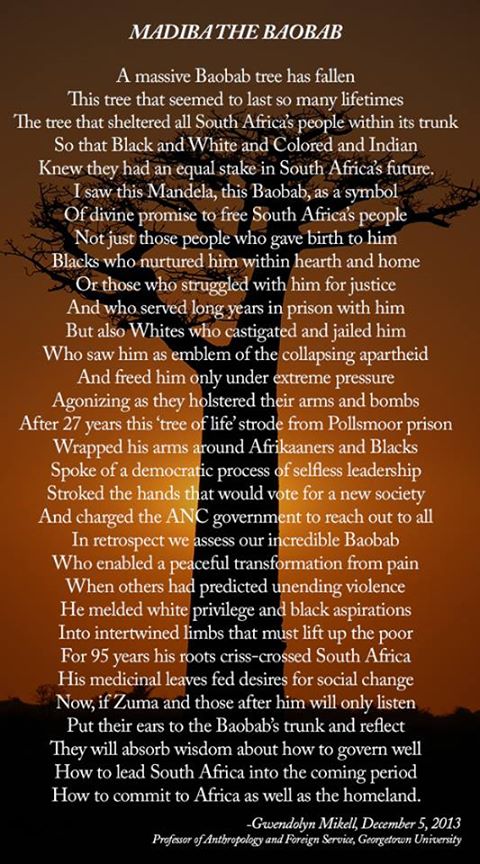 Commentaries Education for All