Light and Sleep, Technology and Learning

December 16, 2013
Sleep deprivation interferes with children learning and memory as well as their general physical and mental health. There is a hormone called melatonin, which regulates the sleeping cycle. Light suppresses the production of melatonin. In particular, the short wavelength (near blue) component of visible light reduces levels of melatonin. The bright sunlight in the morning wakes up a person while the less blue (more red) light during sunset signals the body to get ready for sleep. This rhythm usually matches the day and night period keeping a person alert during the day and drowsy in the evening. The absence of blue light during the morning and its presence during the evening can alter the wake-sleep cycle of a person. Without the required suppression of melatonin in the morning, the rhythm is not properly entrained and the expected onset of melatonin when the light gets dimmed is delayed. On the other hand, exposure to blue light in the evening hours continues to suppress melatonin production. Both can lead to sleep deprivation.

Artificial light, of course, is one of man's widely used technology. Incandescent bulbs light up a classroom. The main purpose of these bulbs is to illuminate so the light emitted is tailored to provide the highest efficiency for the visual system, which prefers longer wavelengths (far from blue). Exposure during the day only to artificial light therefore cannot provide the blue light necessary to keep the biological sleep-wake cycle performing at its normal phase. On the other hand, there are now a myriad of devices from hand held to computer monitors and televisions that make use of self-luminous displays. These are screens equipped with light-emitting diodes (LED) with a short wavelength (blue range). These two factors can indeed combine to make it difficult for individuals to get a good night sleep. For children, this can affect learning.

There are studies that have examined ways artificial lighting affects melatonin production. One study that looks at the effects of lack of exposure to blue light in the morning was made by researchers at the Lighting Research Center in Rensselaer Polytechnic Institute. The article, "Lack of short-wavelength light during the school day delays dim light melatonin onset (DLMO) in middle school students", is published in the journal Neuro endocrinology letters: 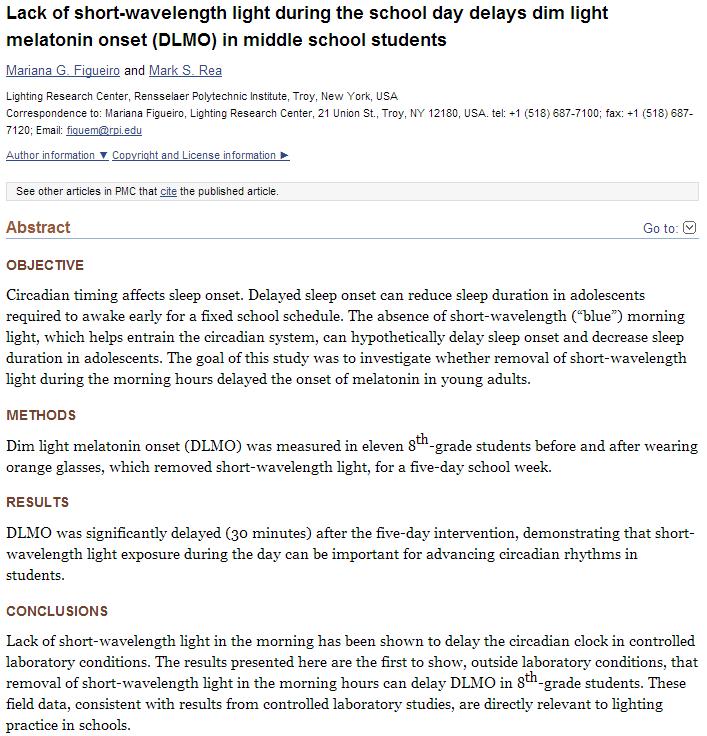 One study that examines the other side, artificial exposure to blue light in the evening hours, is the following:

Many people spend an increasing amount of time in front of computer screens equipped with light-emitting diodes (LED) with a short wavelength (blue range). Thus we investigated the repercussions on melatonin (a marker of the circadian clock), alertness, and cognitive performance levels in 13 young male volunteers under controlled laboratory conditions in a balanced crossover design. A 5-h evening exposure to a white LED-backlit screen with more than twice as much 464 nm light emission {irradiance of 0,241 Watt/(steradian × m2) [W/(sr × m2)], 2.1 × 1013 photons/(cm2 × s), in the wavelength range of 454 and 474 nm} than a white non-LED-backlit screen [irradiance of 0,099 W/(sr × m2), 0.7 × 1013 photons/(cm2 × s), in the wavelength range of 454 and 474 nm] elicited a significant suppression of the evening rise in endogenous melatonin and subjective as well as objective sleepiness, as indexed by a reduced incidence of slow eye movements and EEG low-frequency activity (1–7 Hz) in frontal brain regions. Concomitantly, sustained attention, as determined by the GO/NOGO task; working memory/attention, as assessed by “explicit timing”; and declarative memory performance in a word-learning paradigm were significantly enhanced in the LED-backlit screen compared with the non-LED condition. Screen quality and visual comfort were rated the same in both screen conditions, whereas the non-LED screen tended to be considered brighter. Our data indicate that the spectral profile of light emitted by computer screens impacts on circadian physiology, alertness, and cognitive performance levels. The challenge will be to design a computer screen with a spectral profile that can be individually programmed to add timed, essential light information to the circadian system in humans.

The above paper even compares the effects from two different computer monitors, non-LED versus LED:


And the effects on levels of melatonin are shown below:

Technology affects our lives in more than one way. Technology affects learning likewise in so many ways. While there is so much cheering when it comes to technology supposedly transforming education, one must be extra cautious. Technology can have other unforeseen side effects....