What Singapore Did to Succeed

April 18, 2013
With the Times' ranking of universities not showing any institution from the Philippines in the top 100, questions are raised on what must be done (at least, by some people who read the articles in this blog). Of course, there is that initial reaction calling for Philippine born scientists to return home and help improve the situation in the country. It is true that the return of expertise is badly needed. Attracting Filipino scientists abroad to return may be necessary. In the early days of this blog, I received a comment from an American scientist. It related the story of Singapore:

One could try to reproduce some of what Singapore has done.

Concentrate on a few key areas for development of a world-class scientific industrial infrastructure. There is no need to be comprehensive, at this point. Just concentrate on an area that the Phillipines could excel in. Use a research park (as a carrot) to lure some ex-pat talent (as well as foreign talent) to the country. Give the research park some independence (i.e. create a new university) and keep the problem people's fingers out of the pie. Concentrate on the future -- where growth will be in the coming decades. An obvious thing is to work in photovoltaics. China is big in this area and might be happy to work with a country with an English-speaking workforce. Bring back the best Phillipine diaspora in this area, and augment with foreign manpower.

Many decades ago, Singapore invested in petrochemical processing and pharmaceutical processing, and is now reaping rewards. Crude oil is shipped to Singapore for refining because the IP is protected, the government is business-friendly, and the workforce speaks English. Same with pharma.

Singapore is working on biotech now (they have a huge "Biopolis" project). Long-story short -- pick some kind of strategic technology sector to work in, lure business to come, and begin development of a world-class academic capability in this narrow area.

The problem seems to be that the Phillipines has a HUGE dysfunctional system in place. It cannot be scrapped overnight, without huge social upheaval. The country CAN build something good, but small, from scratch, but it takes leadership and vision, and the humility to admit when "you" need to bring in outsiders when "you" don't have the expertise to do this well using domestic talent.

Singapore is quite proud of what they have done, and would be happy to work with friendly neighbors and they could be very good allies in this effort.

The above is actually a very well-informed comment. It emphasizes in more than one way most of the characteristics enumerated by an OECD study, "Strong Performers and Successful Reformers in Education: Lessons from PISA for the United States": 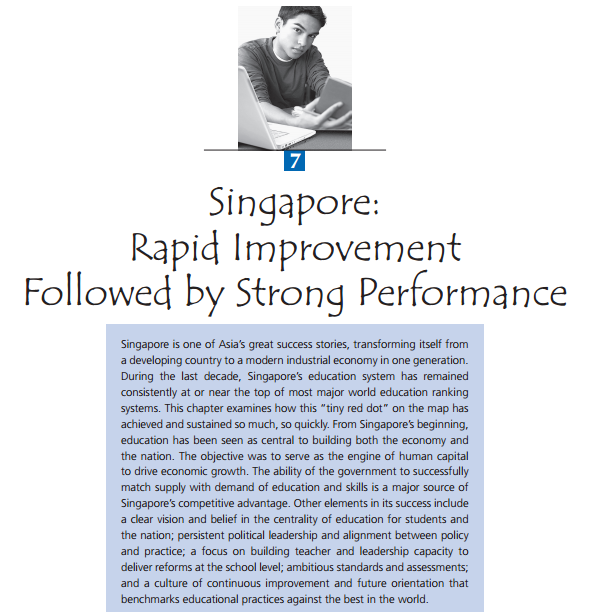 First, "Give the research park some independence (i.e. create a new university) and keep the problem people's fingers out of the pie." The autonomy and respect are essential. The OECD points out the following with regard to Singapore:

Strong central capacity and authority to act The ministry of education in Singapore is staffed by knowledgeable, pragmatic individuals, trained at some of the best universities in the world. They function in a culture of continuous improvement, constantly assessing what is and isn’t working using both data and practitioner experience. They respect and are respected by professionals in the schools. Whilst countries vary in whether the locus of authority is at the national state/province or local level, whoever is charged with developing strategy and holding authority would do well to emulate the competence and capacity of the Singapore ministry of education.

"Emulating the competence and capacity of the Singapore ministry of education" prescribes a certain level of experience. Experience in research and education have well-defined indicators that are internationally recognized. As exemplified by the Times' ranking of universities, research is measured by publication output and citations. Thus, those who are charged with power in the science and education sector of the government need to have demonstrated productivity in research.

Another characteristic of Singapore mentioned in the OECD report that parallels a concept in the comment I received is alignment:


Alignment of the education system to economic development goals

The strong link between education and economic development in Singapore has kept investment in education a central priority, made education policies highly pragmatic, led to high-quality mathematics and science and also to world-class vocational/technical education – an area where most countries fail. It has also kept education dynamic, expecting to change as conditions change rather than being mired in the past. While the tightness of the link may not be possible in less planned economies, bringing together economic and education policy makers, business and education leaders to continually assess changes in economic conditions and how education and economic development could better work together would strengthen both.

Finally, the need for talent to reach these goals was recognized early. The following did not happen over a short period of time but occurred with sustained effort:

A key instrument as Singapore intentionally navigated towards the global knowledge economy has been the government agency for Science, technology and research (A* Star), which provides generous funding for research and aims to attract top scientists and scientific companies. One million foreign nationals with scientific, technical or managerial skills have been encouraged to work in Singapore in international corporations and in higher education. Singapore’s three universities, and especially the national university of Singapore and Nanyang Technological university, have research partnerships with leading universities around the world with a focus in selected fields, including bioinformatics, information sciences and medical technologies.

No one could afford a million foreign nationals flooding into a small city in a year, or even a decade. Singapore of course started at a small scale.  In 1965, when Singapore became independent, it had no assets except its port and its people. Thus, it might be quite understandable why Singapore realized that education was key since human capital was all they had. The unemployment level was close to half the population. The Economic Development Board of Singapore writes:


With a GNP per capita of less than US$320, Singapore was a third-world nation with poor infrastructure and limited capital. Low-end commerce was the mainstay of the economy and the handful of industries that existed produced only for domestic consumption, leaving no room for direct foreign investment.

Singapore's leaders were determined right from the beginning and understood what was required to lift their country's status. And as the comment on my blog correctly points out: "The country CAN build something good, but small, from scratch, but it takes leadership and vision, and the humility to admit when "you" need to bring in outsiders when "you" don't have the expertise to do this well using domestic talent."